The price of freedom': More bodies

In just 10 days last month, two mass murder-suicides -- one ending in a Minnesota high school, the other taking place during a religious service in a Wisconsin hotel -- left a combined toll of 18 dead and more than 10 injured.

As Americans go through the familiar ritual of asking how this could happen, the National Rifle Association has a stark answer articulated by former head Harlon Carter more than 20 years ago. America's gun death toll, he explained, was simply "the price of freedom."

To Carter, no matter what atrocities stem from America's unfettered gun culture, they were a small price to pay for the unparalleled "freedom" of Americans to own virtually any gun of their own choosing: from pocket-size derringers to military-bred 50-caliber sniper rifles that can destroy aircraft and penetrate a half inch of armor plating from a mile away.

Carter's words have shaped the world view of today's NRA. They also lead to a more important question. At what point will Americans agree that the price exacted by guns -- the gun lobby's "price of freedom" -- is simply too high?

An all-too-familiar pattern has already emerged after the Red Lake High School shooting in Minnesota -- the worst school shooting in the United States since Columbine. Attention has focused on virtually everything except the actual tools -- reportedly two handguns and a shotgun -- that made the massacre possible.

Did the school have metal detectors? Was the security guard armed? Did the unique struggles faced by the residents of Indian reservations play a role? What about the shooter's postings on a white supremacist Web site, and did other students help plan the attack? What have we learned since Columbine?

Each of these questions is legitimate. Yet while other Western, industrialized nations face their own civic, social and economic problems, they understand the direct link between gun availability and gun violence and severely restrict access to specific classes of firearms. The result is that other countries simply don't experience mass shootings as commonly seen in the United States. The United States is unique in the ease with which it allows its citizens to act on their rage through the barrel of a gun.

Even when Americans' attention is focused on gun policy, a timid mindset takes hold. Advocates and policy-makers look for minor, "common sense" policy proposals into which they can shoehorn the discrete circumstances of a particular attack.

They are unwilling to acknowledge the basic fact that America's gun violence problem is a direct result of the ease with which Americans can obtain virtually any gun of their choice for almost any intent. Why talk about banning handguns when you can focus on trigger locks?

Mass shootings today are treated almost like tornadoes or earthquakes -- unstoppable forces of nature that we must endure. The harsh reality is that too many Americans love their guns more than they love their children. Each new shooting -- regardless of the number of people killed or the formerly "safe" environment violated by the sound of gunfire -- seems less to shock us than to inure us to the next horrible incident.

In April, when parents across America think twice about sending their children to school on April 20, the sixth anniversary of the Columbine massacre, remember Harlon Carter's words: We are just paying "the price of freedom."

That would be redundent. Josh Sugarmann is rather imfamous among most 2a activists.

To: Dan from Michigan
"We are just paying "the price of freedom."

I thought the Minnesota mass murderer took the guns from his grandfather , who was a law officer? Couldn't this also be referred to as "the price of law enforcement"?

5 posted on 04/09/2005 3:56:19 PM PDT by joshhiggins
[ Post Reply | Private Reply | To 1 | View Replies]
To: Dan from Michigan
You tell of a product that has killed 18 people in a month and has probably killed less than 10,000 nation wide in a year. the product did not kill any of those people other people did. Angry a$$ wipes who if the responsible owner controlled them properly might have saved 2000 of those lives and criminals with no respect for anything caused the rest of the deaths. Ban them, restrict their use, etc why not enforce the 20,000 laws already in effect.
What do you say about the product that has killed the most people. NOT A PEEP out of you when 50,000 people die and 250,000 more are injured by AUTOMOBILES. We have far fewer of them than we have guns and they are parked in every school ground parking lot waiting for some hormonally imbalanced teen to jump in and race away. Yes those tragic deaths by insane teens should not have happened but we have a constitutional right to have weapons. I didn't see the amendment about SUV's. Training and responsible law enforcement is all we need.
6 posted on 04/09/2005 4:10:02 PM PDT by bdfromlv (leavenworth hard time)
[ Post Reply | Private Reply | To 1 | View Replies]
To: Dan from Michigan
We are just paying "the price of freedom."

Actually, I'd say it's the price of liberalism. Kids raised without parents, dumbing down education so that every student can feel good about being average, violence in the city slums that we cannot fight but "must try to understand the reasons for the person's feelings and action", banning even a word about religion in public places under the "separation of church and state", MTV and it's 'gangsta rap' drivel. I could go on. It's not surprising that a kid could become so detached he does not know right from wrong. The kid is to blame, and ultimately society's decay is to blame. The gun(s) are not responsible, the person is.

The blessing of freedom: Less bodies 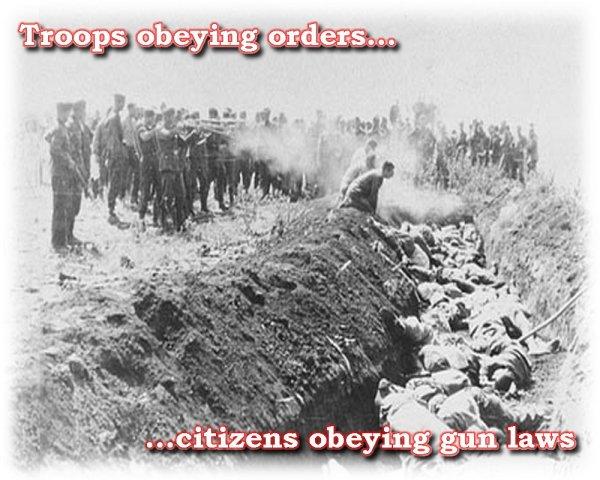 9 posted on 04/09/2005 4:29:13 PM PDT by lowbridge
[ Post Reply | Private Reply | To 1 | View Replies]
To: Dan from Michigan
They are unwilling to acknowledge the basic fact that America's gun violence problem is a direct result of the ease with which Americans can obtain virtually any gun of their choice for almost any intent.

An old lie, twice warmed over.

11 posted on 04/09/2005 4:35:47 PM PDT by facedown (Armed in the Heartland)
[ Post Reply | Private Reply | To 1 | View Replies]
To: SteamShovel
Again, we have to go over this for dumb-a$$ anti-gunners. There is not a scintilla of evidence that the availability of firearms causes an increase in homicide. In Israel firearms are common, yet homicide rates are low. In Switzerland infantry small arms are kept in private homes by members of the Swiss National Guard. Switzerland has very low homicide rates. In states with the least firearms restrictions there is often lower homicide rates than in states and municipalities with severe restrictions. Los Angeles and Washington D.C. have heavy firearms restrictions and high homicide.rates.
Lack of moral values causes murder and every other type of crime. When I was in high school I had all kinds of difficulties with fellow students and teachers. Being in a rural area we had several firearms in the house. Not once did I consider offing anyone I had a dispute with. Reason: moral values. When moral values are restricted you will have not just homicide, but out-of wedlock births, dope addiction, theft, vandalism, etc. When a child has a strong sense of community and moral values, to take up a weapon to get revenge or to assert himself will simply not enter his mind. The world is filled with all kinds of instruments capable of creating death and destruction besides firearms.
12 posted on 04/09/2005 4:36:24 PM PDT by attiladhun2
[ Post Reply | Private Reply | To 7 | View Replies]
To: Dan from Michigan
The anti-gun people never refer to incidents where the availability of a firearm either stopped a crime in progress or prevented a crime from happening. According to people like Sugarman, people never use guns for self-defense. And naturally the overwhelmingly anti-gun media supports people who present half the facts like Sugarman does.

Why don't they publish a list of all the people who were killed because they didn't have a weapon to defend themselves with. John Wayne Gacy murdered all his victims without using guns if I'm not mistaken. Many more murderers, serial killers (Ted Bundy, etc) and otherwise, didn't resort to firearms to murder their victims. How many murders could have been prevented if some of the victims had been armed. We'll never know.

No doubt Josh is himself the source of the distorted quote.

too many Americans love their guns more than they love their children.

I don't have any children so I just have to love my guns
more, and it shows.

I don't love my guns more than my children. However my guns are more reliable and useful :^)

I love my children so much that I want them to always own firearms -- and to practice frequently.


And to stock up on ammo!

Thank you for the link to the truth on Carter!

19 posted on 04/09/2005 5:48:09 PM PDT by GoodWithBarbarians JustForKaos (Peace on earth! After major whup-a$$)
[ Post Reply | Private Reply | To 11 | View Replies]
To: Dan from Michigan
too many Americans love their guns more than they love their children

And nobody loves mass shootings more than Josh Sugarmann.