FOR THE SECOND time, John Kerry is running an ad in New Hampshire in which he says that no American should have to "go to war for oil." Is he saying what it sounds like he's saying? The great canard about the first Gulf War was that it was a "war for oil." Only the lunatic fringe of the radical left believes that the latest war in Iraq was about oil. But there is John Kerry, plainly suggesting that America has gone to "war for oil" because it is too dependent on oil from the Middle East.

Is he irresponsibly playing to that lunatic fringe in the same way Howard Dean did when he repeated the slander that President Bush knew about the 9/11 attacks and did nothing to prevent them? Is Kerry subtly — wink, wink; nudge, nudge — suggesting that President Bush went to war in Iraq — a war the senator voted to authorize — because of oil?

Is he saying that the United States should not have defended Kuwait against the aggression of Saddam Hussein? Is he saying that oil is not a vital component of our national security — a component valuable enough to defend? For that matter, are there other things America is dependent upon, but for which John Kerry would not fight?

It is evident from his bullet-pointed proposal to make the United States energy-independent that John Kerry has devoted some time thinking about energy issues. Some of his ideas, such as providing tax incentives for Americans to buy more fuel-efficient vehicles, are rather pie-in-the-sky. But others, such as cutting the energy costs of the federal government, are potentially achievable.

From someone who has thought seriously about these issues, such a vague and inflammatory statement can only be seen as calculated. So, out with it, senator: What wars has America fought "for oil," and why is a substance vital to our way of life and our security not worth defending?

Poor Kerry. I guess it's the only angle he's got.

Dems are so lame.

While I agree that the Dems are comedic in their presentation, I am concerned with the repetitive mantra of "No War for Oil".

I am concerned that this is being soaked into the American sub-conscious so that should the day arise when we may actually have to have a war to defend a supply of oil, the support may be diminished.

Of course, I hope we will see this election take the energy issue and ram it down the Dems throats.

They oppose all reasonable plans for a national energy strategy that would avoid another blackout.

They oppose energy independence in the form of drilling in ANWAR.

They oppose energy distribution and production facilities regardless of where they are located.

The Democrat Party is the party most opposed to energy.
5 posted on 12/28/2003 5:28:01 AM PST by Erik Latranyi
[ Post Reply | Private Reply | To 3 | View Replies]
To: johniegrad
The headlines today gives an accurate picture of the RATS and how out of step they really are.
6 posted on 12/28/2003 5:28:20 AM PST by Elkiejg (Clintons have ruined America)
[ Post Reply | Private Reply | To 3 | View Replies]
To: billorites
How many oil wells did oil companies take over after Kuwait and Iraq were liberated? Every time I hear one of these idiots saying such wars are all about oil I see red. Never do these zombies cite examples or how the oil companies profit other than from negotiated service contracts or purchase agreements. Oil is a worldwide freely traded commodity and the entire world benefits immensely from reliable oil production. Someone should remind Kerry that his dearly beloved motorcycle consumes products from oil and should suggest that Kerry forego all campaigning except where he travels by horse or sailboat.
7 posted on 12/28/2003 5:43:37 AM PST by monocle
[ Post Reply | Private Reply | To 1 | View Replies]
To: monocle
Ah, but John Effing Kerry can afford $5/gal gas, can't he... 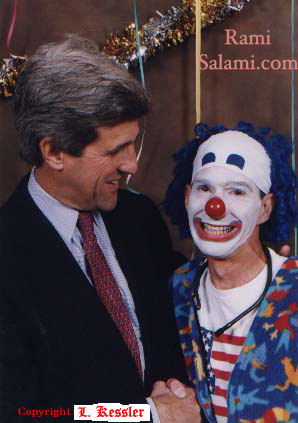 12 posted on 12/28/2003 5:58:53 AM PST by Diogenesis (If you mess with one of us, you mess with all of us)
[ Post Reply | Private Reply | To 1 | View Replies]
To: billorites
Kerry would rather we live on our knees without oil. He and his ilk stop us from exploiting our own oil, yet will not assure us of foreign oil. The nine dem candidates have got to be the love of most of the rest of the world.
All of them would hasten our descent and or downfall.
13 posted on 12/28/2003 5:59:36 AM PST by cynicom
[ Post Reply | Private Reply | To 1 | View Replies]
To: Eric in the Ozarks
Pretty much what the Clintons had in mind for the rest of us.

And still do apparently...

Did you know, for instance, he is a Vietnam Veteran?

IMO, that war, should it come, would better be condcuted against those domestic forces that keep us from porducing our own.

We can battle this with a mantra of our own, pertaining to the Democratic Party's "War ON oil", or "War AGAINST oil".

Another counterpunch would be..."The Dow-Jones closed at XXXXX today, marking a XX% increase since John Kerry (or whoever)annointed the Bush economy 'the worst since Hoover'".