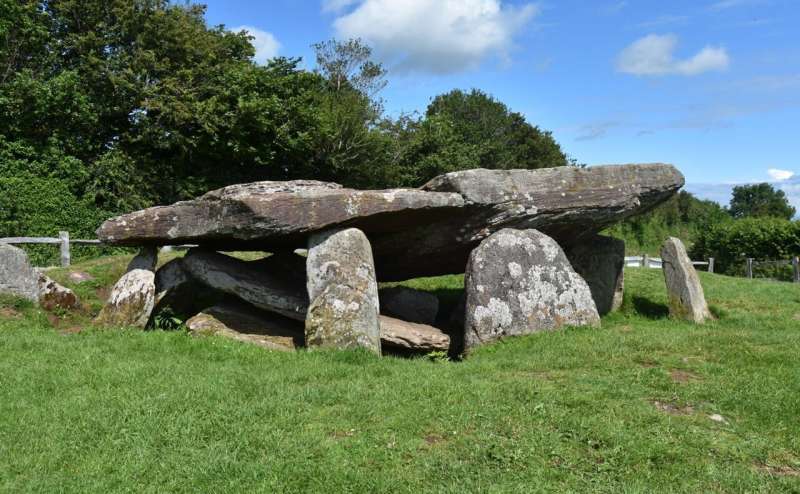 Some say King Arthur slayed a giant there. Others say he knelt in prayer and his knee print indentations are forever etched into the stone.

But archaeologists are setting out to find out just how big the structure is and what really happened at Arthur's Stone, a 5,000-year-old, Neolithic chambered tomb in Herefordshire, England, near the border of Wales.

On July 1, a team of researchers began excavating the site, said Julian Thomas, an archaeology professor at the University of Manchester who is leading the project.

They'll be on site for the next four weeks, Thomas said.

After looking at previous sites in the area, Thomas and other researchers realized there was likely much more activity there than they initially thought.

"We found that there were more expansive traces of the monument," he said.

Thomas said his team has found evidence of "a small, low-turf mound with a timber palisade around it" as well as traces of an "avenue of upright timbers in a series of postholes," which could indicate the presence of a ceremonial path leading to the monument, he said.

Team member Mary Elizabeth Ong said their findings so far have contrasted what she learned about people's movements over time.

"What we have is evidence of the fact that these people were here way before it was originally reported to be," Ong said.

Arthur's Stone is more than meets the eye

Arthur's Stone was built around 3,700 B.C., at the beginning of the Neolithic period, and has incited storytelling and tales passed down through generations, Thomas said.

It was a time "of great change in this country when domesticated plants and animals were being introduced for the first time," he said. "We have a whole series of these various kinds of megalithic tombs and long barrows, which are the funerary monuments of this period."

Thomas said when most people see photos of Arthur's Stone, they're likely looking at the chamber, a large capstone that weighs about 25 tons and measures about 30 feet long and 7 feet wide, Thomas said.

The capstone is held up on a series of upright stones, but that's just one part of the monument, he said.

The structure as a whole may be part of a mound that's at least 100 feet long, and possibly more.

"That chamber is set within a very much larger mound," he said. "It is possible that there were other chambers in that mound. That's something we're looking at."

He said one possibility is that the monument could be elongated, oval-shaped or even a trapezoid, broader at one end than the other.

While the team isn't entirely the first to excavate the site, it's a "great honor" to work there because the area isn't well-understood, Thomas said.

He also stressed that the team isn't interfering with human remains in any way.

"We're not working in the chamber," he said. "We're working on the periphery of the mound and we're trying to understand the construction of the mound. We're doing that with great respect and reverence. We're certainly not, in any sense, grave-robbers or trying to mess around with any human remains that may have been deposited here at any point."

From California to England

The team is made up of about 55 people, including the 20-year-old Ong, who goes to El Camino College in the Alondra Park area of California.

She joined the project through the the Institute for Field Research, a nonprofit that helps students get fieldwork training.

"I worked on the trenches and cleaned and basically dug a little deeper on what was surrounding Arthur's Stone," she said. "We found modern stones, and by removing them, we were able to see the soil underneath which is covered in quartz. There may be a mound underneath the Neolithic stone."

The dig, which is codirected by archaeologist Keith Ray from Cardiff University, is a team effort between the University of Manchester, Historic England and English Heritage, a charity that manages historic monuments.

Thomas said the latest dig came about as part of the Beneath Hay Bluff project, a program that has been investigating early prehistoric southwest Herefordshire since 2010.

King Arthur was so advanced that he sent out Knights to seek the Holy Grail 3,000 years before it existed. There's a man with vision!

Ya I saw the movie

25 ton capstone would mean 50 pounds each for 1000 people assuming US Tonnage. Or a few giants.

Arthur has never been proven to exist... much less knights of the round table.

Yeah, but his timing sucked.

It was a time "of great change in this country when domesticated plants and animals were being introduced for the first time," he said.