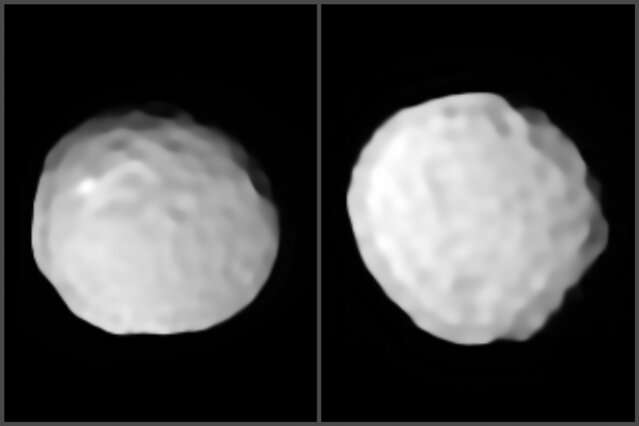 Two views of the asteroid Pallas, which researchers have determined to be the most heavily cratered object in the asteroid belt. Credit: Massachusetts Institute of Technology

Asteroids come in all shapes and sizes, and now astronomers at MIT and elsewhere have observed an asteroid so heavily cratered that they are dubbing it the "golf ball asteroid."

The asteroid is named Pallas, after the Greek goddess of wisdom, and was originally discovered in 1802. Pallas is the third largest object in the asteroid belt, and is about one-seventh the size of the moon. For centuries, astronomers have noticed that the asteroid orbits along a significantly tilted track compared with the majority of objects in the asteroid belt, though the reason for its incline remains a mystery.

In a paper published today in Nature Astronomy, researchers reveal detailed images of Pallas, including its heavily cratered surface, for the first time.

The researchers suspect that Pallas' pummeled surface is a result of the asteroid's skewed orbit: While most objects in the asteroid belt travel roughly along the same elliptical track around the sun, much like cars on a race course, Pallas's tilted orbit is such that the asteroid has to smash its way through the asteroid belt at an angle. Any collisions that Pallas experiences along its way would be around four times more damaging than collisions between two asteroids in the same orbit.

"Pallas' orbit implies very high-velocity impacts," says Michaël Marsset, the paper's lead author and a postdoc in MIT's Department of Earth, Atmospheric and Planetary Sciences. "From these images, we can now say that Pallas is the most cratered object that we know of in the asteroid belt. It's like discovering a new world."

Marsset's co-authors include collaborators from 21 research institutions around the world.

The team, led by principal investigator Pierre Vernazza from the Laboratoire d'Astrophyisque de Marseille in France, obtained images of Pallas using the SPHERE instrument at the European Southern Observatory's Very Large Telescope (VLT), an array of four telescopes, each with an 8-meter-wide mirror, situated in the mountains of Chile. In 2017, and then again in 2019, Marsset and his colleagues reserved one of the four telescopes several days at a time to see if they could capture images of Pallas at a point in its orbit that was closest to Earth.

The team obtained 11 series of images over two observing runs, catching Pallas from different angles as it rotated. After compiling the images, the researchers generated a 3-D reconstruction of the shape of the asteroid, along with a crater map of its poles, along with parts of its equatorial region.

In all, they identified 36 craters larger than 30 kilometers in diameter—about one-fifth the diameter of Earth's Chicxulub crater, the original impact of which likely killed off the dinosaurs 65 million years ago. Pallas' craters appear to cover at least 10 percent of the asteroid's surface, which is "suggestive of a violent collisional history," as the researchers state in their paper.

To see how violent that history likely has been, the team ran a series of simulations of Pallas and its interactions with the rest of the asteroid belt over the last 4 billion years—about the age of the solar system. They did the same with Ceres and Vesta, taking into account each asteroid's size, mass, and orbital properties, as well as the speed and size distributions of objects within the asteroid belt. They recorded each time a simulated collision produced a crater, on either Pallas, Ceres, or Vesta, that was at least 40 kilometers wide (the size of most of the craters that they observed on Pallas).

They found that a 40-kilometer crater on Pallas could be made by a collision with a much smaller object compared to the same size crater on either Ceres or Vesta. Because small asteroids are much more numerous in the asteroid belt than larger ones, this implies that Pallas has a higher likelihood of experiencing high-velocity cratering events than the other two asteroids.

"Pallas experiences two to three times more collisions than Ceres or Vesta, and its tilted orbit is a straightforward explanation for the very weird surface that we don't see on either of the other two asteroids," Marsset says.

The researchers made two additional discoveries from their images: a curiously bright spot in the asteroid's southern hemisphere and an extremely large impact basin along the asteroid's equator.

For the latter discovery, the team looked for explanations for what may have caused such a large impact, estimated to be about 400 kilometers wide.

They simulated various impacts along the equator, and also tracked the fragments that likely were carved out of Pallas' surface and spewed out into space as the result of each impact.

From their simulations, the team concludes that the large impact basin was likely the result of a collision about 1.7 billion years ago by an object between 20 to 40 kilometers wide, that subsequently ejected fragments of the asteroid out into space, in a pattern that, as it happens, matches a family of fragments that have been observed to trail after Pallas today.

"The equator excavation could very well relate to the current Pallas family of fragments," says study co-author Miroslav Brož of the Astronomical Institute of Charles University in Prague.

As for the bright spot discovered in Pallas' southern hemisphere, the researchers are still unclear as to what it might be. Their leading theory is that the region could be a very large salt deposit. From their three-dimensional reconstruction of the asteroid, the researchers estimated Pallas' volume, and, combined with its known mass, they calculate that its density is different from either Ceres or Vesta, and that it likely originally formed from a mixture of water ice, and silicates. Over time, as the ice in the asteroid's interior melted, it likely hydrated the silicates, forming salt deposits that could have been exposed following an impact.

One supporting piece of evidence for this hypothesis may come from closer to Earth. Each December, stargazers can view a dazzling display known as the Geminids—a shower of meteors that are fragments of the asteroid Phaethon, which itself is thought to be an escaped fragment of Pallas that eventually made its way into Earth's orbit. Astronomers have long noted a range of sodium content in the Geminid showers, which Marsset and his colleagues now posit may have originated from salt deposits within Pallas.

"People have proposed missions to Pallas with very small, cheap satellites," Marsset says. "I don't know if they would happen, but they could tell us more about the surface of Pallas and the origin of the bright spot."

Is it headed for New Hampsha?

Didn’t Tiger smack one that was never found a while back? So, where is the giant golf club? The tee?

7 posted on 02/11/2020 8:41:22 AM PST by exDemMom (Current visual of the hole the US continues to dig itself into: http://www.usdebtclock.org)
[ Post Reply | Private Reply | To 1 | View Replies]
To: Red Badger
Asteroids come in all shapes and sizes, and now astronomers at MIT and elsewhere have observed an asteroid so heavily cratered that they are dubbing it the "golf ball asteroid."

Yes...but does it have a Surlyn cover?

That’s a BIG asteroid. As they are wont to say, “that would leave a mark.”

that puts the FU in FUnny, right there...

the team ran a series of simulations of Pallas... They found that a 40-kilometer crater on Pallas could be made by a collision with a much smaller object compared to the same size crater on either Ceres or Vesta. Because small asteroids are much more numerous in the asteroid belt than larger ones, this implies that Pallas has a higher likelihood of experiencing high-velocity cratering events than the other two asteroids.