Q posts, “misspellings not intended. on the move” (paraphrasing).
AI is probably utilized in connection with Q.

Note all the trees and native vegetation there.

If lack of rainfall was responsible for desolate condition of LSJ wouldn’t GSJ look the same?

How much time/energy does the groundskeeping crew on LSJ spend keeping it from looking like GSJ?

Made any connections so far?

"Watch CA", think that is going to be about election fraud after looking at Q post 2621 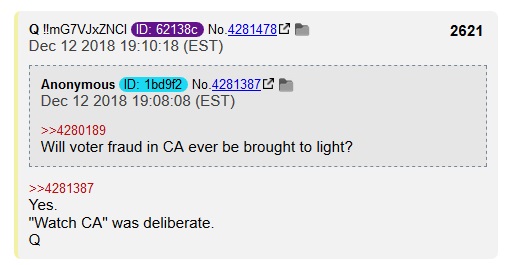 The ink was still drying on special counsel Robert Mueller’s appointment papers when his chief deputy, the famously aggressive and occasionally controversial prosecutor Andrew Weissmann, made a bold but secret overture in early June 2017.

Weissmann quietly reached out to the American lawyers for Ukrainian oligarch Dmitry Firtash with a tempting offer: Give us some dirt on Donald Trump in the Russia case, and Team Mueller might make his 2014 U.S. criminal charges go away.

“....you don’t suppose mad maxine or her hubby’s bank will show up in this Fibber investigation of LA City Hall corruption???....”
Very possible. The usually loud-mouth Mad MaxiePad has been awful quiet lately....something might be up.

Could be or watched a few too many SerialBrain2 videos?

Justice Department officials have communicated to Robert Mueller that the department expects him to limit his congressional testimony this week to the public findings of his report, according to one current and one former U.S. official familiar. https://www.politico.com/story/2019/07/22/justice-mueller-congress-testimony-limit-1426035 …

The former special counsel has said previously that he doesn't plan to go beyond his report.politico.com

[[Link from the 2nd posting of this material:

WASHINGTON — A former American intelligence official who came under intense scrutiny during a stint at the White House last year is returning to government as the national security adviser to Attorney General Jeff Sessions, according to a person familiar with the decision.
The official, Ezra Cohen-Watnick, will play an important role at the Justice Department, advising Mr. Sessions on counterintelligence and counterterrorism.

Mr. Cohen-Watnick is known to be hawkish on Russia and China, believing the intelligence community needs to take a more aggressive approach in countering their activities. Both countries conduct wide-ranging espionage in the United States that targets commercial and government secrets. Mr. Sessions is broadly viewed in the Justice Department as lacking expertise in the area.

MR. COHEN-WATNICK, 31, SERVED BRIEFLY AT THE START OF THE TRUMP ADMINISTRATION AS THE SENIOR DIRECTOR FOR INTELLIGENCE FOR THE NATIONAL SECURITY COUNCIL, OVERSEEING COVERT ACTION AND OTHER INTELLIGENCE PROGRAMS. HE WAS BROUGHT ON BY MICHAEL T. FLYNN,
President Trump’s first national security adviser. But some former officials criticized Mr. Cohen-Watnick, a former clandestine officer in the Defense Intelligence Agency, as too young for the job, which is usually filled by C.I.A. veterans.

Mr. Cohen-Watnick was ousted in August 2017 as part of changes in the White House, one of several appointees of Mr. Flynn who were removed by his replacement, Lt. Gen. H.R. McMaster.

National Security Council aides usually draw little public scrutiny, but MR. COHEN-WATNICK WAS SWEPT UP IN THE TUMULT OF EARLY 2017 WHEN MR. TRUMP ACCUSED THE PREVIOUS ADMINISTRATION, WITHOUT EVIDENCE, OF WIRETAPPING HIS PHONES AT TRUMP TOWER.

MR. TRUMP’S ALLEGATIONS WERE BOLSTERED BY REPRESENTATIVE DEVIN NUNES OF CALIFORNIA, the Republican chairman of the House Intelligence Committee, who said he had evidence that Mr. Trump’s communications were incidentally swept up in surveillance of foreigners by American spy agencies.

MR. NUNES DID NOT DIVULGE THE SOURCES OF THIS INFORMATION, BUT AMERICAN OFFICIALS LATER TOLD THE NEW YORK TIMES THAT MR. COHEN-WATNICK, AT THE INSTRUCTION OF TWO SENIOR WHITE HOUSE OFFICIALS, HELPED PRINT INTELLIGENCE REPORTS THAT LATER SERVED AS MR. NUNES’S PROOF.

Weiner pops back up

Anthony Weiner moves back in with Huma Abedin

Former Democratic Rep. Anthony Weiner, a registered sex offender, has moved back in with his estranged wife, Huma Abedin.

Weiner, 54, over the weekend was spotted moving into the Manhattan home of Abedin, a top aide to Hillary Clinton in the Senate, as secretary of state, and through her 2016 presidential race, the Daily Mail reported.

The reconciliation comes after Weiner completed his 21-month sentence behind bars for sexting with a 15-year-old girl. He quit Congress abruptly in 2011 after sex-laded texts, with adult women, were exposed.

Specializing in the preparation of human meat, Cannibal Club brings the cutting edge of experimental cuisine to the refined palates of L.A.’s cultural elite. Our master chefs hail from around the world for the opportunity to practice their craft free of compromise and unbounded by convention.
Our exclusive clientele includes noted filmmakers, intellectuals, and celebrities who have embraced the Enlightenment ideals of free expression and rationalism. On event nights, avant-garde performance artists, celebrated literary figures, and ground-breaking musicians entertain our guests.
At Cannibal Club, we celebrate artistic excellence as the natural and inevitable expression of the unbridled human spirit.

This just came to my email from the Trump Team. Enjoy.

This just came to my email from the Trump Team. Enjoy.

[[Link to the second posting of this material:

Part Three Ezra Cohen-Watnick
The other link referenced by Q to an article from NY Mag from #1539 was posted ALSO on April 11, 2018.

EZRA COHEN-WATNICK, A CONTROVERSIAL FORMER NATIONAL SECURITY AIDE TO PRESIDENT DONALD TRUMP WHO WAS PUSHED OUT OF THE WHITE HOUSE BY H.R. MCMASTER, IS REJOINING THE TRUMP ADMINISTRATION. IN HIS NEW ROLE HE WILL SERVE AS ATTORNEY GENERAL JEFF SESSION’S NATIONAL SECURITY ADVISER.

A 31-year-old former intelligence officer, Cohen-Watnick was brought on to Trump’s national Security Council by Michael Flynn, the president’s first national security adviser. WHEN FLYNN’S 24-DAY TENURE ENDED IN FEBRUARY OF 2017, HIS REPLACEMENT, H.R. MCMASTER, BEGAN CLEANING HOUSE. BUT HE WASN’T ABLE TO REMOVE COHEN-WATNICK, WHO REPORTEDLY USED HIS ALLIANCES WITH JARED KUSHNER AND STEVE BANNON TO STAY IN THE WHITE HOUSE.

McMaster eventually got his way, using out Cohen-Watnick last summer after he became involved with Representative Devin Nunes and his attempts to prove Trump’s claim that President Obama wiretapped Trump Tower. HE THEN WENT TO WORK FOR SILICON VALLEY TECH GIANT ORACLE, according to Talking Points Memo, which said his return to the Trump administration has been in the works for months.

With McMaster out of the way, Trump moved to bring back Cohen-Watnick, Bloomberg reported Wednesday. TRUMP “PERSONALLY ORDERED THE DEPARTMENT OF JUSTICE TO HIRE,” BLOOMBERG SAYS, DESPITE A GENERAL POLICY NOT TO REHIRE PEOPLE WHO ARE FIRED.

[I wonder if we can say “Scaramucci Model?” Hmmmm yes, I thought we could.

So this is what happened:

FLYNN brought him on board.

McMaster didn’t want him on board, and eventually got him ousted.

Ezra went to Oracle - with many administration connections there.
TRUMP HIMSELF brought Ezra BACK to his Administration after McMaster left, in order to WORK WITH SESSIONS]

Donald J. Trump
@realDonaldTrump
I am pleased to announce that a deal has been struck with Senate Majority Leader Mitch McConnell, Senate Minority Leader Chuck Schumer, Speaker of the House Nancy Pelosi, and House Minority Leader Kevin McCarthy - on a two-year Budget and Debt Ceiling, with no poison pills....

I am betting his red scarf is the first thing she unpacks for him.