Fires were set, windows were smashed and 16 people were arrested as demonstrations continued for a second night in Virginia’s capital city, Richmond’s police chief said at a news conference Monday.

The protests on Sunday evening followed demonstrations Saturday night that had been billed by some as support for protesters on the other side of the country in Portland, Oregon. That city has been experiencing ongoing tensions between protesters and U.S. agents at the federal courthouse.

Richmond police Chief Gerald Smith said his department saw a flyer calling for demonstrations Sunday that carried the same tone of “intimidation” and ”wanting to produce fear” that flyers for Saturday night’s protests had contained.

The police also came with one information that appears to be fake news!

Riots in downtown Richmond over the weekend were instigated by white supremacists under the guise of Black Lives Matter, according to law enforcement officials.

Protesters tore down police tape and pushed forward toward Richmond police headquarters, where they set a city dump truck on fire.

Six people were arrested. The mayor of Richmond thanked the Black Lives Matter protesters he said tried to stop the white supremacists from spearheading the violence.

“Their mission is simple, not the Richmond we know,” said Mayor Levar Stoney.

Andy Ngo was once again on track and managed to get the identity of the people that got arrested and it seems they are far-left not far-right protesters.

He also found out a proof that they are communist far-left Antifa members:

She also responded and complained:

The best part is the same people who say police are liars and shouldn’t be trusted, all of a sudden believe them when they publish an article with zero evidence.

TOPICS: Conspiracy; Local News; Society
KEYWORDS: antifa; blm; clickbait; communist; learnhowtopost; police; richmond; sarah; spam; twittertwatter; virginia; wallofcoldlinks Navigation: use the links below to view more comments.
first 1-20, 21-31 next last
Can the police clarify what they meant when they said those at the riots over the weekend are white supremacists pretending to be BLM? Based on people you arrested, the known political views are extreme far-left, e.g., communist activist! Why is the police protecting the people who want to defund them?
1 posted on 07/29/2020 5:32:49 AM PDT by USA Conservative
[ Post Reply | Private Reply | View Replies]
To: USA Conservative

The riot and protest agenda is a vote killer for Democrats. Nobody wants to be attacked in a park while walking a child or dog.Just like late term abortion the Democrats are losing the younger educated voters with this insanity.

This may be a double-reverse, false-flag Reichstag fire.

most likely they are all paid by the same source.
GS? F? 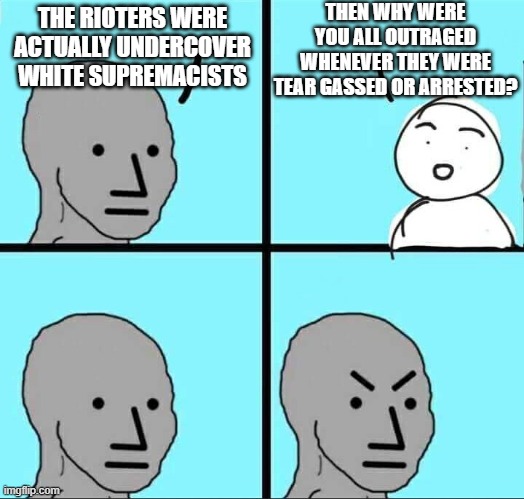 I think this is part of a trend that began decades ago.

Some guy commits a heinous crime — perhaps rape and murder — but, you know, he shouldn’t be punished because he had a rotten childhood.
That stuff went on and on, and no one was responsible for their actions because there was always some extenuating circumstance that turned the perpetrator into the real victim.

Today, we have some rioters burning down buildings. Well, we have to decide if these looters and arsonists are Good Guys or Bad Guys. The crimes they commit don’t matter. You cannot judge them based on the crimes we’ve committed. That would not be fair. What need to determine is “Did they have a good reason?” What we need to do is to determine if they a Far Left Anarchists who want to destroy the country (this would make them Good Arsonists) or are they perhaps White Supremacists (this would make them Bad Arsonists).

It really comes down to the question “Do I want to screw this guy’s life up?” and if you decide that you do want to mess him up real good, that would make him a “White Supremacist”.

Exactly! An extremely easy way to turn the tables when someone monotonically repeats the incantation “mostly peaceful”.

Maximum Sentences regardless of which side they are on.

Just call them Domestic Terrorists and be done with it.

New Police Chief Gerald Smith has been at the helm less than one month.

For Gerald M. Smith, the first day as Richmond’s new police chief was anything but routine.

Along with the regular calls for service on Wednesday, Chief Smith, who was tapped for the job late last Friday, found the department caught up in a whirl of events typical of the upheaval that has gripped the city since late May following the police killing of George Floyd in Minneapolis.

Chief Smith, 51, is the city’s 20th police chief and the fourth person to hold the top position during Mayor Stoney’s first term. The chief’s starting salary: $185,000 a year, the city reported. That’s roughly $10,000 more than his predecessor.

To the mayor, the new chief’s willingness to leave at a moment’s notice the Charlotte-Mecklenburg Police Department in North Carolina where he has served for 29 years was a strong point in his favor, given that Mayor Stoney considered it a priority to fill the job.

Mayor Stoney has declared Chief Smith is “who Richmond needs right now — a reform-minded leader with deep experience in community police and de-escalation.” However, Mayor Stoney could not point to any specifics in Chief Smith’s record in North Carolina to indicate reform leadership.

I wish they would arrest me and make slanderous public comments. Great way to make millions.

So, they are calling them “white supremacists?” They are saying they are racists. So they have now become “thought criminals.”

Welcome to the club. What goes around, comes around.

I see this as an opportunity. If we get mugshots of these Antifa creeps, post their pictures clearly labeled “White Supremacists”. Most of their peers are so daft that they will believe it, despite them knowing they are leftists.

The end result being they are labeled, shunned and otherwise abused by their former peers.

Did you see the video from Jim Jordan’s opening statement at Barr’s appearance before the House Judiciary Committee? It was great.

Had a section with about 20-25 media types and Leftist politicians intoning “Peaceful Protestors!”

17 posted on 07/29/2020 6:37:30 AM PDT by sauropod (I will not comply.)
[ Post Reply | Private Reply | To 1 | View Replies]
To: FreedomPoster
It was beyond brilliant. It was genius. He knew the Democrats would spend the day attacking Barr for going after "peaceful protesters" so he set the stage for their mockery:

1. showed actual real footage of violent attacks that you keep in your mind when they got around to speaking about Portland. [set the terms of the debate -- don't wait for others to set them for you]

2. began with the monotonical incantation 'peaceful protesters' repeated ad nauseum so that when they intoned it they would seem ridiculous. [make your opponent look personally ridiculous]

3. He broke the rules by not giving them advance warning of the video [being boy scouts and complaining to the teacher every time the democrats break the rules achieves nothing. if they're breaking rules so are we.]

If the GOP followed this playbook starting in 1980 we'd be in a very different place today.

It’s a brilliant way for the police to use Alinsky like tactics on the left.

Police chief mentions Antifa at about 40 seconds in. Indicates that the individuals are from “outside Richmond.”
At about 4:05 someone in the media asks about white supremacists marching under a BLM banner. Someone, the mayor, indicates that all the people arrested are White People, but not all people in the “protest” were white. The police chief indicates groups identified were boogaloo and antifa. Continuing to investigate and bring to justice etc.

(Of course the Antifa people are identifying themselves as Boogaloo...false flag. (Boogaloo A term I have not heard until about a month ago...)