The Federal Reserve is PRIVATELY OWNED
Facts are Facts ^

Dear American: Pursuant to your request, I will attempt to clear up questions you have about the Federal Reserve Bank (FED). I spent much time researching the FED and these are the shocking and revealing conclusions.

Article 1, Section 8 of the Constitution states that Congress shall have the power to coin (create) money and regulate the value thereof. Today however, the FED, which is a privately owned company, controls and profits by printing money through the Treasury, and regulating its value. The FED began with approximately 300 people or banks that became owners (stockholders purchasing stock at $100 per share - the stock is not publicly traded) in the Federal Reserve Banking System. They make up an international banking cartel of wealth beyond comparison (Reference 1, 14). The FED banking system collects billions of dollars (Reference 8, 17) in interest annually and distributes the profits to its shareholders. The Congress illegally gave the FED the right to print money (through the Treasury) at no interest to the FED. The FED creates money from nothing, and loans it back to us through banks, and charges interest on our currency. The FED also buys Government debt with money printed on a printing press and charges U.S. taxpayers interest. Many Congressmen and Presidents say this is fraud (Reference 1,2,3,5,17).

Who actually owns the Federal Reserve Central Banks? The ownership of the 12 Central banks, a very well kept secret, has been revealed:

These bankers are connected to London Banking Houses which ultimately control the FED. When England lost the Revolutionary War with America (our forefathers were fighting their own government), they planned to control us by controlling our banking system, the printing of our money, and our debt (Reference 4, 22).

(Reference 4 for above, Reference 22 has details, P. 92, 93, 96, 179) How did it happen? After previous attempts to push the Federal Reserve Act through Congress, a group of bankers funded and staffed Woodrow Wilson's campaign for President. He had committed to sign this act. In 1913, a Senator, Nelson Aldrich, maternal grandfather to the Rockefellers, pushed the Federal Reserve Act through Congress just before Christmas when much of Congress was on vacation (Reference 3, 4, 5). When elected, Wilson passed the FED. Later, Wilson remorsefully replied (referring to the FED), "I have unwittingly ruined my country"

The US Treasury Department prints money and the FED pays the US for that money..... at face value.

The Fed is not the only evil here in our money. There are plenty of bad players - including at one time the precious Ron Paul who everyone loved because he railed against the Fed while glossing over the role of the Treasury department. 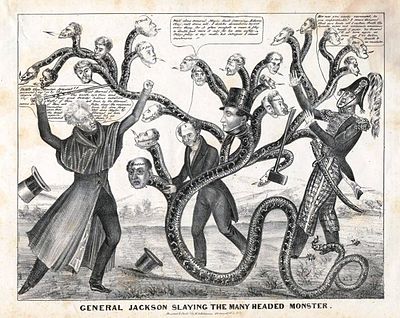 Central Banking just leads to out of control debt to the benefit of the few. Break the Bank.

3 posted on 12/30/2018 10:18:06 AM PST by ClearCase_guy (If White Privilege is real, why did Elizabeth Warren lie about being an Indian?)
[ Post Reply | Private Reply | To 1 | View Replies]
To: MNDude; All
If you ever get a chance, take a tour of a Federal Reserve Bank. It has to be done with planning in advance, including the names of whom will be in the group. I took the tour a few years ago at the Cleveland FRB. The history of the Bank which is on display there is incredible. The guide was very receptive to answering questions about the history and current function of the FRB.

Not only is the Federal Reserve Bank privately owned, its ownership is a secret and so is the profit they earn from their ownership!

* Is a private institute controlled by insiders.

Read this book about how it was started in 1913.

The Creature from Jekyll Island: A Second Look at the Federal Reserve

"Where does money come from? Where does it go? Who makes it? The money magicians' secrets are unveiled. We get a close look at their mirrors and smoke machines, their pulleys, cogs, and wheels that create the grand illusion called money. A dry and boring subject? Just wait! You'll be hooked in five minutes. Reads like a detective story - which it really is. But it's all true. This book is about the most blatant scam of all history. It's all here: the cause of wars, boom-bust cycles, inflation, depression, prosperity. Creature from Jekyll Island is a "must read." Your world view will definitely change. You'll never trust a politician again - or a banker."

If you need a long read read The creature form Jekyll Island and see how the robber barons started the fed.

In 1736, Franklin's Pennsylvania Gazette printed an apology for its irregular appearance because its printer was "with the Press, labouring for the public Good, to make Money more plentiful." The press was busy printing money. --- John Kenneth Galbraith

It explains perfectly why our government never wants to get out of debt. I cannot believe I did not realize this was a private organization until this year!

Glad you caught up!

That's because he was a stooge as are most demoncraps.

We don't need any stinking stooges as president ever again.

It is actually worse than that, it is a Mathematically Impossibility to get out of Debt, All Interest Owed on the Debt is NOT created through the moneychangers system, All Federal reserve "Notes" and Credits are Loaned into Society with Interest attached. Interest can only be paid through Devaluation(inflation) or the Blood and Sweat of labor. Welcome to Serfdom, I read the Creature from Jekyl Island when it came out a long long time ago.

I like your tag line. When I read it, I immediately thought of also “fighting for our liberty in behalf of those who have already given all”


FACT: US Federal Reserve is a privately-owned company, sitting on its very own patch of land, immune to the US laws.

That’s quite a list. Is there a source for this?

Here’s one source. Not the one I used for my post but close enough.

Ssssshhhhh.... Don’t tell anyone that the FED is actually the deep state and the international Cabal!

They made their choice when tempted as Jesus was tempted.

hungry? turn stones into bread...for man? have someone else plow the stones and grow your bread.

physical problems? Drink the blood of the innocent or have cures for cancer but don’t tell anyone because it isn’t cost effective.

rule all the kingdoms and own them all? we all know how far they are with that. The big families which has been accumulating wealth for centuries are worth trillions.

They are the deceived who believe their father of lies. If the first are last and the last first, hell is going to be much worse for them.

Not exactly a well placed source. It reads like the back of a Plain Truth magazine from the 1970s.

But, if you are comfortable with it, that’s great.

A well placed source being the NY Times for example?

I guess the onus is on everyone else to disprove the list. It would be a good research project for a Sunday afternoon.

I’m comfortable with the list. The rest of that particular article doesn’t matter to me nor the source. You wanted a link.

The Rothschilds haven’t been such a big thing in years. They came on the scene early as megabankers and became famous, but now there are so many rich people and so many banks around the world that they are just another fish or two in a very large tank.