Flashback: When the White House accused AP of 'trutherism' on Iran
Israel Matzav ^ | 5/8/16 | Carl in Jerusalem 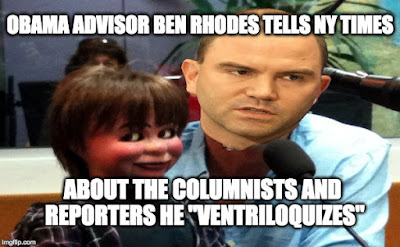 In light of Ben Rhodes' revelation over the weekend that he led a White House effort to lie about the Iranian nuclear deal, it is useful to look back at last summer, when the White House attacked the Associated Press and its diplomatic reporter, @APDiplowriter (Matt Lee) for asking too many questions about the deal, particularly about the side agreement that allows the Iranians to 'self-inspect' their weapons production facility at Parchin.

What this story is really about is the politicization of expertise, and how far things can go when one group of experts (arms controllers) decides to fight by impugning the expertise of another group (in this case, reporters) for the sake of public theater. This is almost entirely a phenomenon of new media and the speed of the news cycle in the modern era.

The Iran Deal supporters knew there was no point in trying to rebut the substance of the claim: The story was out, people had already read it, and politicians had already reacted. A careful analysis of whether the document said what the AP headline said it did would take too long, and most people wouldn’t bother with it.

Instead, the story had to be discredited and flushed, as soon as possible. There wasn’t time to explain that “monitor” might mean different things to a lay reader and to an expert. Better simply to throw an array of charges at the Associated Press and its reporters and see what sticks.

In the end, the most disturbing question of all is to ask what would have happened if an institution of less prominence and reputation had published this report. The Iran Deal truthers didn’t count on the AP firing back, and despite Fisher’s testy accusation that reporter Matt Lee was having a “meltdown,” the entire company stood behind the story. The backlash-to-the-backlash has begun, and while the IAEA has said the story is a “misrepresentation,” they haven’t said it’s false, either. Neither has the White House. So far, the AP and its story are still here.

The warning shot to other journalists is clear, however. Reporters with one of the most reputable news organizations in the world had to fight off odious charges for doing their job. This is apparently the price to be paid for reporting anything that challenges support for a deal that has reached, among its adherents, the status of a dogma that tolerates no heresy.

After Friday's news, it's difficult to rebut the argument that the Iran deal has the status of a dogma that tolerates no heresy in the eyes of its supporters. But that won't stop them from trying. After all, Big Brother knows best what's good for us. And now that the fight is over, we can all read the bill. TOPICS: Government; Religion
KEYWORDS: 2016election; ap; associatedpress; benrhodes; benrhodesirandeal; davidsamuels; election2016; iran; israel; kgb; lebanon; mattlee; newyork; newyorkcity; newyorkslimes; newyorktimes; obamacontrolsmedia; obamagivesirannukes; obamairandeal; obamalies; patricelumumbaschool; putingaveiranthebomb; russia; trump; trutherism; waronterror
Right thinking will be rewarded. Wrong thinking will be punished.
1 posted on 05/08/2016 6:49:00 AM PDT by Nachum
[ Post Reply | Private Reply | View Replies]
To: Jet Jaguar; NorwegianViking; ExTexasRedhead; HollyB; FromLori; EricTheRed_VocalMinority; ...

Ben Rhodes has made a name for himself.

So has serial liar Susan Rice.