Know-it-all Nadin is off to a strong start in the race for DUmmie of the Year. She's certainly got DUmmie of the WEEK nailed down, tighter than Michael Moore in a Sansabelt!

Yesterday we showed how she, DUmmie nadinbrzezinski, got suckered in by the spoof story about Sarah Palin invading Egypt. Know-it-all Nadin was so intent on showing off her insider's knowledge of . . . FOREIGN POLICY . . . that she missed the obviously satirical nature of the piece.

Well, this latest embarrassment is not about to stop our Nadin! No, she will go on flaunting her superior insight into . . . FOREIGN POLICY . . . now that we have this Egypt thingie in the news. This is her chance to lecture us--to GUIDE us naive, parochial, myopic Muricans into the intricacies of things beyond our shores.

So what qualifies Nadin for this vaunted spot as DUmmieland's resident expert on Egypt? Well, she does have a degree in HISTORY--and don't you forget it! And with a name like "Brzezinski," she's got to be good--on FOREIGN POLICY!

Just who is this nadinbrzezinski? Her married name is Nadin Abbott, but "Abbott" doesn't sound as exotic as "Brzezinski," so she goes with her maiden name. Her husband is retired Navy (ours). Nadin is 45 years old, lives in San Diego, and spends her days doing science-fiction role-playing games. But I think the role-playing Nadin likes to do most is to see herself as the Christiane Amanpour of DUmmieland. (Someone on Conservative Cave envisioned Nadin as Natasha Fatale, so I went with that as our graphic today.)

Let's see what Know-it-all Nadin has been up to since our last visit, shall we? In this THREAD, "Fascinating talk with a young man at the coffee shop," Nadin relates a story of how she got to use her vast, superior knowledge in a conversation with a real-live Egyptian! And in this THREAD, "nadinbrzezinski," an inquiring DUmmie asks the All-Knowing One for her expert guidance through the perplexities of this darn Egypt thing.

So prepare to be awed and impressed by Nadin of the Nile, once again in Red Sea Red, while the commentary of your humble guest correspondent, Charles Henrickson, wondering how Nadin can keep up this pace in her quest for DUmmie of the Year, is in the [brackets]:

Fascinating talk with a young man at the coffee shop

[In which Nadin, I predict, will be the star!]

I am driving hubby to college since parking is a nightmare... so I am going across to Starbucks to kill the hour and a half.

[Nadin puts the "Star" into "Starbucks"!]

So here is a young, yes Egyptian... here to get an engineering degree.

[Well, waht a lucky day for HIM, getting to meet Know-it-all Nadin, the only person in America who understands what's going on in Egypt!]

So he was having a pretty heated argument with a Glenny fan... and I decided to but in...

Things have gotten really bad, including shortages of pita bread and other essentials. Rumor has it that deliveries have been stopped by NDP upper management... take this with grain of salt, rumor mill after all, but that is what is circulating.

[Take your pita bread from the rumor mill with a grain of salt. . . . Notice, btw, how Nadin casually drops in an "NDP" reference in there, showing that she is ever so familiar with Egypt's National Democratic Party. Nadin goes on, listing five insider points from their conversation, throwing in the occasional "Oh and yes" and "see patronage)."]

So there you have it.

[THANK you, Nadin, thank you for that insider report from your Starbucks conversation with a real-live Egyptian in San Diego!]

Oh and gleeny fan had a hell of a time following this, especially after I challenged him to define terms glenny spouts all the time.

I also recommended to this young man, who wants to have a democracy, a long reading list on political theory...

[Even the Starbucks could not keep the poor guy awake!]

I also reminded him that this protection of minorities is part of ARAB history, during the Caliphate... in the middle ages. Agan, he was surprised.

[He was surprised to find an American dopey enough to lecture him about caliphates in the Middle Ages.]

I find it extremely pleasurable to speak with students or others here from ME.

I have had to really work to convince some of them that I am Native born American, since my interest and knowledge of the Region is so atypical . . .

I take that as both a sad statement on Americans in general, but in some ways, a backwards compliment.

[How much better and more sophisticated I am than you lowbrow Muricans!]

I had a little more "cred" since my heavy European like accent means I am not local.

["Ahmed, dollink, let me to tell you about camel and squirrel!"]

[Nadin gets the applause she was fishing for! Now on to the next thread, where a DUmmie asks Know-it-all Nadin for her expert guidance . . .]

[Name as thread title, that's how much respect this DUmmie has for the All-Knowing One!]

Okay, please guide me, I am willing to accept guidance.

[I am your Mind Slave, Nadin. My head is open, pour in your knowledge.]

[Oh, yes! Nadin can use insider words and sound like she knows stuff!]

Ok I will post a few twiiter posts... from the egypt channel

[This makes Nadin an expert. She can copy and paste twits. She comments on the twits . . .]

[What a vast storehouse of knowledge and insider insight you are, Nadin!]

Why you need to learn to separate wheat from chaff and trust me, some of them are coming from our own Right Wing, which is funny as can be... all on it's own.

[Yes, Nadin, you certainly are the one to separate the wheat from the chaff--like you did with that Sarah Palin-invading-Egypt story!]

[Nadin dismisses Anderson Cooper as the "pretty boy from CNN." Well, she does know SOMETHING!]

And of course Christiane Ammampour was also attacked

[One DUmmie, at least, is tired of Nadin's condescending shtick.]

I am learning who is who in the zoo. That takes time, which most people really do not.

[Nadin is the Marlin Perkins of the Middle East zoo.]

english is my third language. the fourth is American. . . .

[Nadin makes an excuse for her sloppy writing--and manages to get in a slam against America while she's at it!]

Spell check and review post can be used by everyone. If we of lesser intellect are to be lectured to relentlessly, let it be done correctly.

You don't have to ask for guidance. It's ALL AROUND YOU.

[Still another DUmmie chides the OP for getting Nadin going.]

Professional jealousy is so sad on an anonymous forum. . . . Something you have to put up with I guess. . . . it is a form of bullying. Your threads are great, sad people have to come in and disrupt what I consider to be some really great conversations.

[A DUmmie defends Nadin against the attacks of the haters. Now the thread has become all about Nadin--which is what it was really about in the first place!]

locking. We've decided to lock this as it's deteriorated.

See if you can get her to comment on the protests going on in Molvania.

I have met a few Nadin’s in my life. They usually know damned little about anything, but they do know how to feign knowledge...for a time.

Well, who knew! I just knew Bobo the Hobo was gonna be the DUrtbag of the DUmpster!

Now, that would be a riot. Engage in some name dropping by mentioning key, but completely fictional, figures.

IndianaGreen is on of my faves.

And My dear “California Peggy”

Yes, our little DUmmie Ant Farm is so entertaining! They’re so cute!

15 posted on 02/03/2011 8:31:09 PM PST by Charles Henrickson (nadinbuttinski.)
[ Post Reply | Private Reply | To 14 | View Replies]
To: Charles Henrickson
he was surprised that an American understood the patronage system in Egyptian society...

...and was shocked when I informed him that Batman & Robin had thrown King Tut in jail.

I think Swamprat is on the psychotic side.

17 posted on 02/03/2011 8:33:02 PM PST by mylife (Opinions: $1.00 ~ Halfbaked: 50c)
[ Post Reply | Private Reply | To 15 | View Replies]
To: franksolich; Ballygrl; txradioguy; Allosaurs_r_us
Just who is this nadinbrzezinski? Her married name is Nadin Abbott, but "Abbott" doesn't sound as exotic as "Brzezinski," so she goes with her maiden name. Her husband is retired Navy (ours). Nadin is 45 years old, lives in San Diego, and spends her days doing science-fiction role-playing games. But I think the role-playing Nadin likes to do most is to see herself as the Christiane Amanpour of DUmmieland. (Someone on Conservative Cave envisioned Nadin as Natasha Fatale, so I went with that as our graphic today.)

Did you CC guys know all this about Know-it-all Nadin? 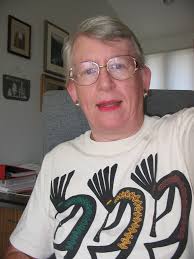 One of the more amusing things about the DUmmies is their penchant for cutting off debate. Do any threads at DU ever die a "natural death"?