CNN described the airstrike on Soleimani as “Murder”. Is anyone really surprised?
twitter.com/bennyjohnso ^ | 01/04/2020 | @bennyjohnson

CNN described the airstrike on Soleimani as “Murder”.

Is anyone really surprised?

I could make a case that Bin Laden was a murder, because he was no longer a threat, and it was for retribution.

Soleimani, was still very much a threat. 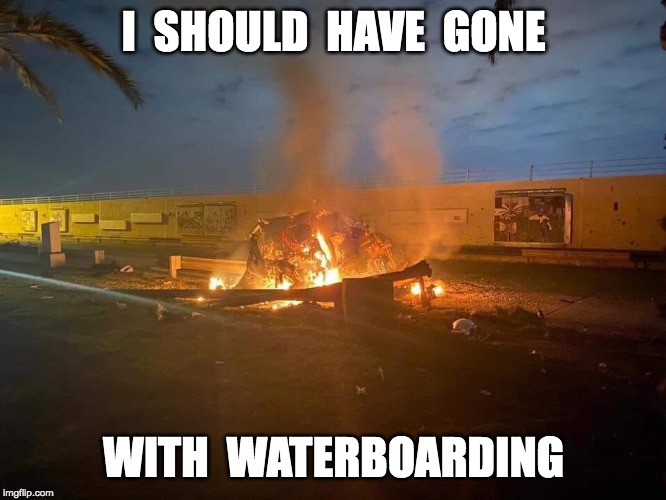 4 posted on 01/04/2020 12:22:43 PM PST by grey_whiskers (The opinions are solely those of the author and are subject to change with out notice.)
[ Post Reply | Private Reply | To 2 | View Replies]
To: AdmSmith; AnonymousConservative; Arthur Wildfire! March; Berosus; Bockscar; cardinal4; ColdOne; ...

What are their FR nicks?

The Jackass was a Soldier who left Iran and invaded Iraq to start some shirt at our embassy.

Let’s look at Obama and Hillary.

They hired a thug to murder the LEADER of Libya IN LIBYA by having a bayonet shoved up his behind so they could loot the Libyan treasuries.

What?…It was a late term abortion.

In her mind, Iran killed a contractor, an "ordinary" person.

President Trump killed a "revered" general, an elite like Pelosi.

To Pelosi, it was disproportionate for Trump to trade a contractor for a general, or an ordinary for an elite.

Pelosi, who is third in line to be President, believes that we should have targeted an Iranian grunt militiaman, not their second in command.

That's her definition of "disproportionate."

CNN, like Pelosi, must think that the death of a contractor is collateral damage, but the death of the general who sanctioned it is murder.

George Soros and his backers (countries and organizations hostile to The United States) must be amazed at how cheap they can buy the whores at CNN.

Some pretty funny pics/graphics on there

Maybe we should ask Soleimani if he would take the shot against American general. That being said he would be proud of Trump’s action.

Did they say Soleimani murdered the American citizen working in Iraq?

Did they mention the American citizen was assassinated by Soleimani?

How much is CNN being paid by Iran?

What about Malik Nidal Hasan? Why is that murderous POS still alive?

Any enemy of America that Trump takes down will be given hero status by CNN. That’s how deep in the tank they are for the Deep State! If Iran attacks us again they’ll probably be high fiving each other.

This isn’t the Cronkite days.

Trump sends his message to over 60 million people instantly and they discuss it with other people.

100s of millions reached in Seconds

The powers that be never though social media would help our side So Much.

And they hate it.

Yup - you are not alone in thinking this.

Trump broke the rules with the strike on Qasem Soleimani.

- He set a precedent that might end up making a member of the American ruling class a target of the Iranians and other terrorists.

The powerful and well-connected are NOT supposed to experience the pain of forever war.

Sure, it is, BUT .....the murdered one has committed murder upon American non-combatants in Benghazi, at our embassy. He devised various missions to be carried out, that were stopped. When a hhigh ranking general of a nation that openly supports international violence, openly threatens the head of state of another nation, that nation is then obligated to respond, and stop the threat. We did that.

The good news: Unless you’re bored at an airport, now one saw it.