Sheriff Joe Arpaio of Arizona is bound and determined to make sure we never forget the embarrassment of the birther movement. Most of us would love to put that ugly little racist blip in our history -- a time when conspiracy theorists and fools alike accused President Barack Obama of not being American. But Arpaio, a sheriff in Phoenix, Arizona, just won't give it up.

Can we say beating a dead horse, people? Sometimes it seems like certain politicians just do things to help out Stephen Colbert, Jon Stewart, and Bill Maher. After all, how else does anyone explain Arpaio's inane and insane assertion that Obama, a man who produced his birth certificate last year, isn't American?

"Forgery or fraud may have been committed," says Arpaio. Ooooh no! Are ghosts and goblins real, too, Sheriff Arpaio? How about the Loch Ness Monster? Do you go visit old Nessie on your days off from enforcing the laws of Arizona?

In all seriousness, this is vile racism plain and simple. In a place like Arizona, it's no surprise -- after all, many politicians there (including Arpaio) hold rather Draconian views on immigration -- and it's disgusting. And it's getting old fast.

For all you doubters for whom book learning was apparently a challenge, here are the facts: President Barack Obama was born in Honolulu on August 4, 1961. He has produced both a certificate of live birth during the 2008 campaign and the long-form certificate last year. Neither has been disproved.

So why is this still going on? Arpaio seems like a joke, but, according to Obama campaign spokesman Ben LaBolt, Republican Presidential hopeful Mitt Romney doesn't think so. Yesterday LaBolt tweeted:

Romney has called Arpaio for his endorsement, his aides called "weekly" and Arpaio was his honorary Chair in 08.

That's embarrassing. The fact is, most people agree Arpaio is a few cards shy of a full deck, but here we are still talking about him. Is this an alternate universe? Why am I guessing this guy is the type of person who stays at parties hours after they have ended asking for more chips and guacamole? Dude, the party is over, the ship has sailed, and you are beating a dead horse.

Sadly, there aren't enough cliched ways to say IT'S OVER to make it any clearer to this guy.

There was nothing natural about his birth. He was hatched!

They don’t write about the forged SS registration, nor the white elephant in the room the CT ssn. Wonder why?

ZOT is good, I suppose.

I can agree with you on the things you said in this post. I’m not so sure that Andrew would be a “right wing contra-birther” if he was alive today. And though we don’t know for sure why he died, it could be his willingness to change his mind on this issue - in conjunction with the video he has of Obama during college, which he says shows who Obama really is and what he is really about - is what ultimately ended up silencing him.

Andrew’s last interview was with Sheriff Joe Arpaio, in an advance interview regarding the posse’s findings the evening before he died. Andrew had commented in early February something along the lines of, “Wait until they see what happens on March 1st!” So he seemed to be aware of what the posse was going to find. Either that, or he was planning on coordinating the release of his own information on March 1st, when it was known the posse would be giving its report.

And somehow the posse was able to make contact with a government worker who has now signed an affidavit saying that he/she was personally at the home of Bill Ayers and heard Bill Ayers’ mother introduce Obama as a foreign student they were helping to get an American education. That sounds right up the same alley as the video Breitbart has. In fact, if the government worker was somebody who was supposed to investigate Ayers and his network of friends, the follow-up to the introduction to Obama might well have been to videotape this student that the Ayers family personally supported. So the same person that the posse got the affidavit from may be the same person who gave the video to Breitbart, and that person may have been the connector between the posse and Breitbart or Breitbart might have been the connector between that person and the posse.

It looks to me as if Breitbart may have figured out who Obama is and what he is about (specifically a foreign student who was assisted by Bill Ayers) and expressed a willingness to expose it AND showed a willingness to hear what Arpaio’s posse has.

I know that the media was threatened if they reported on this issue. It looks to me as if Breitbart may have resolved in his mind to take up this battle anyway. Now he’s dead, and we’ll probably never know for sure why he died. The fact that it happened just hours after he interviewed Sheriff Joe about a press conference where it was revealed that a government informant has sworn to hearing Mrs Ayers introduce Obama as a foreign student (which would most likely be revealed on the tape of Obama from college that Breitbart said he would release).... makes it appear very, very fishy, regardless.

the mandate was the docs presented for the state of Arizona

there is a reason and filming it was one of em 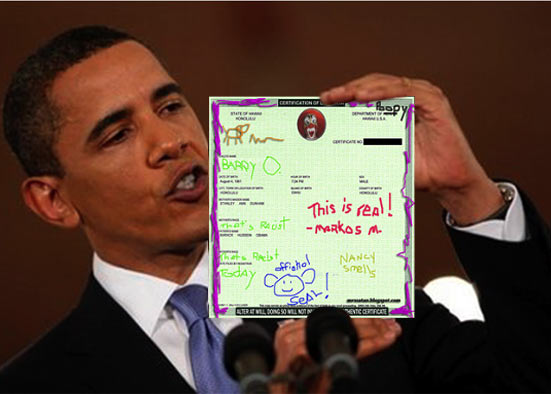 To be added or removed from the Viking Kitty/ZOT Ping List, FReepmail Darkwing104 or 50mm.

the left always try and make certain issues like this a joke and when one brings up certain facts the idiots you mentioned make fun of that person.
It’s a typical left wing tactic and you seem to be doing it too.

Well PC and making fun of folks who bring up issues and facts have become old, have become tedious and boring

Yes he’ll use the MSM his pals I might add and he’ll say look here it is and then make fun of those who ask for it but it will never be examined in court so ask yourself and the left wing sheep why not.

91 posted on 03/02/2012 10:18:45 AM PST by manc (Marriage is between one man and one woman,It's not a conservative view but a true American view)
[ Post Reply | Private Reply | To 1 | View Replies]
To: montag813
Alexander Hamilton himself was not a natural born citizen, and thus ineligible to be President. Is it "racist" to mention it?

Irrelevant, he was a Citizen at the time the Constitution was signed.

Begging your pardon, but isn't that exactly what this is about?

This is the typical leftists reply to anything that is true, but they don’t like. First, you use ridicule. Instead of disproving an idea, you make fun of it. Then you say it is wrong, but in your world it is wrong simply because you say so. Nothing you say really makes any sense, but sadly you seem to think so.
Since the birth certificate was released, numerous experts have said it was a fake. Besides the birth certificate, there are also many other unanswered questioned about President Obama’s background. He needs to answer these questions or not run again.

nail on head.
All we ever hear is that he has shown it bla bla bla,but they never ever face the questions which are posed to them and obama.

Left wing tactic, make fun of those who raise issues and call them names.

Let’s hijack it for the Undead Thread!

Weird, I know, right?
Shortbus here got himself the ultimate insult: Moved to CHAT!
http://www.freerepublic.com/tag/by:shortbus/index?tab=articles
Short Bus decided to troll first with a pro-homosexual marriage article, as he did in previous incarnations.
So join us on this thread to mock the troll in his moronic retreadness since we flipped the coin and it went *SPLAT*!

99 posted on 03/02/2012 10:28:57 AM PST by Darksheare (You will never defeat Bok Choy!)
[ Post Reply | Private Reply | To 1 | View Replies]
To: Short Bus; 50mm
Hey, Short Bus, or Sasha, or whoever you are, you are definitely short on brains. This 2nd grade level screed is worthless as anything I've ever read. You give absolutely no counter argument against what sheriff Arpaio has claimed; merely stupid, juvenile, useless, garbage. If you want to lay to rest the claims against Obama's birth certificate, then state facts and evidence than can be upheld in a court. Oh, that's right, you can't do that can you? Oops. My bad. Expecting something from you you're incapable of delivering.

So, on to the fun now that you're history around here...