VALLETTA, Malta (ChurchMilitant.com) - Organizers canceled the crucifix from the papal podium because Pope Francis did not want to offend illegal Muslim migrants during the climax of his Malta trip. 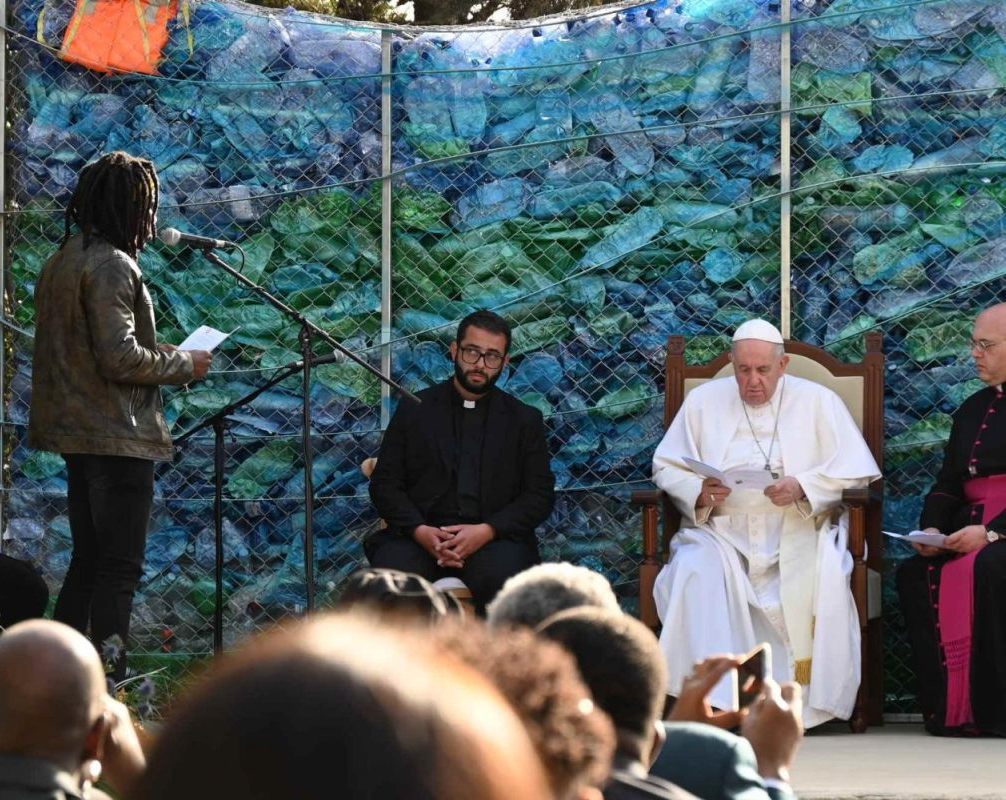 A migrant shares testimony at the John XXIII Peace Lab

Instead, recycled plastic bottles with red blobs were used to design the backdrop for the pope's address to migrants at the John XXIII Peace Lab in Ħal-Far on Saturday, a voluntary organization run by leftist Franciscan friar Fr. Dionysius Mintoff.

"When you look deeper, you will see that the sea is made of recycled plastic bottles, because there is more plastic than fish in our sea. And the red blobs are life jackets — the lives of people lost at sea," artistic director Carlo Schembri explained.

Schembri, who was commissioned to design the key backdrops for the papal visit to Malta, insisted he was being faithful to Francis' primary reason for visiting the island — to defend migrants and the ecology.

"The podium will not be adorned with a crucifix, given that the majority of migrants are Muslim," the Malta archdiocese noted,  in an article published on its website, adding that "the pontiff's visit is expected to draw attention to the brutal situation of Malta's migrant community."

Why is the pope ashamed of the Cross before Muslims, especially during Lent?

"The majority of the illegal immigrants trafficked to Malta on rickety boats leaving the Libyan coastline are not genuine refugees, but economic migrants — and are mainly Muslim young men aged between 18 and 28," Dr. Philip Beattie, president of Pro Malta Christiana, told Church Militant.

"Saint Paul preached 'Christ crucified — a stumbling block to Jews and foolishness to Gentiles' when he brought the gospel to Malta. The Apostle boasted in the scandal of the Cross. Why is the pope ashamed of the Cross before Muslims, especially during Lent?" asked Beattie, an economist at the University of Malta.

Francis said nothing about the anti-family onslaught unleashed by the LGBTQ+ lobby and their socialist allies during his address to Malta's president, George Vella. He also remained silent on Prime Minister Robert Abela's threat to discuss the introduction of euthanasia and extend "full reproductive rights" and "genetic screening" for unborn babies in the Labour 2022 electoral manifesto. Vella and Abela are both Catholic.

The "gifts" Malta has received with illegal immigration are the exploitation of ... African and Middle Eastern migrants as cheap labor on Malta's construction sites and in garbage collection, whilst a considerable number are imprisoned for violent crimes committed against Maltese citizens — robbery and drug trafficking offenses, among others.

However, priests who boycotted the papal visit in protest, fearing that the visit would be manipulated by Abela's recently elected socialist government, told Church Militant they were pleasantly surprised by the tone of Francis' addresses.

Continue to defend life from its beginning to its natural end.

"It is almost as if he has had a conversion after consecrating Russia to the Immaculate Heart of Mary," one priest said, noting how Francis had indeed railed against corruption in Malta.

Addressing a distinguished gathering at the presidential palace, the pontiff emphasized the "need to shore up the foundations of life in society, which rests on law and legality." He called on the president to "always cultivate legality and transparency, which will enable the eradication of corruption and criminality — neither of which acts openly and in broad daylight." 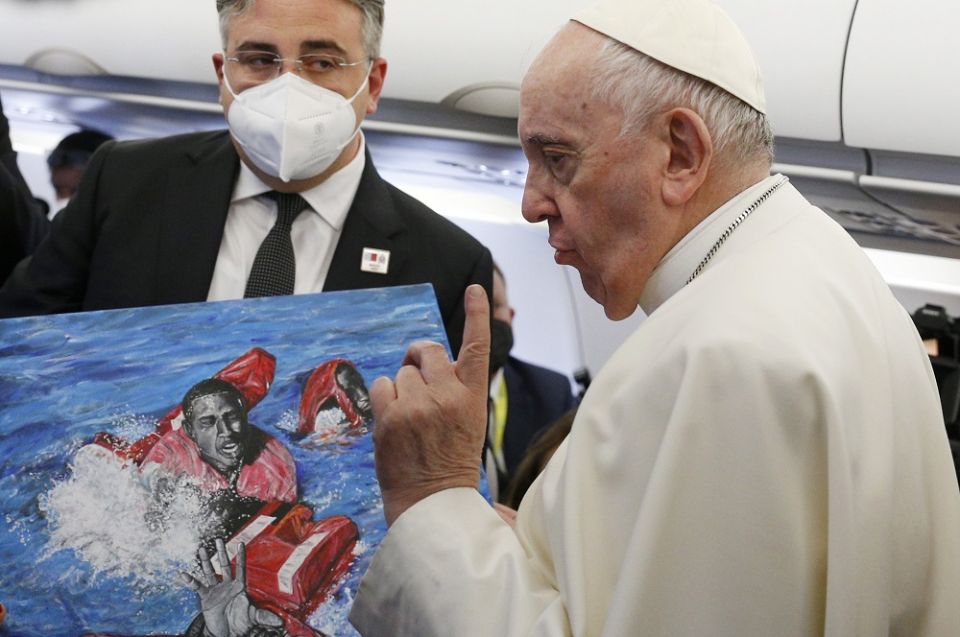 Francis points to a depiction of migration, on the papal plane

The pope also thundered against the "rapacious greed" of land speculators, saying their "avarice" risks "compromising not only the landscape, but the very future." The statement has been interpreted by many as a warning to Malta's archbishop Charles Scicluna — currently embroiled in a land-grab scandal, as Church Militant earlier reported.

Francis also blasted the "ideological colonization" of the current Western worldview "that goes against the right to life from the moment it is conceived."

Dovetailing the issue of abortion with concern for migrants, the pontiff preached:

I am aware of the commitment of the Maltese people to embracing and protecting life. Already in the Acts of the Apostles, the people of this island were known for saving many lives. I encourage you to continue to defend life from its beginning to its natural end — but also to protect it at every moment from being cast aside and deprived of care and concern.

However, faithful Catholics lamented that the pope did not mention the words "Jesus," "sin" or "repentance" during his address to the predominantly Catholic audience at the presidential palace.

It is almost as if he had a conversion after consecrating Russia.

Francis also sent a strong message to Russian oligarchs by not visiting the Sanctuary Basilica of the Assumption of Our Lady in Mosta, a shrine the pontiff himself raised to the status of a basilica, another priest told Church Militant. The Maltese hierarchy received 850,000 euros in August 2021 to floodlight the basilica, all from the sale of passport funds.

Amid Western sanctions, Russian oligarchs have been snapping up Maltese passports, which allow them unrestricted access to Europe. Russian citizens represent a quarter of all applicants for Malta's "golden passport" scheme, which allows high-income individuals to acquire a Maltese passport within one to three years. 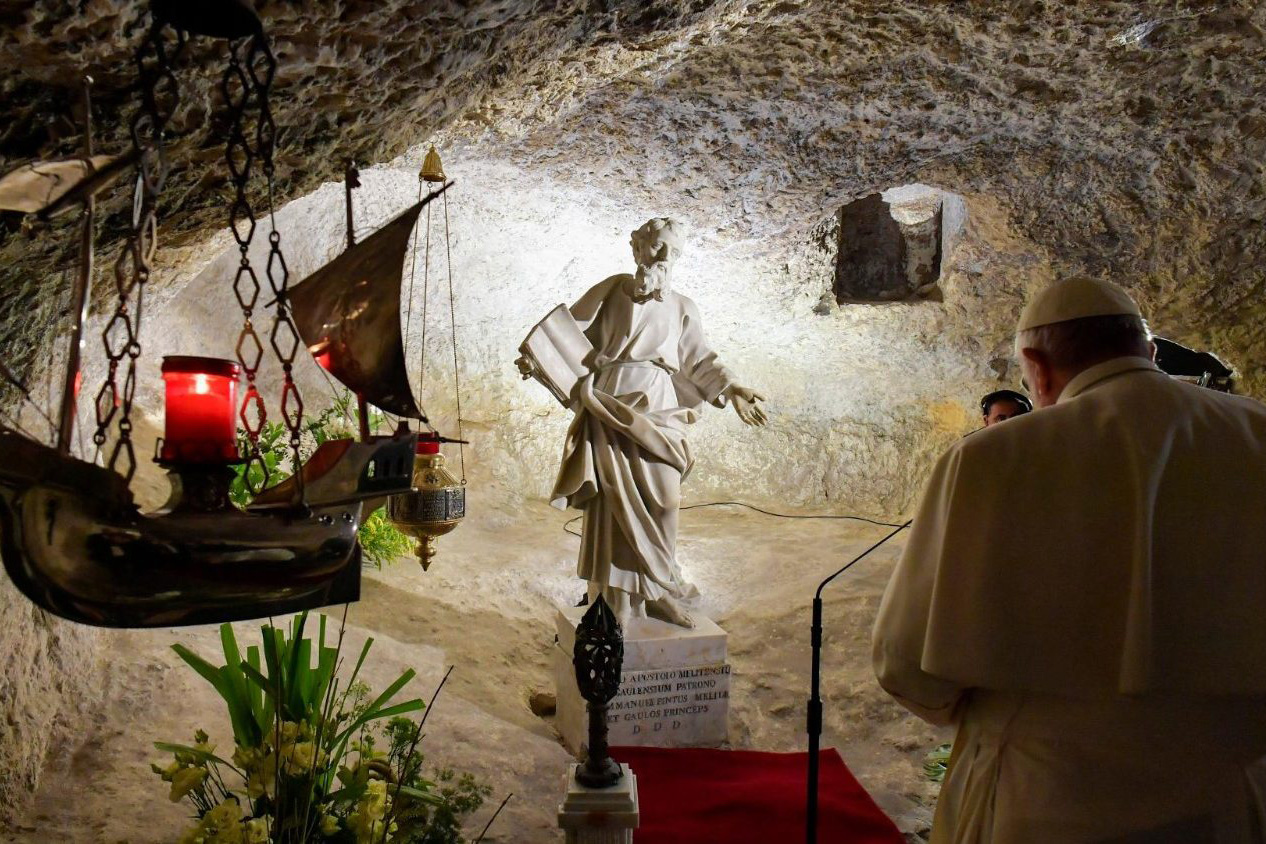 "That Malta is a corruption-ridden tax haven with a financialized economy that has driven waves of unbridled construction that has reduced the island to a mass of concrete, glass and aluminum is hardly a secret," Beattie lamented.

"Indeed, with last week's expected victory of Abela's socialists at the general elections, little will change," the economist noted. He added that "with this papal visit coming only seven days after the polls, many Maltese were left feeling that, despite the pope's comments, this visit has in some way 'canonized' the present Maltese governing regime."

Beattie said that the Vatican had "conveniently backtracked" on its "own self-declared policy that no papal visit was possible during a 15-day period prior to or after a country's political elections."

"The Labour Party has an unenviable track record in enacting the most liberal, anti-Christian legislation pushing so-called civil liberties over a relatively short space of time," Beattie remarked.

In February, after the papal visit was announced, Pro Malta Christiana ran a full-page paid advertisement in The Malta Independent, warning that "the dictatorship of relativism which threatens our country is moving Malta in a dangerous secularist and multicultural direction where objective truth will count for nothing."

"One can only speculate whether the present Vicar of Christ has really walked in the footsteps of the Apostle St. Paul during his sojourn in Malta," Beattie concluded.

Is that a second chin, or a tongue?

If my Pastor did something like this I would find another Church.

He doesn’t belong in stage with a crucifix anyway 🤪

If they just put up a bunch of pagan idolatry, like a golden calf, some pacamama nonsense, and other assorted bulldada, I’m sure sure Pope Feces would be fine with it.

No Catholic is under any obligation to follow anything this communist poser decrees. He’s a fake pope.

I remember a real pope… A Polish guy who actually fought communists and help the president and a Prime Minister bring down an evil empire.

They should offer to convert them to Christianity. If they refuse cast them back into the sea.

The forked one is the tongue.

The migrant photo looks like Obama trying to swim from Kenya. LOL

Yet ANOTHER reason to dislike this pope.

Was he at least able to put Pachamama on his podium??

What is wrong with him and the catholic church?

Fixed it to better reflect reality.

The two are not the same; don’t conflate them.

Was the cross Maltese?

Conservatives and traditionalists have been wary of Francis ever since he emerged on the loggia of St. Peter’s Basilica after his 2013 election without the red velvet cape of his predecessors. More recently, they have been alarmed by his takeover of the Knights of Malta sovereign religious order and the public sidelining of its conservative patron, Cardinal Raymond Burke.

Francis the Fraud, in lock step with the Anti-Christ.

Your pope is quite the guy.

But installed as the head of the Catholic church by the College of Cardinals.

Too bad you have to submit to him at the cost of your eternal salvation.