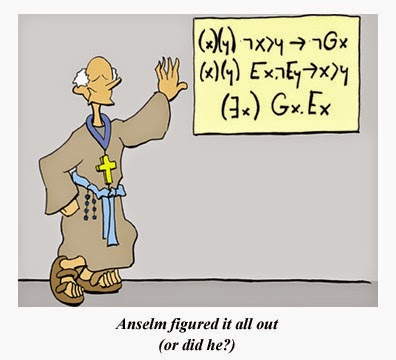 Brothers and Sisters: Peace be with you.

Frequently, Internet atheistic aces challenge me to provide evidence and/or proof for the existence of God. Almost all the time the proof they demand is, on its face, absurd because it is empirical in way or the other and God, if they only knew what the word "God" is, lies beyond any empirical proof. No matter, they keep insisting and the silence of the impossible experiment is proof enough for them.

This post is not address to those narrow, sterile minds because they've closed themselves within and become impermeable to any argument. Their minds already closed to reason present an insurmountable obstacle to sober argument. The only thing left to do for them is to pray.

Instead, this proof, proposed  by the mathematician Kurt Gödel (1906–1978), is a mathematical expression of the ontological proof proposed by St. Anselm of Canterbury (1033–1109) and should appeal to the open-minded and logic-bound. Now, St. Anselm's argument goes like this:

It is an argument that really bothers people and has been persistently attacked ever since, yet it keeps surfacing.

Gödel utilized modal logic and distinguished between necessary truths and contingent truths.It goes like this:
Axiom 4 assumes that it is possible to single out positive properties from among all properties. Gödel comments that "Positive means positive in the moral aesthetic sense (independently of the accidental structure of the world)... It may also mean pure attribution as opposed to privation (or containing privation)." (Gödel 1995). Axioms 1, 2 and 3 can be summarized by saying that positive properties form a principal ultrafilter.
From these axioms and definitions and a few other axioms from modal logic, the following theorems can be proved:
Symbolically, it looks like this:

This is my blurb understanding of this proof in English:


If you understood what is meant by "God" you will instantly understand that he cannot not exist; God; objective, concrete existence is a mandatory predicate of the being "God".

We need to be careful and hones regarding what this proof does and does not do. It would be intellectually dishonest to ascribe to Gödel's proof claims it doesn't make.


1. It does not prove the Triune nature of God as we Christians see Him;

2. It does not prove a Theistic (i.e. Christian, Jewish, or Islamic conceptions of God) conception of God; "God" can still be conceived in Deistic terms;

3. It makes no moral claims; it attaches no specific ethic or moral demands from God toward rational creatures.

4. It doesn't do away with panentheism ("'God' is in everything, but not everything is 'God'" type of belief)

5. It doesn't establish that the one God created the universe out of nothing.

What does Gödel's proof actually accomplishes?


1. It does away with theoretical atheism - the one embraced and screamed by today's "New Atheists".  Atheist is proved to be an abstraction and not an accurate description of objective reality; the affirmation "There is No God" becomes meaningless in the real world, but perhaps meaningful in fictitious or imaginary worlds, confined there along with unicorns and the Flying Spaghetti Monster..

2. It rules out polytheism - belief in many gods.

3. It rules out  pantheism.

Look, for reasons I explained above, Gödel's elaboration of St. Anselm's ontological proof will mollify Internet atheists. They will keep living as if God didn't exist, as dwarf versions of Nietzsche's supermen. They will live thus because that's what how they wish to live and admitting the existence of God would be inconvenient. They will go on demanding their empirical evidence without even bothering to understand why, when it comes to God, such evidence can't be had.

Of course, if they would bring themselves to understand what "God" is in the hierarchy of beings, they would understand why, and they would stumble open St. Anselm's and Gödel's proof and start the circle of affirmation and denial again, without bothering to think.

Now for us Christians, Gödel and St. Anselm created a threshold or vestibule to a temple inside which, in its sanctuary, we may find the one God and, in its Holy of Holies, we find God revealed in Jesus Christ.

The Holy of Holies is open for all of us. We must decide if we walk from the lobby into the sanctuary and then, into the Holy of Holies to meet Him in Person. He calls us to Himself, in fact. Will we heed His voice?

I think it might be possible to use this proof as a starting point for expressing St. Thomas Aquinas Five Arguments for the Existence of God, utilizing modal logic . However, that's beyond my capabilities for the moment. Perhaps some of you could do it?

Now, it is such a bizarrely improbable coincidence that anything so mind-bogglingly useful could have evolved purely by chance that some have chosen to see it as the final proof of the NON-existence of God. The argument goes something like this:

"I refuse to prove that I exist," says God, "for proof denies faith, and without faith I am nothing."

"But," says Man, "the Babel fish is a dead giveaway, isn't it? It could not have evolved by chance. It proves that You exist, and so therefore, by Your own arguments, You don't. QED"

"Oh dear," says God, "I hadn't thought of that," and promptly vanishes in a puff of logic.

"Oh, that was easy," says Man, and for an encore goes on to prove that black is white and gets himself killed on the next zebra crossing.

The Scriptures describes this effort in nearly the opposite manner...God decides to whom He will reveal Himself. The rest are crowded out (Rom. 9). Paul notices that the instant response will be, “This is unfair...” But, that is precisely God’s prerogative.

Well, the math certainly appears to be in order.

It’s just as dumb as it was originally.

I was going to say that. Thanks for saving me the time.

This is the one area of my compulsive life I do not need proof.

Obviously, this is not an argument from Scripture. In Scripture, the existence of God is a given and those who deny it are called “fools”.

That is all true, of course.

But before augmenting their natural reason with the power of faith, men need to be told *why* are they fools when they deny God. God’s grace operates even in that painstaking, very human process.

Like I’ve said, those who can’t or won’t think *hard* will keep demanding the proof they can’t have, in a circular loop, until they die. At that moment all will become clear.

I was never good at math I guess I’ll just take it on faith.

“Pascal's Wager” is an argument in apologetic philosophy. It posits that humans all bet with their lives either that God exists or not. Given the possibility that God actually does exist and assuming an infinite gain or loss associated with belief or unbelief in said God (as represented by an eternity in heaven or hell), a rational person should live as though God exists and seek to believe in God. If God does not actually exist, such a person will have only a finite loss (some pleasures, luxury, etc.). Pascal formulated the wager within a Christian framework. The wager was set out in section 233 of Pascal's posthumously published Pensées ("Thoughts").

1. God is, or God is not. Reason cannot decide between the two alternatives.
2. A Game is being played ... where heads or tails will turn up.
3. You must wager (it is not optional).
4. Let us weigh the gain and the loss in wagering that God is. Let us estimate these 2 chances. If you gain, you gain all; if you lose, you lose nothing.
5. Wager, then, without hesitation that He is. ... There is here an infinity of an infinitely happy life to gain, a chance of gain against a finite number of chances of loss, and what you stake is finite. And so our proposition is of infinite force, when there is the finite to stake in a game where there are equal risks of gain and of loss, and the infinite to gain.
6. But some cannot believe. They should then 'at least learn your inability to believe ...' and 'Endeavour then to convince' themselves.

Also described as … (I was exposed to this in a western civilization literature course in college in 1974. Makes me wonder if it is covered in college today.)

Kurt Godel is an absolute genius. Of course his best work was the “incompleteness theorem” of which he is most known for. He was Einsteins friend. They walked together everyday to and from home and Princeton. Kurt Godel also did some work on Einsteins relativity theorems.

Godel did not publish his paper on the ontological argument for the existence of God, because he was aware of the backlash that would occur during even those days of anyone in the scientific community that might even hint at the idea of a supernatural being, and not be a full materialist evolutionist. Einstein was a follower of the static universe theory until Hubble came along and proved Lematre to be correct. Excellent! I didn’t know all that! Thanks!