COVER: Yoda Is An Action Hero
in the latest STAR WARS Feature 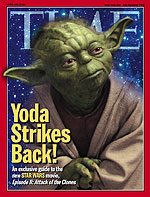 TIME Interview--GEORGE LUCAS:
'All democracies turn into dictatorships...That's the issue I've been exploring: how did the Republic turn into the Empire'

TIME's JESS CAGLE Was First Journalist To See the New Movie, Which Opens May 16

New York - Yoda is the real action hero of the newest "Star Wars" prequel opening May 16, reveals TIME's Jess Cagle - the first journalist to see the entire feature this past Thursday, at the side of creator George Lucas at Skywalker Ranch in Marin County, CA.

Now fully computer-animated, Yoda (who appears on TIME magazine's cover) is "no longer the endearing puppet animated by Frank Oz's hand" but is "both more supple and more thoughtful," Cagle reports. "Who'd have thought that our sedentary sage was such a deft martial artist, with lightsaber maneuvers...a Gandhi-turned-Rambo?"

In TIME's cover story, "Yoda Strikes Back!" An exclusive guide to the new STAR WARS movie, Episode II--Attack of the Clones" (on newsstands Mon., April 22), Cagle and critic Richard Corliss provide the most detailed view yet of the much-awaited fifth feature. Cagle talks to Lucas about how Anakin Skywalker becomes Darth Vader - and political analogies in the latest "Star Wars" installment (some scenes remind TIME of Kofi Annan and John McCain).

Lucas tells TME about his own geopolitics, reflected in the features:
"All democracies turn into dictatorships--but not by coup. The people give their democracy to a dictator, whether it's Julius Caesar or Napoleon or Adolf Hitler. Ultimately, the general population goes along with the idea. What kinds of things push people and institutions in this direction? That's the issue I've been exploring: how did the Republic turn into the Empire?...How does a good person go bad, and how does a democracy become a dictatorship?"

Lucas also opens up about how Anakin Skywalker becomes Darth Vader:
"Because he gets attached to things...He can't let go of his mother...his girlfriend...things. It makes you greedy. And when you're greedy, you are on the path to the dark side because you fear that you're going to lose things. You fear you're not going to have the power you need."

Lucas admits to TIME that his 1999 Star Wars movie, Episode I--The Phantom Menace, was not universally revered - though it made $431 million at the North American box office, making it the fourth highest-grossing movie of all time (after Titanic, the original Star TIME 'Star Wars' cover story/p. 2 of 2) Wars, and E.T. The Extra-Terrestrial.) "I'm getting my education now from the press," Lucas says. "They come in and say, 'Wow. People hated your movie. What do you think about that?"

"There's only one issue for a filmmaker," Lucas tells TIME. "Will this make it's money back so I can make the next one?" With Phantom Menace, Lucas admits he did not know: "It didn't have Harrison Ford, Mark Hamill, Carrie Fisher. It was not a slam dunk."

Lucas also talks with TIME about fatherhood ("My kids don't have a perfect life...they don't have a mother, and they just have to get over it"); making movies for 12-year-olds ("We had reached a period in terms of our society of not having a mythology, of not having a code that you pass down to the next generation"); demands of fans ("I can't really make a movie for fans"), and more.

Cagle and Corliss conclude Clones is "two hours of serious fun." By adding love scenes between stars Natalie Portman and Hayden Christensen, Cagle and Corliss conclude the hit new feature "looks like Shaquille O'Neal standing three feet from the basket." Clones extends the franchise "from 12-year-old boys (the action scenes) to 15-year-old girls (the love scenes). If it works, Lucas has quite a combo: the Star Wars and Titanic markets in one package."

? Interview: NATALIE PORTMAN:
When she's not playing Amidala, actress Natalie Portman has been going to college and keeping a low profile. "When I'm at a restaurant with my parents," Portman tells TIME, "I don't want to be stared at." Yet last week she wrote a letter to the Harvard Crimson objecting to a racially-charged essay about the Palestinian conflict that appeared in the paper; her family immigrated from Israel. Portman has completed her credits for a B.A. in psychology but may go back for another year of college before the summer of 2003, when the next Star Wars film goes into production.

? Interview: HAYDEN CHRISTENSON:
Actor Hayden Christenson, 21, whose role as Anakin Skywalker, Jedi knight-in-training, will make him world-famous, tells TIME "I think I'm a pretty grounded individual and will handle it as well as anyone my age would...Or maybe I'll become a big mess. Who knows?"

? Digital Yoda:
Once rubber, Yoda is now digital for Attack of the Clones. "We didn't want to make him look like he was real," Lucas tells TIME. The digital Yoda remains remarkably true to the delicate puppetry of Frank Oz, who still supplies the voice, TIME reports.

? FIRST ENTIRELY DIGITAL FEATURE 'FILM':
Clones is the first major feature to be shot and, in certain theatres, shown on digital disks. "The result," writes TIME's Richard Corliss, "is a breathtakingly clear image that lends a superreal glamour."

? 'Star Wars' Effect:
The series' huge success "forever altered the way Hollywood made movies and did business," according to TIME. Now, "films are made for kids, especially teen boys." Once, "movies were one-offs; there was no 'Gone With the Wind II." Now, "Studios swing for the fences to get a megahit action film that can win name-brand recognition and be profitably cloned for years to come."

The American system is not a democracy. It is a constitutional republic. A democracy, if you attach meaning to terms, is a system of unlimited majority rule; the classic example is ancient Athens. And the symbol of it is the fate of Socrates, who was put to death legally, because the majority didn't like what he was saying, although he had initiated no force and had violated no one's rights.

Democracy, in short, is a form of collectivism, which denies individual rights: the majority can do whatever it wants with no restrictions. In principle, the democratic government is all-powerful. Democracy is a totalitarian manifestation; it is not a form of freedom....

The American system is a constitutionally limited republic, restricted to the protectrion of individual rights. In such a system, majority rule is applicable only to lesser details, such as the selection of certain personnel. But the majority has no say over the basic principles governing the government. It has no power to ask for or gain the infringement of individual rights.

4 posted on 04/21/2002 7:56:16 AM PDT by snopercod
[ Post Reply | Private Reply | To 1 | View Replies]
To: Darth Sidious
This was the same guy that said Clinton was basically a well meaning individual facing "baseless accusations of corruption" from the eevil Trade Federation Republicans. Don't take this stuff too seriously. Am I worried about our civil liberties going down the drain? Yes, but I go to the movies to forget about stuff like that for a while.
5 posted on 04/21/2002 7:58:46 AM PDT by dr_who
[ Post Reply | Private Reply | To 1 | View Replies]
To: leadpenny
Four years ago it dawned on me that the Clone Wars were going to take their cue from World War I, in terms of how the desperation/devastation would lead the Germans to rally behind Adolf Hitler. Apparently that's holding up well, 'cuz the way things are shaping up Palpatine is going to become Emperor-for-life with a gleeful rubber-stamp of approval from the public.

(BTW, I'll be at Celebration II later next week with the rest of TheForce.net staff. Looking forward to meeting any fellow Freepers who can stop by :-)

I know as much about Lucas's political leanings as anyone else does, and that's precious little in all honesty. I didn't post about that, so much as to point out that this man "gets" this much, whereas most people we've elected do not.

8 posted on 04/21/2002 8:04:36 AM PDT by Darth Sidious
[ Post Reply | Private Reply | To 5 | View Replies]
To: dr_who
This was the same guy that said Clinton was basically a well meaning individual facing "baseless accusations of corruption" from the eevil Trade Federation Republicans.

Thanks for a reminder of a past irresponsible statement. Maybe he is having second thoughts.

When the leaders of a constitutional republic run the country by polling focus groups, it degrades into a democracy.

11 posted on 04/21/2002 8:06:30 AM PDT by E. Pluribus Unum
[ Post Reply | Private Reply | To 4 | View Replies]
To: snopercod
"The American system is a constitutionally limited republic, restricted to the protectrion of individual rights. In such a system, majority rule is applicable only to lesser details, such as the selection of certain personnel. But the majority has no say over the basic principles governing the government. It has no power to ask for or gain the infringement of individual rights"

That was the original idea...but so many words have been re-defined over the last two+ centuries that our Constitution retains little of its original intent. This change is, IMHO, the result of human nature, which always (eventually) responds to the siren call of socialism. It is unfortunate that mere humans inhabit the Supreme Court.

13 posted on 04/21/2002 8:09:59 AM PDT by bert
[ Post Reply | Private Reply | To 1 | View Replies]
To: tet68
Rome's Republic was an oligarchy. The Weimar Republic and the thing that passed for a democracy in Italy in the post-WWI period were the stirring of still youthful nation states trying to create something of a congeries of city states, landgraves, principalities, dukedoms, etc.

Generalizations are dangerous, and syllogistically speaking "all" is a dangerous position to take.

Except generally speaking, it is an observation that has held true 100% of the time over history.

Try as one might, there cannot be found any republic/democracy that has made it past, on average, two hundred years, and still maintained its principles. All of them deteriorated into either tyranny or stagnancy.

I couldn't have said it any better ! Even GW refers to us as a democracy !

"We" the people, even as hard as "we" try to cry we are not, are indeed responsible, by either action or inaction, for the ever increasing weight of the black boot of tyranny we feel on our necks.

A government must be strictly *LIMITED* to prevent it from becoming tyrannical, whether it's a democracy or a monarchy.

Something of which the Anti-Federalists had an intuitive grasp and the Federalists sought to appease.
19 posted on 04/21/2002 8:22:27 AM PDT by Maelstrom
[ Post Reply | Private Reply | To 1 | View Replies]
To: E. Pluribus Unum
"When the leaders of a constitutional republic run the country by polling focus groups, it degrades into a democracy."

Might also read When the electorate continues to elect and then look the other way When the leaders of a constitutional republic run the country by polling focus groups, it degrades into a democracy.