Democrats Have No One But Themselves, And Her, To Blame for The Ginsburg Vacancy
Townhall.com ^ | September 20, 2020 | Derek Hunter

The feces are going to hit the fan harder than it has at any point throughout the Trump administration. If you thought the Kavanaugh confirmation was a fight, you ain’t seen nuthin’ yet. If you weren’t excited about voting before…

The death of Supreme Court Justice Ruth Bader Ginsburg has given the election even more urgency than it had before. Yes, I realize that’s an understatement, but sometimes the simplest words are the best. Democrats have made no mystery of their plans should they ever obtain power again, and it’s not good for fans of individual liberty, personal responsibility, or just being left the hell alone by the government. That’s why Republicans need to move quickly and deliberately to replace her.

So much of the progressive agenda is dependent upon twisting the plain language of the Constitution into a rat’s nest of snarls and bastardizing words to the point of unrecognizability. The only thing standing between them and getting their way is the whims of John Roberts. How terrifying is that?

The passing of the Justice I affectionately called “Darth Vader Ginsburg” presents the republic with a fighting chance to move away from a nation ruled by the radical left and the politicking of Roberts, and back toward one where government power is held in check by the Constitution.

Still in shock, Democrats are scrambling to find a way to block any nomination. They don’t have one. They changed the rules under the Obama administration so they could stack liberals on the courts and their chickens have come home to roost. I say this with all due respect: to hell with them.

They’re whining about Merrick Garland and twisting the so-called “McConnell Rule” to try to make a case, but even Stevie Wonder could see they’d ram through anyone they wanted if the situation were reversed.

But the situation isn’t reversed. This is the bed Democrats made, make them lie in it. Make them bask in it, marinate in it, and smother them with the pillow if need be.

When the news of Darth’s death broke, the threats of violence started. Former CNN host Reza Aslan tweeted, “If they even TRY to replace RBG we burn the entire f*cking thing down.” And that was one of the less explicit, more reasoned responses to the death of an 87-year-old riddled with cancer who should’ve retired a decade ago. If liberals are mad, they should be mad at her.

Ginsburg shouldn’t have stayed on the court for so long. I’m not a fan of mandatory retirement, but there should come a point in everyone’s life when they want to spend more of the time they have left with family and friends than working, no matter what their job is.

But Ginsburg believed her own press, and the left built a cult around her. Books were written about her, documentaries made, and even a Hollywood production with models playing her and her late husband. She basked in all of it, embracing the cult and believing the hype. Leftists portrayed her as the most important Justice ever; as more important than the Constitution itself. And she acted accordingly.

When enough people, and news organizations, wonder aloud how the republic could survive without her, she clearly started to ask the same question. And she wasn’t willing to risk it.

Reports of her dying wish – that she not be replaced until after the election, in the hope of a Democrat being able to do it – showed who and what she really was. Threats of violence show who leftists really are. And that one Supreme Court Justice, any of them, should hold so much sway over the direction of the country shows how far we’ve fallen from the intent of our Founding Fathers.

Replacing RBG with that is the antithesis of her is the best hope for preserving our liberties and the very concept of limited government. That leftists like Aslan are greeting that prospect with “Over our dead bodies. Literally,” is a risk worth taking.

While the worst thing leftists have going for them is their totalitarian instincts boiling to the top for everyone to see, the best thing they have going for them is spineless Republicans who campaign as conservatives and govern like Democrats. By moving a nomination now, it’ll force a few jelly-spines to harden.

Ultimately, Democrats created this situation for themselves, they deserve a big dose of their own medicine.

Democrats were already talking about getting rid of the filibuster to ram through their bills, packing the courts to ensure whatever they pass is ruled legal, and creating new states to solidify power in the Senate, why the hell shouldn’t we take them at their word? When someone tells you who they are, believe them.

And if you believe them, there is little choice but to act preemptively to prevent their naked power grabs by quickly confirming a new Justice. You know they’d do the same.

Yep. RBG rolled the dice and lost. Was arrogant enough to think that Hillary would win in 2016 and could retire then.

PLEASE *ram through* YOUR choice for SCJ. Please destroy and defeat every attempt by the enemy to block a person of godliness and integrity to get the seat and change hearts to vote FOR her.

The heart of a king is as a river in Your hand and You turn it as YOU choose. Please turn many hearts to support President Trump’s choice for justice and let it happen BEFORE the election.

Protect all those involved in the process from the harm the left would love to inflict on them. Make their lies be exposed and not believed.

RGB was guided by her own deamons.
RGB believed she was more than a human being, that only she could determine who would replace her, and who the President would be.

If she did indeed dictate a death bed order, she died a broken human 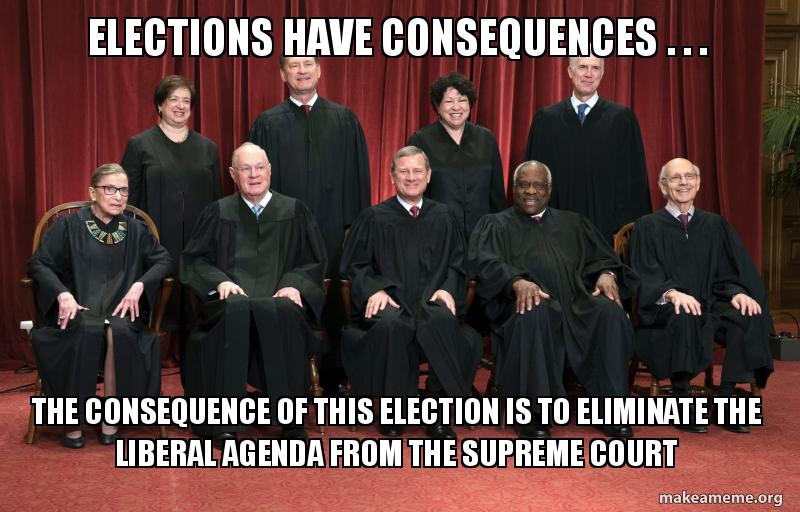 Many stories of RBG will come out...

I SAY NO MERCY! Lets get it done

Trump tweeted his thanks to Harry Reid handed the USSC to conservatives w/ the scheme to eliminate the 60-vote requirement for confirmation.

Would love to have been a fly on the wall when Harry was reassured by the Halfrican to take the necessary steps.

<><> Obama put the fix in for a permanent Democrat majority....
<><> Obama compiled a huge secret data base on Americans
<><> Hillary was a “shoo-in”
<><> Biden was being prepped to take over
<><> Biden was grooming his son Hunter for high office.
<><> even ol’ reliable Texas was turning blue.


WHAT COULD POSSIBLY GO WRONG?

RBG’s fault. She shouldn’t have died.

Indeed, read at some point said he wasn’t qualified to nominate her replacement.

Democrats indeed made this bed. In RBG’s case she refused to let go of a power she no longer needed.

She believed her own hype. Notorious my butt.

With Murkowski and Collins not likely to vote, do the Republicans have the votes needed to confirm?

I especially like that last suggestion. But alas, I don't think this crop of GOP appeasement geezers is up to the task.

“F” RBG and everyone that supported her, idolized her. All are the enemy.

Another Trump term could usher in TWO more constitutional jurist.

Then there will only be Fred Kagen Flintstone and Roberts remaining to prevent the complete extermination of the Rat party. It will be glorious.

At this point, Collins is saying the people didn't elect President Trump and therefore the next President should have the pick. As if his term has ended already....totally insane.

“...that she not be replaced until after the elections...”

That’s not what she reportedly said. She said, “My most fervent wish is that I will not be replaced until a NEW president is installed.”

In her boundless arrogance, Darth Vader Ginsburg could not concede the possibility that Trump will be reelected.

The selfishness of RBG is on full display. She wanted the first female president to appoint her replacement denying Obama that opportunity. She held out for Trump. Now the best She can hope for is a possibility of a total meh Joe Biden doing it.