Republicans are not keeping the campaign promise they made to voters in 2014 to halt President Obama’s “fundamental transformation of America,” conservative and Tea Party leaders charged in an open letter to Congress on Monday.

On April 28, Senate Majority Leader Mitch McConnell (R-KY) cited fast-track trade legislation and a bill requiring congressional review of the administration’s nuclear deal with Iran as the major accomplishments of the GOP-led 114th Congress so far.

Earlier that month, Obama praised what he called “some outbreaks of bipartisanship and common sense in Congress” over Iran and trade. The president also said he was holding bipartisan talks with the Republican leadership on transportation infrastructure issues as well.

“To the extent the majority leader and the president are making nice, I’m happy. We need a lot more consensus in the federal government. There’s partisanship at every turn,” Sen. Roger Wicker (R-MS) said Monday.

But the 50 conservative leaders who signed the Citizens’ Mandate in January reminded McConnell and the rest of the Republican leadership that voters who gave them a landslide victory last November have much higher expectations for them, such as ending executive branch overreach and restoring the constitutional balance of power. … 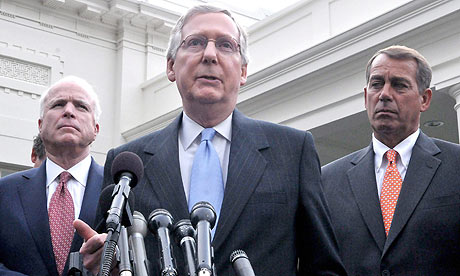 The EXEMPT undocumented Democrats:
"But We did keep our promise to our Moslem Caliph, lord-protector
that we would continue to attack American conservatives and Tea Party
using the IRS, while protecting our Moslem lord-protector
on his Benghazi-, open border-, Arab Spring-, and "rebel"-projects."

I do. In fact, I won't forget that nonsense. No GOP votes from me, other than Cruz. Far as I'm concerned, the GOP leadership, and the vast majority of the GOP elected, can go straight to hell. I'll vote Cruz in the primaries, and hopefully I'll be able to vote Cruz in the generals. Otherwise, straight 3rd party for me! I can't quite bring myself to just stay home, so 3rd party it is.

John Boehner: ‘We’re ready to be led’ on taxes

Yes I can unequivocally say I blame the GOP for not stopping the takeover. Not even slowing it down.

The 2009 demonstration (9/12 project), the elections since 2010 - how many of them now? -, waves and waves of ‘tea party’ candidates turned DC insider politicians,

NOTHINGS CHANGED. Obama gets to do as he pleases, GOP did diddly squat, except making noises about maybe they're thinking of doing something. No wonder PEOPLE are so disgusted.

Many in government are not only incompetent they are also worthless cowards. They are a disgrace not only to America but to the human race.

Gee, it’s almost like these SOB’s are not only perfectly fine with all that, but as in the case of Romney, are actually IN on it, and for it.

Only a major Revolution will fix it.

Capture one or both of the political parties in the United States.

We know the communists control the Democrat Party.

What people have a hard time believing is that they have captured both parties, which is becoming painfully obvious.

We will be prevented from nominating anyone who would stop the invasion/cheap labor importation/colonization.

we're getting all these awful somalians being loaded here like animals....

Romney would have been better, much better....

Nobody switched to voting for Obama away from Romney, the latter of whom could not get the independents.

34 posted on 05/19/2015 6:07:51 PM PDT by Olog-hai
[ Post Reply | Private Reply | To 32 | View Replies]
To: mulligan
the only explanation that would make sense if that those Clintonian FBI files and the total takeover of federal agencies by obamists eg the IRS, the FBI, the DOJ, the CIA...etc have really taken hold of pubs by the balls....

I have to believe that or else I'm left with the idea that the pubs at least some of them just want all this stuff to happen anyway....

to which I say....McCain OR Romney would have been better, far, far better and everybody knows it in their hearts...

I have always stood with Republicans, defended the defenseless, made excuses and gave them the benefit of doubt. After the November BS, they can go to hell, because that is what they deserve.

That’s only because Obama is exceptionally far left.

Rand Paul On Shutdown: "Even Though It Appeared I Was Participating In It, It Was A Dumb Idea"

I said throughout the whole battle that shutting down the government was a dumb idea. Even though it did appear as if I was participating in it, I said it was a dumb idea. And the reason I voted for it, though, is that it's a conundrum. Here's the conundrum. We have a $17 trillion debt and people at home tell me you can't give the president a blank check. We just can't keep raising the debt ceiling without conditions. So unconditionally raising the debt ceiling, nobody at home wants me to vote for that and I can't vote for that. But the conundrum is if I don't we do approach these deadlines. So there is an impasse. In 2011, though, we had this impasse and the president did negotiate. We got the sequester. If we were to extend the sequester from discretionary spending to all the entitlements we would actually fix our problem within a few years.

...by softening its edge on some volatile social issues and altering its image as the party always seemingly "eager to go to war... We do need to expand the party and grow the party and that does mean that we don't always all agree on every issue" ... the party needs to become more welcoming to individuals who disagree with basic Republican doctrine on emotional social issues such as gay marriage... "We're going to have to be a little hands off on some of these issues ... and get people into the party," Paul said.

Latinos, should be a natural constituency for the party, Paul argued, but "Republicans have pushed them away with harsh rhetoric over immigration." ...he would create a bipartisan panel to determine how many visas should be granted for workers already in the United States and those who might follow... [and the buried lead] "Imagine 12 million people who are already here coming out of the shadows to become new taxpayers...