An aerial picture of traces of earthworks built by a lost Amazonian civilisation dating to 200AD. Photograph: National Geographic

It is the legend that drew legions of explorers and adventurers to their deaths: an ancient empire of citadels and treasure hidden deep in the Amazon jungle.

Spanish conquistadores ventured into the rainforest seeking fortune, followed over the centuries by others convinced they would find a lost civilisation to rival the Aztecs and Incas.

Some seekers called it El Dorado, others the City of Z. But the jungle swallowed them and nothing was found, prompting the rest of the world to call it a myth. The Amazon was too inhospitable, said 20th century scholars, to permit large human settlements.

Now, however, the doomed dreamers have been proved right: there was a great civilisation. New satellite imagery and fly-overs have revealed more than 200 huge geometric earthworks carved in the upper Amazon basin near Brazil's border with Bolivia.

Spanning 155 miles, the circles, squares and other geometric shapes form a network of avenues, ditches and enclosures built long before Christopher Columbus set foot in the new world. Some date to as early as 200 AD, others to 1283.

Interesting....I’ve heard that many of the Indian tribes in the southeastern part of North America are descended from the Ohio/Mississippi River mound building civilization that returned to nomadism. Could the tribes of the Amazon be descendents of a similar culture that also collapsed, for whatever reason? Reference to the book by Charles C. Mann? Excellent read. 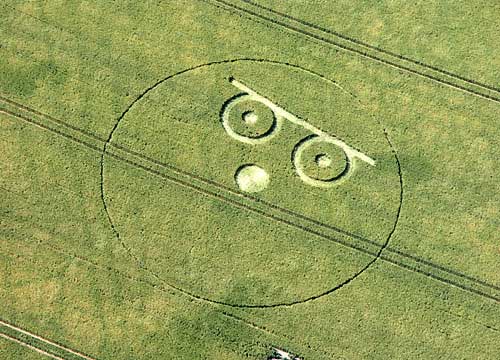 Another testement that the Book of Mormon was not written by Joseph Smith and that events are true. One of the few places in the text that people point to as proof that it was written later, just disappeared.

Archeologists and anthropologists have determined the Pawnee had a sophisticated understanding of the movement of stars, so that they noted the nonconforming movements of both Venus (Evening Star) and Mars (Morning Star). The Pawnee centered all aspects of daily life on this celestial observation, including the important cultivation cycle for sacred corn.

They built earthwork lodges to accommodate the sedentary nature of Pawnee culture; each lodge "was at the same time the universe and also the womb of a woman, and the household activities represented her reproductive powers."[1] The lodge also represented the universe in a more practical way. The physical construction of the house required setting up four posts to represent the four cardinal directions, “aligned almost exactly with the north-south, east-west axis.[2] Along with the presence of the posts, four other requirements marked the Pawnee lodge as an observatory:

The Morning Star ceremony was a ritual sacrifice of a young girl in the spring. This is very similar to one that the Aztec performed.

On the final day of the ceremony, a procession of men, boys and even infants accompanied the girl outside the village to where the men had raised a scaffold. They had used sacred woods and skins, and the scaffold represented “Evening Star’s garden in the west, the source of all animal and plant life.”[8] The priests removed her clothing and

The procession was timed so that she would be left alone on the scaffold at the moment the morning star rose. When the morning star appeared, two men came from the east with flaming brands and touched her lightly in the arm pits and groins. Four other men then touched her with war clubs. The man who had captured her then ran forward with the bow from the Skull bundle and a sacred arrow and shot her through the heart while another man struck her on the head with the war club from the Morning Star bundle. The officiating priest then opened her breast with a flint knife and smeared his face with the blood while her captor caught the falling blood on dried meat. All the male members of the tribe then pressed forward and shot arrows into the body. They then circled the scaffold four times and dispersed.[9]

The Pawnee practiced the Morning Star ritual regularly through the 1810s. The Missouri Gazette reported a sacrifice in 1818. US Indian agents sought to convince chiefs to suppress the ritual, and major leaders, such as Knife Chief, worked to change the practices objected to by the increasing number of American settlers on the Plains. The last sacrifice was of Haxti, a 14 year old Oglala girl on April 22, 1838

Human sacrifices were rare among the North American Indians. The practice is known to have existed among the Natchez, who lived in the present state of Mississippi, and possibly in Arizona and New Mexico. In Mexico, on the other hand, the idea was highly developed, and under the Aztec rule large num- bers of victims were immolated every year. It may be significant that several of the practices and concepts connected with the Pawnee sacrifice find Mexican para- llels. Early Aztec manuscripts show victims fastened to scaffolds like that used by the Pawnee and shot to death with arrows. In both places the body of the vic- tim was cut open, and the blood offered. The idea that the sacrifice was more acceptable if the victim mounted the scaffold willingly was .common to both, together with the still more striking idea that the victim was a personification of a deity. Among the Aztecs this con- cept reached its highest development, the victim in at least one ceremony being treated as a god for a year before his sacrifice. Finally, in both places there seem to have been astronomical beliefs connected with the
sacrifices.

This account has been compiled from the unpublished notes of Dr. G. A. Dorsey and from articles by
several other authors.

The Sacrifice to the Morning Star
by the Skidi Pawnee

Yes, the book. Many interesting ideas there, certainly fodder to refute the pablum that the left feeds in the public schools (anti-American whining)

I got the book from Bartman, loaned it to Nailbiter

Thanks to Blam for the ping