Dec. 28 - Feast of The Holy Innocents
Women for Faith and Families ^

The Feast of the Holy Innocents

113. Since the sixth century, on 28 December, the Church has celebrated the memory of those children killed because of Herod's rage against Christ (cf. Mt 2, 16-17). Liturgical tradition refers to them as the "Holy Innocents" and regards them as martyrs. Throughout the centuries Christian art, poetry and popular piety have enfolded the memory of the "tender flock of lambs"(125) with sentiments of tenderness and sympathy. These sentiments are also accompanied by a note of indignation against the violence with which they were taken from their mothers' arms and killed.

In our own times, children suffer innumerable forms of violence which threaten their lives, dignity and right to education. On this day, it is appropriate to recall the vast host of children not yet born who have been killed under the cover of laws permitting abortion, which is an abominable crime. Mindful of these specific problems, popular piety in many places has inspired acts of worship as well as displays of charity which provide assistance to pregnant mothers, encourage adoption and the promotion of the education of children.


As recorded in the gospel of Matthew (below), after the visit of the Magi, Herod, in rage and jealousy, slaughtered all the baby boys in Bethlehem and surrounding countryside in an attempt to destroy his perceived rival, the infant Messiah. These "innocents" are honored by the Church as martyrs.


This beautiful English lullaby carol originated in the Coventry Corpus Christi Mystery Plays performed in the 15th century. In a play called The Pageant of the Shearmen and Tailors, the women of Bethlehem sing this song just before Herod's soldiers come to slaughter their children. It tells the story of the murder of the Holy Innocents, and is sung on December 28, the feast of those tiny martyrs.

O sisters, too, how may we do,
For to preserve this day;
This poor Youngling for whom we sing
Bye, bye lully, lullay

Herod the King, in his raging,
Charged he hath this day;
His men of might, in his own sight,
All young children to slay.

Then woe is me, poor child, for thee,
And ever mourn and say;
For thy parting neither say nor sing,
Bye, bye lully, lullay.

Collect for the Feast of the Holy Innocents

O God, whose praise the martyred innocents did this day proclaim, not by speaking, but by dying: Destroy in us all the malice of sinfulness, that our lives may also proclaim thy faith, which our tongues profess. Through our Lord. Amen.

she refused to be consoled because they were no more.

Iit was three days after his first birthday. Little Mark Van Sickle was so badly abused that doctors knew he probably wouldn't survive.

How truly tragic! I will remember this innocent soul in my prayers today. 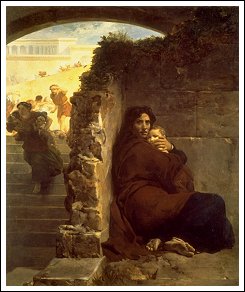 Check back tomorrow and see the updated numbers -- it's heartbreaking.

I'm just curious,are there any historical sources that you know of outside the Bible, that would substantiate the claim that the slaughter of the firstborn actually took place?

According to the Catholic Encyclopedia ....

The Greek Liturgy asserts that Herod killed 14,000 boys (ton hagion id chiliadon Nepion), the Syrians speak of 64,000, many medieval authors of 144,000, according to Apoc., xiv, 3. Modern writers reduce the number considerably, since Bethlehem was a rather small town. Knabenbauer brings it down to fifteen or twenty (Evang. S. Matt., I, 104), Bisping to ten or twelve (Evang. S. Matt.), Kellner to about six (Christus and seine Apostel, Freiburg, 1908); cf. "Anzeiger kath. Geistlichk. Deutschl.", 15 Febr., 1909, p. 32. This cruel deed of Herod is not mentioned by the Jewish historian Flavius Josephus, although he relates quite a number of atrocities committed by the king during the last years of his reign. The number of these children was so small that this crime appeared insignificant amongst the other misdeeds of Herod. Macrobius (Saturn., IV, xiv, de Augusto et jocis ejus) relates that when Augustus heard that amongst the boys of two years and under Herod's own son also had been massacred, he said: "It is better to be Herod's hog [ous], than his son [houios]," alluding to the Jewish law of not eating, and consequently not killing, swine. The Middle Ages gave faith to this story; Abelard inserted it in his hymn for the feast of Holy Innocents:

But this "infant" mentioned by Macrobius, is Antipater, the adult son of Herod, who, by command of the dying king was decapitated for having conspired against the life of his father.
18 posted on 12/28/2002 2:06:31 PM PST by NYer
[ Post Reply | Private Reply | To 14 | View Replies]
To: Siobhan
Truly moving image .... I can't begin to imagine the immense pain suffered by these mothers as they watched their innocent sons put to death by the sword. Wailing is surely an understatement.

Good to see you back in the forum, Siobhan. My prayers for you and your family each day. Welcome back. Know that you are among friends.