As we approach 2022, many are wondering what the year ahead may bring.

While we can't read too much into numerology, the number 22 associated with this year is a very significant prophetic number, carrying multiple layers of biblical meanings.

22 - Number of Completion and Fullness

The Hebrew alphabet consists of 22 letters - from the first letter Aleph to the final letter Tav. The Hebrew Bible features many 'acrostic' passages, which are passages using all22 letters of the alphabet in sequence, with each successive letter starting a new line. From a Hebraic mindset, passages that use the entire Hebrew alphabet in this way speak of perfection, fullness and completeness.

Here are some examples of acrostic passages in the Bible: 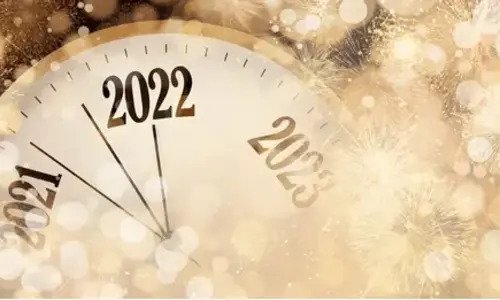 FReemail me if you wish to be added to or removed from The End Times Ping.

2022 is right around the corner and there are fires everywhere you look. The world is in chaos. Will you be ready when Jesus calls?

Matthew 24:33
So you also, when you see all these things, know that it is near—at the doors!

Look, the Hebrews got the big one wrong in year “0” despite have many, many clues over time, so.....

All interesting, as long as we remember the beginning o the article, “While we can’t read too much into numerology....”

Why pick the number 22? Because it’s 2022 AD. But plenty of scholars, even serious Christian scholars, say the birth of Jesus may have been in 3 or 4 BC. So the year dedicated as 2022 may have no religious significance at all. So we may not be reading too much into this numerology exercise, but we are reading a lot into it.

Agreed. If any number is going to be used, it won’t be our calendar year. It will be the Hebrew calendar year - 5782.

It was always my understanding that numerology of ANY kind was considered "divination" by God, and thus was strictly forbidden by God.

Many fans and/or practitioners of "Bible code"-type stuff, however, say "But what WE do is DIFFERENT!". Of course they would. Not sure I'm convinced, though.

Joseph learned how to uni-code.

Except there was never a "Year 0."

The Gregorian calendar was created by 6th Century monk called Dionysius Exiguus, AKA "Denis the Short," who used Biblical references to fix the date of the birth of Jesus and created his new calendar, which was first implemented by Pope Gregory XIII in 1582, hence the name "Gregorian calendar."

Except Dennis the Short died in 544 AD, a good six or seven centuries before the full Arabic numeral system (which was actually Indian in its origin) reached Europe. Before that, there was no numeral zero (or other representation of a null number) in Europe. So Dennis couldn't have had the Gregorian calendar (which we still use today) start in the year 0, even if he'd wanted to, because he didn't have the zero.

Which also necessarily means that all of you who celebrated the turn of the new Century on New Years Eve of 1999 were 366 days early. The 21st Century actually began on January 1, 2001.

Because there was NO YEAR 0.

And Dennis also got the Year 1 wrong because archaeology since has proved that Herod was dead by no later than 4 BC.

Or, did you intentionally miss my point just to show us how smart you are?

How about the name Adam, whose 3 Hebrew letters stand for Adam, David, and Messiah?

David is midway between Adam and Messiah. Adam was Hebrew year 1, David became king around Hebrew year 2891 midway to Messiah, who should appear in Hebrew year 5782. This year.

Is anyone really listening? I meet with a groups of senior ladies once a week for early supper. When the topic comes up, it immediately changes to something else. These are all church going ladies.

Well you, me, and about a handful of others are paying attention. The rest can worry about more important matters I suppose?

Like their next hair or nails appointment or those “New Year Resolutions”?

The road is narrow!