For all you end times lovers of bible prophecy, what is happening right now on the ground in Iraq, in Ur of the Chaldees, is a stunning fulfillment of 2,000 year old words spoken by the prophets and apostles for us who are alive right now in these last days. If you were waiting for “something to start”, you’re about a year too late, it’s not only begun but for us who are saved, will soon be over. Flight #777 beckons, is your seat book for the coming trip to the clouds? Now let’s get the update on Chrislam in Iraq with the False Prophet Jorge Bergoglio.

“For this we say unto you by the word of the Lord, that we which are alive and remain unto the coming of the Lord shall not prevent them which are asleep. For the Lord himself shall descend from heaven with a shout, with the voice of the archangel, and with the trump of God: and the dead in Christ shall rise first: Then we which are alive and remain shall be caught up together with them in the clouds, to meet the Lord in the air: and so shall we ever be with the Lord. Wherefore comfort one another with these words.” 1 Thessalonians 4:15-18 (KJB)

Pope Francis swaggered off the jet this morning, receiving a conquering hero’s welcome in Iraq for his visit to the birthplace of Abraham, Ur of the Chaldees. And no, that was not metaphor or hyperbole, the Roman pontiff today claimed Iraq for the Vatican, and is there to take the mantle of Abraham as the centerpiece of his Chrislam One World Religion he officially started in February of 2019 back in Abu Dhabi. We strongly urge you to refresh your memory by clicking on the disgusting image below of the False Prophet kissing Sheikh Ahmed al-Tayeb on the mouth sealing the Chrislam covenant.

Dispensationally speaking, yes, we are still in the Church Age, such as it is, and yes, we will be removed before the start of the time of Jacob’s trouble. All that remains true and the end times timeline is still on track. But listen to me now, and I pray you listen well. What is happening in Iraq right now, at this very moment, is another giant step in the creation of the One World Religion of Chrislam warned about in Revelation. We are so close that time period that the set-up is right now underway as our dispensation of the Church Age is literally overlapping with the formation of the time of Jacob’s trouble.

“Because ye have said, We have made a covenant with death, and with hell are we at agreement; when the overflowing scourge shall pass through, it shall not come unto us: for we have made lies our refuge, and under falsehood have we hid ourselves: Therefore thus saith the Lord GOD, Behold, I lay in Zion for a foundation a stone, a tried stone, a precious corner stone, a sure foundation: he that believeth shall not make haste.” Isaiah 28:15,16 (KJB)

The Timeline Of The Vatican And Pope Francis In Creating Chrislam Known As The Abrahamic Faiths Initiative Last August, when the release of the Abraham Accord from President Trump and Jared Kushner, I did an article showing you the whole Chrislam timeline that brought everything to a head. Please click on the link below and read all of it, and when you’re done, and you look at what is happening right now in Iraq, you will see that prophecy is literally leaping off the pages of your King James Bible and onto today’s headlines.

RECOUNTING THE HISTORY OF IRAQ – “THE BIRTHPLACE OF ABRAHAM, FATHER OF MANY IN FAITH,” THE STATEMENT HIGHLIGHTS THAT IS A BEAUTIFUL COUNTRY OF RICH CULTURAL AND RELIGIOUS DIVERSITY WITHIN WHICH MANY ETHNIC AND FAITH COMMUNITIES HAVE LIVED SIDE BY SIDE FOR MANY CENTURIES. HOWEVER, RECENT DECADES HAVE BEEN MARKED BY WAR, INSECURITY AND THE RISE OF THE SO-CALLED ISLAMIC STATE (ISIS) WHICH HAVE “DEEPLY STRAINED RELATIONS BETWEEN COMMUNITIES AND DAMAGED THE COUNTRY’S SOCIAL FABRIC.”

Still yet today, “Iraq still faces daunting challenges,” said the organizations. “Among the 1.2 million Iraqis who continue to be internally displaced and approximately 4.8 million returnees, many are in dire need of help.” All these, coupled with a worsening economic crisis, further exacerbated by the ongoing Covid-19 pandemic, is “pushing many into poverty and depriving the government of resources need to assist its own people.”

Pope Francis’ message of universal fraternity The joint statement recalls that in the Holy Father’s latest Encyclical, Fratelli tutti, he writes that religions have a role to play at the service of fraternity in the world. In the same vein, the Abu Dhabi Document on Human Fraternity underscores that “faith leads a believer to see in the other a brother or sister to be supported and loved” and believers are called to express fraternity through safeguarding creation and supporting all people, especially the poorest and those most in need.

Inspired by these, the organizations express their support for the “message of fraternity and dialogue that Pope Francis is bringing to Iraq” adding, that they believe “it represents a necessary way forward to heal past wounds and build a future for the country’s diverse communities” as they continue to collaborate with authorities to help communities “reconcile, rebuild peace, and reclaim their collective rights to safety, services and livelihoods.”

At the same time, the organizations reiterated their commitment to continue to serve and empower people without discrimination on the basis of their needs, and respect others’ cultural values and religious convictions while rejecting all forms of sectarianism and proselytism, strengthen. They also promised to strengthen inclusive initiatives and approaches that foster social cohesion, as well as intensify collaboration between themselves in the service of those in need.

Finally, the faith-based organizations urged the international community to “remain engaged in supporting the Iraqi people to overcome their current challenges, in a true spirit of human fraternity and solidarity.”

PM me if you wish to be added to or removed from The End Times Ping List.

The Roman church claims to be the One True Church, 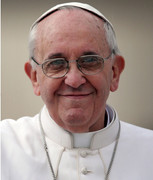 Why do the Bishops let him remain. He is a false pope creating his own religion...and not representing the Catholics around the world.

I fail to see the connection of Chrislam with the Abraham accords.

I thought the Abraham accords was a peace agreement that Trump orchestrated between Israel and neighboring countries.

Where did Chrislam come into that?

The pope is a stranger to the God of Israel and to scripture.

The big indicator of the last days is the peace treaty and the building of the Jerusalem temple.

A talking mule is running the Catholic ORG.

On its way - not there yet but it will happen

Pope washes feet of Muslim refugees, says ‘We are brothers’

Not being a Catholic I really respected the previous Pope. I would watch Easter and Christmas services at the Vatican. Stopped when this one took over. There is something so dark and evil about him. In the Protestant religion we have our share, but he is influencing our belief system worldwide. It looks like Revelation coming to life

“Why do the Bishops let him remain. He is a false pope creating his own religion...and not representing the Catholics around the world.”

He is appointing bishops/cardinals who will choose the next pope. Things are moving in the direction as described by others on this thread.

The only answer is because they are part of it.

Francis would be most closely associated with the False Prophet. The “religious” leader that demands worship of the Beast, the Antichrist (Nicolae).

They used a pretty good actor in “Megiddo: Omega Code 2” for that role (False Prophet). Definitely had that creepy feeling.

He’s @ 2:08 (dressed in black; played by Udo Kier) next to the Antichrist in uniform with red pants (played by Michael York).