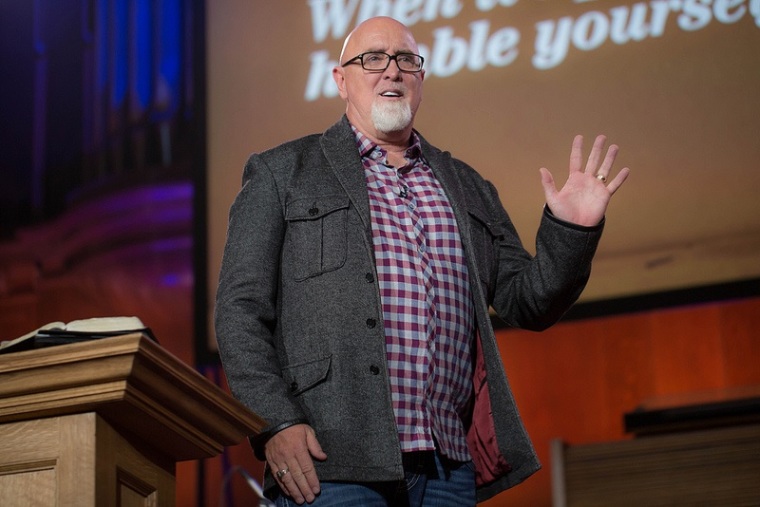 More than a month after winning a lucrative arbitration settlement against Harvest Bible Chapel in the greater Chicago area, founder James MacDonald has alleged elders colluded to oust him from the helm of the church in an unbiblical manner following a failed attempt at reconciliation.

“Some are no doubt saying, ‘Dude, you got fired. It happens, even unjustly, all the time – own what you can, get over the rest and get on with your life,” he explained in a recent two part statement (part 1 and part 2) posted on his website.

“I agree! And I surely would have, were it not for the false and destructive financial accusations against me, voiced by Tim Stoner to HBC congregation and online for 10 months. Those November 2019 allegations would accomplish their goal of ending my ministry forever, if not refuted here and now with clear documentation,” he said.

Last month, MacDonald called on the church to end its “false narrative in financial matters” against him, after elders disclosed details of the arbitration settlement awarding him at least $1.45 million in cash, an undisclosed amount in deferred compensation, and assets of his Walk in the Word broadcast ministry, including real estate.

The elders had previously maintained that Walk in the Word belonged to the church and that MacDonald was fired for cause. The church also cleared him of allegations of financial abuse.

MacDonald said he was forced to speak out after a failed attempt at reconciliation with church leaders on Oct. 19.

“HBC Elders met with me in a meeting led by guest Pastors Jeff Gill and Dave Stone. We were blessed by increased humility from Brian Laird, but saddened by other realities that dashed our collective hope for reconciliation progress – the real reason they had flown in to lead our meeting. How sad, when HBC Elders could have shown humility, owned their wrongs, and met me at mutual grace and forgiveness,” he said.

“With that long-awaited meeting unsuccessful, we have prayed and waited three more weeks, given the news the Elders had agreed to pray together about ‘how we may have sinned against James MacDonald.’ Yet still nothing but more legal threats and… total silence. All of that brings us reluctantly to the realization we have to set the record straight and move on,” he said as he argued how the church caused him and his family willful and irreparable harm.

MacDonald was ousted from HBC on Feb. 12, 2019, after making "highly inappropriate recorded comments" on Matthew “Mancow” Muller’s radio program as well as "other conduct" under a cloud of allegations of financial abuse and bullying. The HBC founder later filed a defamation lawsuit against the Chicago radio personality who recently announced that he was ending his show at the Cumulus Media talk station.

The megachurch founder was recorded talking about planting child pornography on Christianity Today CEO Harold Smith's computer, and making crude remarks about independent journalist Julie Roys — including joking that she had an affair with then CT Editor-in-Chief Mark Galli — and a vulgar reference to Ed Stetzer, executive director of the Billy Graham Center at Wheaton College.

Citing evidence from a “letter campaign,” he argued that a former HBC staff member colluded with Muller to make the controversial recording public while explaining how other church leaders betrayed him for power and access to money in the ministry.

“A letter campaign, led by former staff member Dallas Jenkins (not his first), which centered on HBC’s Elgin Campus and took the illegal recording to Mancow, whom he boasted of controlling. All this, with the goal of getting me, my family and the Executive Elders removed,” MacDonald wrote.

“HBC Elders acted unbiblically by not requiring the letter writers to meet with me, not vetting the accusations for accuracy or vetting the back story for a colluded agenda, nor ever meeting with me themselves. Everyone concerned has suffered great loss as a result,” he said.

MacDonald rued the manner in which he was fired by the church and shared the pain his family has suffered and continue to suffer because many still believe what he called a false narrative that was used to oust him.

“I was fired on a conference call I was not allowed to join – over issues I had never heard, sourced in letters I had never seen – from my 30+ year position as Senior Pastor of Harvest Bible Chapel (HBC). A group of Elders, who never met with me and mostly didn’t know me, fired me over a falsely edited recording they didn’t review and unvetted letters with many false allegations that were leaked to intentionally cause me and my family harm,” he wrote.

He explained that the church was a significant part of his life and being ostracized by the community as a result of the narrative behind his firing has been difficult.

“Harvest Bible Chapel was our lifetime calling, the only church our children ever knew, and the centerpiece to most of our greatest joys. From the time Kathy and I were 25 and 27, everything we did was for the people of HBC, and everything we loved was deeply intertwined with the church family we openly prayed to spend our whole lives serving,” he said.

“All three of our children met and married their spouses at HBC, two from HBC families. Our grandkids were deeply enmeshed with Harvest Christian Academy. Nearly all of our closest friends served or worked at HBC. And with a few exceptions, all of those relationships remain severed from us. Our deepest sufferings have come from being so ostracized, while waiting in silence for friends to love us despite what they have heard and fight for the truth to come forth. Nearly two years later, the vast majority at HBC still apparently believe what a handful of HBC Staff and Elders communicated falsely.”

The HBC did not immediately respond to a request for comment.

Have no idea who this is

How many workers who get fired leave with a lucrative arbitration settlement?

"Biblical" = Dressing like a biker while he's serving as a "pastor"

How does this happen? The pastor never met the elders in his church?

Macdonald is a wolf is sheeps clothing..his firing was entirely biblical!!!! His actions were not what a pastor should have done

Excellent point. If the "senior pastor" of a church "doesn't know" or "has never met" HIS own "elders", THAT would be reason to fire him alone! The buck stops with him. So he's upset about his OWN negligence in not attending conference callings or bothering to check up on who was hired to run things at HIS church?

I do, I sat under him for years. He had a wonderful teaching ministry.

God uses the fallen, even after King David slept with Bathshieba and killed her husband, God used him.

I have no judgement in this matter, I have not worshiped there for a long while, I moved.

10 posted on 11/27/2020 8:45:06 AM PST by chicagolady (Mexican Elite say: EXPORT Poverty and Let the the Stupid AmericanTaxpayer foot the bill !)
[ Post Reply | Private Reply | To 2 | View Replies]
To: chicagolady
God uses the fallen, even after King David slept with Bathshieba and killed her husband, God used him.

There is biblical difference between a king and a pastor/elder. For kings, the scripture says, "In order that the living may know that the Most High rules in the kingdom of men, gives it to whomever He will, and sets over it the lowest of men." Dan 4:17

But for pastor/elders, the bible requires they be above blameless and above reproach.

Pastors are supposed to be ‘cool’ and ‘with it’ donchaknow. Leather is great and much tougher than skin, but without a helmet, doesn’t increase crash survival chances very much. Wearing a leather biker vest to an indoor bible study is just plain vanity (”look at me! I’m a biker!”). If Harley wants me to advertise for them, they need to at least give me the decals, patches, or apparel.

Jesus blended in with the crowd so well that he had to speak up, and tell the guards that it was he that they were looking for in the garden.

Generally speaking The YBPDLN Ping List is published infrequently, however based on the exploits of the megachurch pastors posts can spike for a season.

Management will not ping members to every thread addressing megachurch pastors, but will tag articles of interest with the KEYWORD: YBPDLN.

I don’t know who he is, but he seems to have quite the ego.

Going public with claims that something a “church” did was unbiblical is kookoo IMO. The media will mostly ignore it, unless they can use it to mock and discredit the work of Jesus Christ.
Also, the sovereignty of God should be recognized in all things. God used all sorts of evil people (Assyria, Babylon, etc.)to judge and punish the Jews. Many times the instrument God used was more evil than Israel; at least by human standards.
I don’t understand a lot of things. But i am trying to trust God more.

Here’s a bizarre thing, though... I can’t even find out WHO replaced this guy as “Senior Pastor”.

If you go to Harvest Bible Church’s website, all they list is the “elders” of their various campuses and ministries.

Are they still searching a permanent new pastor? If they are, why not say so publicly?

This is what happens when the church is run more like a corporation than the body of Christ. And the world looks on and says “no thanks”.

Removing a pastor is very difficult for a church. The Pauline qualifications for an elder are outlined by the apostle Paul in 1 Tim 5:17-20. These men should be able to minister the Word of God and shepherd the flock during this difficult time for the church. The church will probably take some time to find the next senior pastor and deal with the inevitable fallout from this. We should be praying for these leaders.

Can someone offer a Bible citation for anything to do with firing a “Senior Pastor”?

If not, the question of what is “biblical” and what isn’t should be off the table, leaving simply state employment law and contracts.