The Jesuits’ decision to publish a radical article of this sort suggests that they believe public opinion is warming toward communism. FROM BREITBART NEWS: In “The Catholic Case for Communism,” America writer Dean Dettloff says that the militant atheism of Marxist politics is “understandable” because “Christianity has so often been a force allied to the ruling powers that exploit the poor.”

As a number of prospective presidential candidates from the Democrat party are openly donning the mantle of socialism, America took the issue one step further, suggesting that the negative reaction to “Bernie Sanders’s inspiring 2016 primary bid and the electoral success of Alexandria Ocasio-Cortez and Rashida Tlaib” represents a “revival of socialist hysteria.”

PM me if you want on or off the list.

There is no Catholic case for communism. Never believe leftists, folks. Never!

"They are simply the Romish army for the earthly sovereignty of the world in the future, with the Pontiff of Rome for Emperor ... that's their ideal, but there's no sort of mystery or lofty melancholy about it.... It's simple lust of power, of filthy earthly gain, of domination—something like a universal serfdom with them as masters—"

John Paul II would be crying. This is an incredible slap in the face to Christianity.

I remember back in the 60s, the Jesuits were part of the Communist working to overthrow every non communist government in Central and South America.

I didn’t really know who they were, actually still don’t, but they and an order of Nuns were really vile evil people.

Even back then the national news media were doing their bidding.

There’s the little problem of belief in God, but I’m sure Pope Frankie will find a work-around.

The pull of satan’s evil is strong.

In my youth, we considered the Jesuits the “Thinkers” in the Catholic Church.

Now they are the “Stinkers”.

Maybe this order needs to be supressed every 200 years or so.

What is mind-boggling is the virtual absence of anyone reprinting this simple, plain language on this topic from prior Popes. Indeed, it is noteworthy that the America article is absolutely silent on these Popes' words...that's like writing about the right to keep and bear arms without mentioning Heller.

Hence, it is clear that the main tenet of socialism, community of goods, must be utterly rejected, since it only injures those whom it would seem meant to benefit, is directly contrary to the natural rights of mankind, and would introduce confusion and disorder into the commonweal. The first and most fundamental principle, therefore, if one would undertake to alleviate the condition of the masses, must be the inviolability of private property.

If Socialism, like all errors, contains some truth (which, moreover, the Supreme Pontiffs have never denied), it is based nevertheless on a theory of human society peculiar to itself and irreconcilable with true Christianity. Religious socialism, Christian socialism, are contradictory terms; no one can be at the same time a good Catholic and a true socialist (emphasis added).

In this context, America prints an outright lie when it writes:

One might expect this from the Jesuits. I have never seen a religious order go so bad so fast. It started in the time period of the Berrigans. It has since progressed to where you see them come up with the worst garbage. I was hoping it would turn itself around but it hasn’t. 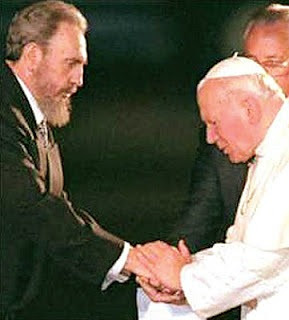 Then, with all due respect, you’d be wrong. 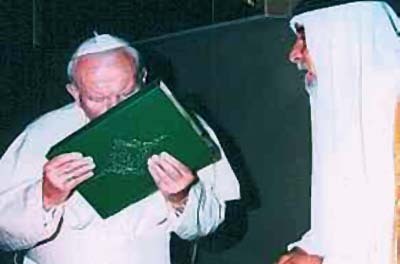 JP II on Islam:
May Saint John Baptist protect Islam and all the people of Jordan, and all who partecipated in this celebration, a memorable celebration.