The Real St. Nicholas – Not Fat and Not Very Jolly Either
Archdiocese of Washington ^ | December 5, 2012 | Msgr. Charles Pope

Today (Dec 6) is the Feast of St. Nicholas. The real St. Nicholas was nothing close to the St. Nick (Santa Claus) of the modern age. He was a thin curmudgeonly man with a zeal for the Lord that caused flairs of anger. Compromise was unknown to him. The slow transformation of him into “Jolly ole’ Saint Nicholas is a remarkable recasting of him centuries in the making. Some years ago the Washington Post featured an article entitled Poles Apart: Nicholas of Myra; How a 4th-Century Bishop Achieved Fame 1,500 Years Later, With a Whole New Attitude.

On this feast of St Nicholas, I thought I might take a break from yesterday’s rather heavy topic, and present lighter excerpts from the article that details the real St. Nicholas of Myra. It is a very engaging look at the cantankerous Saint who lived through some very tough times.

I am aware that hagiography (the study of the Saints) is sometimes more art than science. I cannot vouch for every detail in the article and would be interested if some of you intrepid hagiographers what to clarify, correct or add to the details given.

The Full Article (which details, somewhat thoroughly, St. Nicholas’ transition to Santa) can be read here: Poles Apart. I have also placed a PDF of the whole article which is more easily printed here: PDF – Poles Apart Nicholas and Nick

Enjoy this excerpt on the real St. Nicholas of Myra (aka Santa):

The year is 325. The place is Nicaea, a small town near the Black Sea in what is now Turkey. Thousands of priests, 318 bishops, two papal lieutenants and the Roman emperor Constantine are gathered to face a looming church crisis…..

One of the churchmen rises to speak. Arius, from the Egyptian city of Alexandria, tells the gathering that Jesus was not divine. He was just a prophet. Suddenly, a second man is on his feet, an obscure, cantankerous bishop named Nicholas. He approaches Arius, fist raised menacingly. There are gasps. Would he dare? He would. Fist strikes face. Arius goes down. He will have a shiner. Nick, meanwhile, is set upon by holy men. His robes are torn off. He is thrown into a dungeon.

Peer down through the bars. Behold the simmering zealot sitting there, scowling, defiant, imprisoned for his uncompromising piety. Recognize his sallow face? No? Well, no reason you should. But he knows you. He’s been to your house many times….

[O]n this holiday we examine the puzzling paradox of Santa Claus. On the one hand, we have the modern Santa, a porcine, jolly man who resides at the North Pole with a woman known only as Mrs. Claus. …

On the other hand, we have the ancient Santa. Saint Nicholas. Paintings show a thin man. He was spare of frame, flinty of eye, pugnacious of spirit. In the Middle Ages, he was known as a brawling saint. He had no particular sense of humor that we know of. He could be vengeful, wrathful, an embittered ex- con….No doubt, Saint Nick was a good man. A noble man. But a hard man.

Nicholas was born in Patara, a small town on the Mediterranean coast, 280 years after the birth of Christ. He became bishop of a small town in Asia Minor called Myra. Beyond that, details of his life are more legend than fact….He became a priest at 19, and bishop in his twenties….Diocletian ruled the Roman Empire; it was the early 300s, and…began the “Great Persecution.”…. Nicholas kept preaching Christianity, and was arrested and tortured for disobeying the new laws. He spent more than a decade in jail. Among his punishments, according to Saint Simeon’s 10th-century history, were starvation and thirst. That is how Santa got skinny…. Twelve years later, AD 312, ….Constantine triumphed. Across the empire, bishops and priests returned to work and Nicholas got out of jail. He tended to local business. He was not pleasant about it. At the time, Myra was a hotbed of Artemis-worship…Nicholas prayed for vengeance, and his prayers were answered. Artemis’s temple crumbled. ” …The priests who lived in Artemis’s temple ran in tears to the bishop. They appealed to his Christian mercy. They wanted their temple restored.….Nicholas was not moved. Prison had left him in no mood for compromise. “Go to Hell’s fire,” he is said to have said, “which has been lit for you by the Devil.”

The Time of Nick In his lifetime, Nicholas crusaded against official corruption and injustice, seeing both as an affront to God. Supposedly, his intervention — through fire-and-brimstone denunciations of corrupt officials — saved at least a half-dozen innocent men from the gallows or the chopping block. He was forgiven for punching Arius and rescued from the dungeon. In the end, his views on the Trinity were vindicated by the adoption of the Nicene Creed, which declares Christ divine. Saint Nick died on Dec. 6. The year could be 326 or 343 or 352, depending whose account you rely on. Why we know the day of the year, but not the year itself, will be explained forthwith…..

……Nicholas of Myra might not seem like the kind of person who relates to kids, and few acts attributed to him involve children. There are two, though neither is exactly the stuff of sugar plums and Christmas stockings. In one tale, widely told, Nicholas secretly delivers three bags of gold to a penniless father. The debtor dad uses the loot as dowries so his three girls do not have to become prostitutes….The second anecdote tells of the time a tavern owner robbed, murdered three children, hiding their remains in pickle barrels. …Fortunately, Saint Nicholas happened to walk through the tavern-keeper’s door….Soon, all three boys, were back home, reeking of pickle juice. What became of the shopkeeper is unrecorded…. By the Middle Ages, Nick had become the patron saint of children, and he had a new gig: gift-giving. Throughout Europe, the legend spread: He delivered trinkets to good kids and twigs to naughty ones. It was an uneasy transition — from curmudgeon to cuddle-bear. ….

As said above you can click on those links to read the full story of how St. Nicholas of Myra morphed into Santa Claus.

Here’s a Medieval Version of “Jolly old St. Nicholas.” The text is the Introit for the feast of St. Nicholas (Statuit ei Dominus) and translated says: The Lord made unto him a covenant of peace, and made him a prince, that the dignity of the priesthood should be to him forever.

Worth noting that mormons have the identical heresy as Arius promoted - along with others.

OTOH, as all factoids about Nick come from a hagiography written some 5 centuries after he supposedly lived, it’s quite probable that his story is a pack of lies.

St. Nicholas is the patron saint of pawnbrokers. According to a Paul Harvey “The Rest Of The Story” I heard years ago, the three bags of gold he gave to the penniless father eventually evolved into the symbol of pawn shops....the three gold globes

Some of it is legend, yes, but most of the legends connected with Catholic history, have some tracings on person to person story-telling.

Can you choose to believe?

Of course you could! Instead are you choosing to throw cold water?

Saint Nicholas of Myra, By Ilya Repin
How St. Nicholas Became Santa Claus: One Theory
An Orthodox priest at Bari; the story of St. Nicholas' bones
Turkish Town Exchanges St. Nick for Santa (Former Myra, hometown of St. Nicholas)
The Real St. Nicholas
St. Nicholas belongs in any reclamation of Christmas
Don't forget: St. Nicholas' Day is tomorrow [today] (get your shoes out!)
The Russian legend of St. Nicolas and St. Cassian(Soloviev's Application)
Life of Saint Nicholas the Bishop, from The Golden Legend compiled by Jacobus de Voragine
Yes, There Really is a St. Nicholas !

8 posted on 12/06/2012 4:58:28 PM PST by PLMerite (Shut the Beyotch Down! Burn, baby, burn!)
[ Post Reply | Private Reply | To 1 | View Replies]
To: NYer
Suddenly, a second man is on his feet, an obscure, cantankerous bishop named Nicholas. He approaches Arius, fist raised menacingly. There are gasps. Would he dare? He would. Fist strikes face. Arius goes down. He will have a shiner.

Presents for good children, coal or switches for bad ones, and a punch in the face for little heretics. Ho, ho, ho!

9 posted on 12/06/2012 6:15:59 PM PST by KarlInOhio (Big Bird is a brood parasite: laid in our nest 43 years ago and we are still feeding him.)
[ Post Reply | Private Reply | To 1 | View Replies]
To: NYer
The city of Bari in Italy claims to have the remains of St. Nicholas. The church there with his tomb is a popular pilgrimage/tourist destination.

When I was there it seemed like a lot of the pilgrims were from Poland. Speaking of Poles Apart...

in fact most of the early heresies are repeating. Because once the floodgates were opened 400 years ago, people have started denying beliefs backwards and now reject even Early Christian beliefs.

“in fact most of the early heresies are repeating. Because once the floodgates were opened 400 years ago, people have started denying beliefs backwards and now reject even Early Christian beliefs.”

Heresy has been around since Paul and Peter dealt with it, as recorded in Scripture.

15 posted on 12/07/2012 9:04:44 AM PST by Overtaxed
[ Post Reply | Private Reply | To 1 | View Replies]
To: Overtaxed
I followed the production of the most recent (2005) "The Lion, the Witch and the Wardrobe." While "Father Christmas," only has a brief appearance in the story, it's a pivotal one as he provides the Pevensy children with their armor and weapons to fight and ultimately defeat the white witch.

In developing, casting and costuming the character, the production team shied away from the "jolly old elf" meme and sought something more along the lines of a returning, old warrior. I think they pretty much hit the mark... 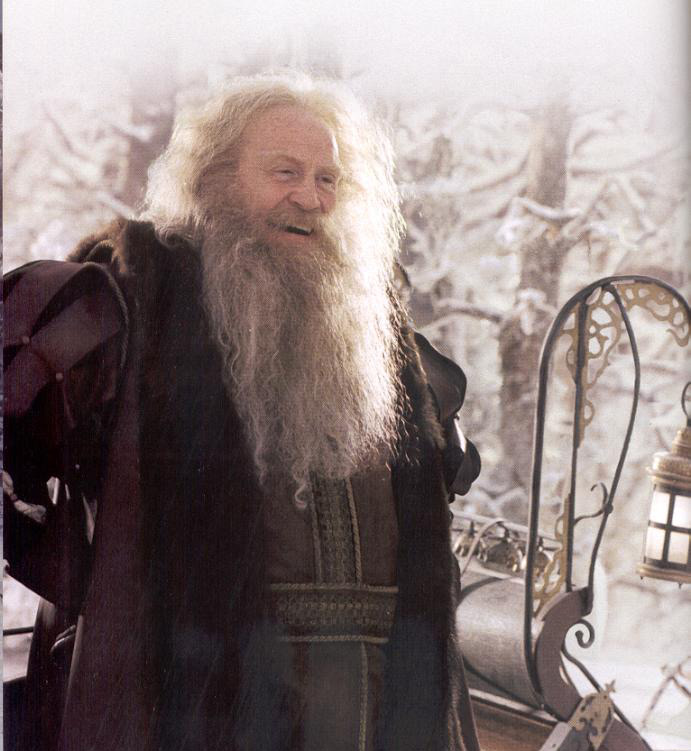 The second canon of Nicene Fight Club- YOU DO NOT TALK ABOUT NICENE FIGHT CLUB.

The third canon- No Arians.

The fourth canon- The Son is eternally God Begotten of the Father.

You made me laugh!

Actually, both Mormon and Jehovah’s Witness christology is even more debased than what Arius taught. Arius’ summary of his own false doctrine was “There was when he was not”, “he” referring to the Son. The modern interpolation of [a time] actually further debases Arius’ view: Arius regarded the Son as the first created, but like the Orthodox Fathers regarded time as having been created. Thus to Arius (and real full-blown Arians), the Son exists prior to time, but is not understood as is the right belief to be Co-Eternal with the Father and the Spirit.

Both the Mormons and the JW’s could summarize their beliefs about Christ with the interpolated version of Arius’ dictum as “There was a time when he was not” — making time into a prior creation. (And Mormon triadology is even more screwed-up, though nothing new — it’s essentially gnostic.)

Actually, there haven’t been many new heresies since the 14th century. The only one I can think of is the heresy of the “Name-Worshippers” from the early 20th century (though with a bit of consideration anyone with spiritual discernment could have seen that one lurking in the Evil One’s quiver after the resolution of the Palamite controversies, since heresies always come in matched opposing pairs, and the matched opposite to Barlaam of Calabria’s rationalistic denial of the Uncreated Energies hadn’t manifested itself until about 1913, when hey-presto, some adherents of the Jesus Prayer managed to fall off the royal road on the opposite side.)

“I came to give presents to kids and to punch heretics, and I just ran out of presents,” St. Nicholas.