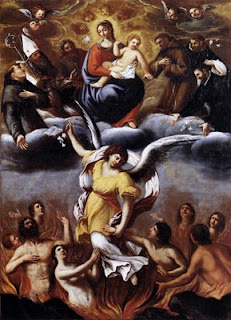 Set out below is an account of the experience of a priest who died and was shown Hell, Purgatory and Heaven. It is of course only his personal experience but there is nothing in it which is contrary to faith and I trust that some of you might find, as I did, that it was a warning and an encouragement.

.
On Sunday April 14, 1985, the Feast of the Divine Mercy, Fr Tom Maniyangat was going to celebrate Mass at a mission church in the north part of Kerala, and he had a fatal accident. He had a head on collision with a jeep. He was rushed to a hospital about 35 miles away but he died on the way.
.
Fr Tom's soul left his body and he experienced death. He saw his body and the people who were carrying him to the hospital. He heard them crying and praying for him.He then met his Guardian angel. His angel said to him: "I am going to take you to Heaven, the Lord wants to meet you and talk with you." He also said that as part of that journey he wanted to show Fr Tom hell and purgatory.
.
This is how Fr Tom describes his visit to Hell and Purgatory Hell"First, the angel escorted me to hell. It was an awful sight! I saw Satan and the devils, an unquenchable fire ,worms crawling, people screaming and fighting, others being tortured by demons. I was told there are seven "degrees" or levels of suffering in the netherworld. Those who committed "mortal sin after mortal sin" in life were suffering the most intense heat. They had bodies and looked very ugly, so cruel and ugly, horrifying. They were human but like monsters: fearful, ugly-looking things. The angel told me that all these sufferings were due to unrepented mortal sins.Then, I understood that there are seven degrees of suffering or levels according to the number and kinds of mortal sins committed in their earthly lives. The souls looked very ugly, cruel and horrific. It was a fearful experience. I saw people whom I knew but I am not allowed to reveal their identities. The sins that convicted them were mainly abortion, homosexuality, sins of the flesh, euthanasia, hatefulness, lack of forgiveness and sacrilege.
.
The angel told me that if they had repented they would have avoided hell and gone instead to purgatory. I also understood that some people who repent from these sins might be purified on earth through their sufferings. This way they can avoid purgatory and go straight to heaven. I was surprised when I saw in hell even Priests and Bishops, some of whom I never expected to see. Many of them were there because they had misled the people with false teaching and bad example.
.
After the visit to hell, my Guardian angel escorted me to Purgatory. Here too, there are seven degrees of suffering and unquenchable fire. But it is far less intense than hell and there was neither quarreling nor fighting. The main suffering of these souls is their separation from God. Some of those who are in Purgatory committed numerous mortal sins; but they were reconciled with God before their death. Even though these souls are suffering, they enjoy peace and the knowledge that one day they will see God face to face.I had a chance to communicate with the souls in Purgatory. They asked me to pray for them and to tell the people to pray for them as well, so they can go to heaven quickly.
.
When we pray for these souls we will receive their gratitude through their prayers and once they enter heaven their prayers become even more meritorious.
.
Next, my angel escorted me to heaven passing through a big dazzling white tunnel. I never experienced this much peace and joy in my life. Then immediately the heaven opened up and I heard the most delightful music, which I never heard before. The angels were singing and praising God. I saw all the saints, especially the Blessed Mother and St. Joseph, and many dedicated holy Bishops and Priests who were shining like stars.
.
And when I appeared before the Lord, Jesus told me: "I want you to go back to the world. In your second life you will be an instrument of peace and healing to my people. You will walk in a foreign land and you will speak in a foreign tongue. Everything is possible for you with my grace." After these words, the Blessed Mother told me, "Do whatever He tells you. [John 2:5] I will help you in your ministries."Words can not express the beauty of heaven. There we find so much peace and happiness, which exceed a million times our imagination.
.
Our Lord is far more beautiful than any image can convey. His face is radiant and luminous and more beautiful than a thousand rising suns. The pictures we see in the world are only a shadow of His magnificence. The Blessed Mother was next to Jesus; she was so beautiful and radiant. None of the images we see in this world can compare with her real beauty. Heaven is our real home: we are all created to reach heaven and enjoy God forever.
.
Back to Earth.
As they were moving my dead body to the morgue, my soul came back to the body. I felt an excruciating pain because of so many wounds and broken bones. I began to scream and then the people became frightened and ran away screaming.One of them approached the doctor and said: "The dead body is screaming." The doctor came to examine the body and found that I was alive. So he said: "Father is alive. It is a miracle - take him back to the hospital."
TOPICS: Catholic; Moral Issues; Theology
KEYWORDS: Navigation: use the links below to view more comments.
first 1-20, 21-40 next last
1 posted on 11/22/2008 3:17:35 PM PST by NYer
[ Post Reply | Private Reply | View Replies]
To: Salvation; narses; SMEDLEYBUTLER; redhead; Notwithstanding; nickcarraway; Romulus; ...

For your discernment, ping!

Satan is not in hell yet. He was referred by Christ as the “God of this world” and the “Prince and power of the air”. He is not cast into hell until the 2nd Advent of Christ.

My favorite is Dante’s purgatorio.

4 posted on 11/22/2008 3:29:59 PM PST by Mercat (God doesn't call me to be successful. God calls me to be faithful. Mother Teresa)
[ Post Reply | Private Reply | To 1 | View Replies]
To: NYer
I also understood that some people who repent from these sins might be purified on earth through their sufferings.

For your discernment, ping!

There is no difference, for all have sinned and fall short of the glory of God, and are justified freely by his grace through the redemption that came by Christ Jesus. God presented him as a sacrifice of atonement, through faith in his blood. Romans 3:23-25

Suffering isn't needed to purify that which Christ's blood has already cleansed ... so I'm all through discerning now, thanks.

Matt. 5:26,18:34; Luke 12:58-59 – Jesus teaches us, “Come to terms with your opponent or you will be handed over to the judge and thrown into prison. You will not get out until you have paid the last penny.” The word “opponent” (antidiko) is likely a reference to the devil (see the same word for devil in 1 Pet. 5:8) who is an accuser against man (c.f. Job 1.6-12; Zech. 3.1; Rev. 12.10), and God is the judge. If we have not adequately dealt with satan and sin in this life, we will be held in a temporary state called a prison, and we won’t get out until we have satisfied our entire debt to God. This “prison” is purgatory where we will not get out until the last penny is paid.

1 Cor. 15:29-30 - Paul mentions people being baptized on behalf of the dead, in the context of atoning for their sins (people are baptized on the dead’s behalf so the dead can be raised). These people cannot be in heaven because they are still with sin, but they also cannot be in hell because their sins can no longer be atoned for. They are in purgatory. These verses directly correspond to 2 Macc. 12:44-45 which also shows specific prayers for the dead, so that they may be forgiven of their sin.

PRAYING FOR THE SOULS IN PURGATORY -

Baruch 3:4 - Baruch asks the Lord to hear the prayers of the dead of Israel. They can intercede on behalf of the people of God.

2 Macc. 15:12-16 – the high priest Onias and the prophet Jeremiah were deceased for centuries, and yet interact with the living Judas Maccabeas and pray for the holy people on earth.

Rev. 5:8 - the prayers of the saints (on heaven and earth) are presented to God by the angels and saints in heaven. This shows that the saints intercede on our behalf before God, and it also demonstrates that our prayers on earth are united with their prayers in heaven. (The “24 elders” are said to refer to the people of God – perhaps the 12 tribes and 12 apostles - and the “four living creatures” are said to refer to the angels.)

I wonder if they play Iron Maiden in hell. If they do, it might not be so bad...

Many are called..Few are chosen.

Maybe because purgatory is a fabrication of the Catholic church and this is a bizarre hallucination.

It’s not even an hallucination...it’s imagination...The same image he’s likely been preaching for years.


What happens when we die?
What is on the other side?

Now mankind has startling new evidence from people declared clinically "dead" who have returned to tell of their experience.

Their descriptions are so similar... so vivid... that they may change mankind's view of life, death and survival forever.

LIFE AFTER DEATH
a report from the other side

Man: I can remember... the nurses... saying something about "code pink," and then clearly I remember... one of the doctors saying "he's gone." ...I couldn't understand how they could be so worried, when... I felt so happy to be outside of my body, and so peaceful. It was fabulous. Everything was bathed in a, an eerie white light... suddenly I found myself in a huge, white room... where I had to take a number and be seated.

Man 2: I must have died, because I recognized my body was rising up, like an elevator. And I was passing through these rounds of light, and time, and space, and all of a sudden I came to this area which was filled blindingly with light and energy and space... and I had to take a number and sit down.

Woman: I was flying down this... corridor, with this... blue light, and... um, I ended up in this room where I had to reach up, and take a number, and then sit down.

[a mechanical sign reads NOW SERVING 32. The digits turns over to read 33.]

13 posted on 11/22/2008 3:55:53 PM PST by Alex Murphy ( "Every country has the government it deserves" - Joseph Marie de Maistre)
[ Post Reply | Private Reply | To 1 | View Replies]
To: NYer
The sins that convicted them were mainly abortion, homosexuality, sins of the flesh, euthanasia, hatefulness, lack of forgiveness and sacrilege.

If it works there then it should work here. Next time I will not complain when the clerk tells me to “take a number”.

'fraid not. A recent cartoon shows a client at a radio receiver in Hell, searching for stations. The devil behind him says "It's all smooth jazz." It'll be Kenny G for you, buddy!

Apparently this website lists the rest of the story: