After the first Persian wars an exceptional rich vein was discovered in the Attic silver mines of Laurium. This gave new opportunities for Athens. One group led by Aristides wanted the profits to be spread out over the population, as it was normal in those days, others who were led by Themistocles wanted something different.
He was the only one who had correctly understood the message of the oracle of Delphi that Athens should be protected by a wooden wall: he debated that Athens should built a fleet of 200 triremes. He pointed out to the Athenians that a strong navy was crucial in their conflict with Aegina.
Probably he realised that there was also the danger of a new Persian invasion, but he wisely did not mention this as it seemed far from likely at that time in the eyes of most people. This decision made Athens at once the biggest naval force in Hellas.

The Persians realised that the only serious threat left was the Greek fleet. The Isthmus was an impressive defensive line but the Greeks were so outnumbered that it was only a matter of time before the last Greek army was destroyed the Persians reasoned. And without the Greek fleet to support them the Greek armies at land would definitely form no problem for the huge Persian army. A decisive sea-battle was needed Xerxes decided.

We know that the Persians did not have a standing fleet themselves. Until now they had mostly fought in Asia Minor, and a fleet was never needed. The Persians had focused on their landarmies and neglected their seamanship. Luckily for them had they subjected the Phoenicians.
These people were excellent sailors and had the knowledge to built vast vessels who could oppose the Greek triremes. The Persian fleet mostly consisted of Phoenician ships, but strangely enough they also used Asiatic Greek ships and sailors.
They must have doubted the motivation of these troops to fight other Greeks, but they were used nevertheless. Maybe the real reason was that Xerxes thought that it was safer to take them with him instead of leaving them in Asia Minor.
It was certainly not unlikely that the Greek colonies in Asia Minor would revolt once more when he was fighting in Hellas. Now he prevented this from happening, and he made sure that the Greeks did fight by holding their political leaders hostage in Asia Minor.

The Greek fleet consisted of 310 ships. All fine forces in Greek terms, but puny in the face of the fleet Xerxes had collected from all his empire. Athens, as strongest naval force in Hellas, was specialised in using the battering-ram while the Peloponessian fleet more relied on their infantry on the ships.
The Greek ships were more manoeuvrable than the Persian ones as they did not have a high stern-post like the Phoenicians did. The benefit of a high stern-post was that archers could attack the oarsmen before the ships hit eachother, but it also made the ship slower, more difficult to manoeuvre and less stable.

The Persians were still commanded by Xerxes.
The Greek fleet was in the hands of Themistocles who had so successfully led the navy during the battle at Artemisium. This Athenian man was very rebellious in his youth but eventually he chose for a career in politics were his natural slyness was the most useful.
Just like Miltiades before him he had complete confidence in his own judgement, and this way he managed to gain the trust of others.
There was another resemblance with Miltiades: he was not the official commander during the battle, but he certainly was the architect of it.

Phase one: diplomacy and blackmail.

The citizens of Athens were determined to get revenge for the destruction of their loved city. Their allies had lost faith in a good ending of the war after the victories of the Persian army. The Spartans wanted to retreat to their Isthmus and let the navy fight on the open sea besides the Isthmus.
It was Themistocles who was the only one who realised that the navy should not fight on open sea, but in the narrow strait of Salamis where it had retreated to.
The battle of Artemisium had learnt him a valuable lesson: the Persian numbers would not count in a narrow strait, but they would count against them.

Themistocles' problems were to persuade his allies that this was what they had to do, and persuade the Persians that that was what they wanted to do. The problem of Sparta was quickly solved when he threatened that Athens would sail off with its navy and found a new city in the west if Sparta still demanded to fight on the Isthmus.
Convincing the Persians to enter the strait of Salamis was more difficult, but Themistocles solved this in a genius way. He sent his best slave to Xerxes to tell him that the Greek navy was retreating to the Isthmus of Corinth to form a combined force with the army.
This message sounded so reasonable to Xerxes that he ordered the Egyptian squadron of his fleet to block the strait of Megara.
The remaining Persian ships stopped at the island of Psyttaleia and blocked the entrance to the strait of Salamis: the Greek fleet can not escape.

Phase two: the confusion of the narrows.

To give Xerxes the impression that they were actually retreating to Corinth Themistocles sent the Corinthian squadron of his fleet to the north at dawn. Their second goal was to make sure that the Egyptian squadron would not attack the Greeks in the rear in the heat of the battle.
The Corinthian vessels raised their sails, which was normally only done when fleeing, to convince the Persians that victory was near. Little did Xerxes know that Themistocles kept a part of his fleet hidden in the bay of Ambelaki, while the main force was hidden behind the island Farmakoussai a little more to the north.

Xerxes commands his fleet to enter the strait in order to hunt down the fleeing Greek fleet. However, when the Persian fleet entered the strait the trap closed: the Aeginetans and Megarians rushed out of the bay of Ambelaki and attacked the Ionian ships which formed the rear of the Persian fleet.
The battle begins when the stern of a Phoenician ship is ripped off the rest of the ship. The Greek main force suddenly appeared on the battlefield and the confusion among the Persians only increased.

The heavier Persian ships are no party for the fast and trained Greek triremes. On top of that changed the weather and the slow Persian ships lost even more speed and manoeuvrability in the rough water. The Phoenician battle-array fell apart when their admiral got killed, and the Persian fleet flees to the south chased by the Greek main force.
As they pass the bay of Ambelaki, where the Ionian part of the Persian fleet was fighting the Aeginetans and Megarians, the Greeks end their chase and attack the Ionian ships in their back. They were no party for the Greeks and most ships got destroyed. The survivors struggled out of the narrows while they were hunted down by the Greeks until they reached Psyttaleai.
The Persian garrison on the island got defeated by soldiers of the Greek navy while the Corinthian ships had managed to stop the Egyptian squadron that was encircling Salamis.

The results of the battle.

The Persians had lost 200 ships, while the Greeks only lost 40 triremes. There was more than enough reason for celebration on Salamis that night, and there was cause for celebration on Sicily as well where the Syrcusans had crushed the Carthagian advance at Himera. Themistocles had broken Xerxes' fleet and his nerve.
Disillusioned he went back to Persia with a large part of his army, but the rest remained in Hellas. Xerxes' retreat can be seen as an cowardly act, but you must realise that the Persian kings normally made the decisive blows and let the rest to their generals. The battle of Salamis was definitely not the final blow as Xerxes had hoped, but the Persians could afford the losses much easier than the Greeks.
Xerxes left a huge army under the command of Mardonius behind, and gave him the order to conquer the rest of Hellas. Hellas was still not safe... Until The battle of Plataea that is.

The Greek wars are also a classic tale of the superior
character of the Greek commanders to the blue blood
Xeres. 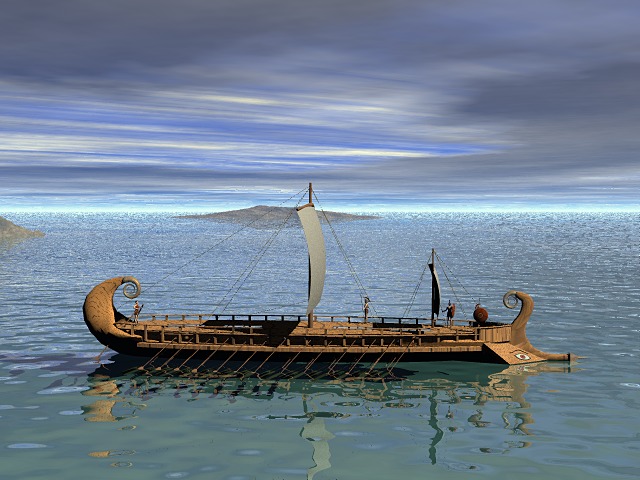 The West - Kicking Eastern butt since 480 BC.

Without the Athenian's Navy, defeat. Without the Spartan infantry, disaster.

War is not at sea, nor on land, nor in the air, nor in space, but in all at the same time. All forces must work together, like the fingers of the hand.

A modern replica of a Greek Trireme that fought at the Battle of Salamis in 480 BC against the Persians.

The bronze ram fitted to the bow of a Trireme was designed to punch a hole in the enemy's ships in order to sink them. The bow of Greek Triremes were also painted with a set of eyes as the Greeks believed this gave the ship mythical vision at night and in bad weather.

If you want on or off the Western Civilization Military History ping list, let me know.
17 posted on 09/21/2003 7:57:04 AM PDT by Sparta (My tagline has been listed more times than Wesley Clark's flip-flops)
[ Post Reply | Private Reply | To 1 | View Replies]
To: Valin
One of my favorite stories from Herodotus:

After the battle Thermistocles was feted throughout Greece. He was at one celebration when a man tried to mock him. The man said, "If I had been from Athens, I could have accomplished as much."