GRANTS PASS, Ore. (AP) -- Based on closer mapping, the size of the massive Biscuit Fire dipped below the half-million-acre mark Friday as firefighters built the last bits of containment lines to securely encircle the blaze.

The delay in full containment was caused by a problem area on the northwestern flank of the fire near Mislatnah Creek, a tributary of the Chetco River, where isolated winds pushed the fire over a primary bulldozer line, Crawford said.

Despite the dip in size, Biscuit remained the biggest wildfire in the nation for this year, as well as the most expensive. The firefighting bill moved up to $117.7 million.

Total personnel continued to decrease, hitting 3,100, less than half the number of people at the fire's peak. Some crews were sent off to rest or to other fires and those remaining largely worked on mop-up and rehabilitation.

The declining fire danger persuaded Siskiyou National Forest to open the Rogue River Trail to hikers, but the Bear Camp Road, the primary shuttle route for whitewater rafters on the wilderness section of the Rogue, remained closed.

Downstream from Agness, the Quosatana campground remained closed, but the boat ramp was to open Saturday.

Campfires were prohibited throughout the national forest.

Evacuation warnings remained in force for the Wilderness Retreat subdivision on the Chetco River east of Brookings and the upper Pistol River drainage.

In southeastern Oregon, the Visher Creek Fire was fully contained at 300 acres of sage brush 20 miles south of Juntura, and the Oliver Fire was 20 percent contained at 400 acres on the Malheur National Wildlife Refuge.

TOPICS: Extended News
KEYWORDS: christines; economicterrorism; ecoterrorism; greenjihadists; kalmiopsisburnt; oregonburning; oregonstillburning; rootsuckers; ruralcleansing; treehuggers Navigation: use the links below to view more comments.
first 1-20, 21-40, 41-60, 61-80, 81 next last
So are we witnessing a little revising of history here to get the total area burned/burning of the Biscuit Fire down below 500,000 acres?

Naah, the Card Carrying Green Enviros who sit on their Keysters and play Florist Circus Klowns, would never do that.

I know that it will come as a shock to you. This may be some lefty revising of reality.

Jeff, you know the left would never revise history.
5 posted on 08/30/2002 10:05:30 AM PDT by Grampa Dave
[ Post Reply | Private Reply | To 1 | View Replies]
To: Grampa Dave
KURY radio this morning reports the containment date has been rolled back to September 4 because of activity on the fire. There is still a spike camp at the Gardner Ranch although the Wilderness Retreat area is off the pre-evac notice this morning.
6 posted on 08/30/2002 10:05:35 AM PDT by Granof8
[ Post Reply | Private Reply | To 1 | View Replies]
To: Granof8
Please, let us know where the non containment areas are, if you hear.
7 posted on 08/30/2002 10:07:09 AM PDT by Grampa Dave
[ Post Reply | Private Reply | To 6 | View Replies]
To: Grampa Dave
FORD SORRY FOR DONATION
CURRY COASTAL PILOT
Published: August 28, 2002
The regional manager of Ford Motor Co. sales met with Brookings-Harbor officials Tuesday to apologize for a $5 million contribution the firm made to the Audubon Society.
"We thought we were putting money toward bird watching," said Larry Gregorson, head of Ford's sales division in the Pacific Northwest. "We ended up making a contribution that was not considerate of our base of customers."
The session with Gregorson was organized by Les Walker, owner of the Brookings-Harbor Ford dealership, and Bill Ferry, spokesman for the Rural Resources Alliance, which is being organized among the timber, farming and fishing industries.
Attending were nearly 20 representatives of the Port of Brookings Harbor, Brookings-Harbor Chamber of Commerce, City of Brookings and a few fishermen and farmers.
When Port Manager Russ Crabtree said he knew of five commercial fishermen who planned to switch from Ford trucks to other brands, Gregorson acknowledged the problem.
"We know we made a mistake, and we're owning up to that," he said. "We're trying to repair the damage and we don't want it to happen again."
Gregorson told them the controversial donation from the company's Ford Fund provoked an outcry from Ford's customers in the natural resource industries. That, in turn, has resulted in major changes in the way the firm considers donations in the future.
"You who use Ford trucks are the backbone of our base of customers," Gregorson said. "To have done something that offended our customers was unacceptable."
Instead of dwelling on the Audubon donation, he pointed instead to contributions the Ford Fund does make to rural-based programs, including Future Farmers of America for high school youth, a program called Provider Pals educating urban youth about natural resource industries, and Ford Country Scholars to provide college scholarships in rural areas of 11 states.
In the wake of the contribution, Gregorson said the sales division is now involved in decisions on Ford Fund contributions, relying in turn on information from dealers.
Local officials told Gregorson about what they called the ongoing attack on natural resource industries by some environmental groups like the Audubon Society.
Transferred last March from Philadelphia to Seattle, Gregorson told them "the whole natural resource thing is not big in the media in the Northeast or the Midwest. ... Until you get to the Northwest, you really don't understand the problem."
And, he warned, Ford has to be careful about alienating other customers with its donations or positions.
"The same groups attacking you are attacking us," he explained. "It's why we look primarily at education. It's the root of the problem; it's lack of understanding and lack of communication that cause the problem."
Walker praised Gregorson for coming to Brookings and urged area residents to spend less energy on small local arguments so that they have more resources for the larger lobbying effort that is necessary. "If we just take this little group here, we've got a start."
"The best thing you can do is keep me apprised," Gregorson told the group. "Your view needs to be brought up and it needs to be counted."
8 posted on 08/30/2002 10:08:21 AM PDT by Granof8
[ Post Reply | Private Reply | To 1 | View Replies]
To: Grampa Dave
Bump to the top!
9 posted on 08/30/2002 10:12:01 AM PDT by Salvation
[ Post Reply | Private Reply | To 1 | View Replies]
To: Grampa Dave
Eco-wars bump
10 posted on 08/30/2002 10:12:45 AM PDT by AAABEST
[ Post Reply | Private Reply | To 5 | View Replies]
To: Grampa Dave
A downward revision of 288 acres is news?

This is interesting to how the smoke from the Tiller and Apple fires going a little south and mainly east. While the smoke from the Biscuit fire is head a little west and south. We had smoke in the Kali upper/North wine country yesterday afternoon. It never got here until later at night with the coastal winds and after dark you could smell smoke. 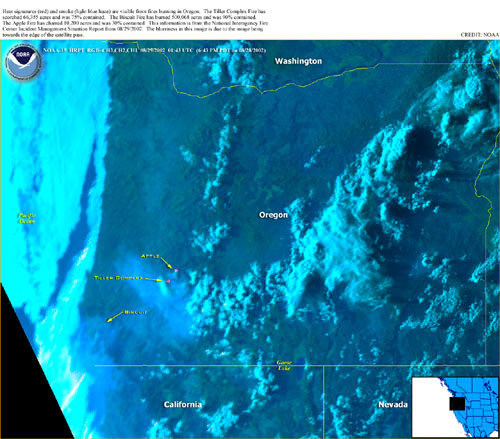 There has too be some reason for trying to keep this fire below 500,000 acres, so they are recalculating or skewering the data.

When more Americans learn how to use their purchase $'s as weapons in our wars against the left wing and the enviralist demons, we will start to see changes.

Play Your Part Safely, There Are No Curtain Calls For Unsafe Acts!!

* Containment indicates a non-burnable trail was constructed around the entire perimeter of the fire.

Yesterday, approximately  13,902 people were supporting firefighting efforts on 19 wildland fires exceeding 500 acres in size.  Currently there are five fires listed on this report that are being managed for resource benefits by fire use teams.  According the latest US Drought Monitor, monsoon rainfall across Arizona and New Mexico has been scattered and light, and has resulted in no net change in existing drought conditions.  This is resulting in large late season wildfires throughout the southwest.

This report is based on the daily Incident Management Situation Report released at the National Interagency Fire Center (NIFC) in Boise Idaho.  All wildland fires in forested areas greater than 100 acres and in grassland areas greater than 300 acres are reported in the NIFC Situation Report.  For the ease of our readers, this Morning Report only includes wildland fires greater than 500 acres.  These are generally the fires that threaten homes, businesses, public and private property, and areas of special interest to our readers.

Summary of Fire Activity Across the United States

Regional Large Fires (500 acres or greater) are summarized below; for more detailed information on any specific fire, visit:   http://www.nifc.gov

Oregon:  The Biscuit Fire is located 26 miles southwest of Grants Pass in the Siskiyou and Six Rivers National Forests.  Fireline rehabilitation and mop-up are underway on the east and south perimeters.  Moderate fire behavior was observed along the west and northwest flanks. The fire made a run made in the Mislantah Creek drainage on the west perimeter producing numerous spot fires.  Dozers constructed fireline in that area.  Firefighters are experiencing moderate fire behavior in heavy timber from the Apple Fire, 21 miles east of Glide.  Structure protection remains in place for twenty residences. The Tiller Complex Fire, 25 miles east of Canyonville, consists of eight large and numerous small fires.  The complex is seeing some moderate fire behavior in grass, brush, and timber.  Aerial ignition to burn out interior islands is continuing.  Structure protection is in place for sixty-seven homes.  The Oliver Fire, a new fire in the Malheur Wildlife Refuge, has been contained.

Washington:  The Quartz Mt. Complex Fire, northwest of Winthrop, is burning within the Pasayten Wilderness and is being managed for resource benefits in a monitor status. Active fire behavior was observed in lodgepole pine and subalpine fir. Three administrative sites are being protected.

Arizona:  The Trick Fire, 17 miles southwest of Williams, had moderate fire behavior in ponderosa pine and brush.  The fire has burned into the Sycamore Canyon Wilderness Area.  Crews are constructing indirect line in preparation for a burnout operation.   Steep, inaccessible terrain and limited water resources are slowing containment efforts.  The Pack Rat Fire Complex, eight miles east of Pine, is composed of the Pack Rat and 5 Mile fires.  The fire received precipitation yesterday, and fire activity has moderated in ponderosa pine, mixed conifer, and chaparral.  This allowed crews to make good progress in constructing fireline