The video has begun circulating on social media since being posted on Monday and has already been viewed more than 80,000 times.

Speaking to MSNBC, Romney said: "It is disgusting to invite people like that to meet the former President of the United States.

Romney: I think it's been clear that there is no bottom to the degree to which president trump will degrade himself and the nation. pic.twitter.com/6Jw5vDQ6If— Acyn (@Acyn) November 29, 2022

"I think it has been clear that there is no bottom to the degree in which President Trump will degrade himself and the nation."

On November 24, rapper West posted a video online in which he described meeting with Trump at his Mar-a-Lago resort in Florida.

West has faced significant backlash and condemnation for anti-semitic comments he has made and some companies have cut ties with him.

During the clip, the West said that Trump was "really impressed" with Fuentes while making no mention of his past antisemitic comment

Following the backlash Trump has received from both Republicans and Democrats, he took to his own social media platform, Truth Social, to defend the meeting.

"So I help a seriously troubled man, who just happens to be black, Ye (Kanye West), who has been decimated in his business and virtually everything else, and who has always been good to me, by allowing his request for a meeting at Mar-a-Lago, alone, so that I can give him very much needed 'advice,'" he wrote.

She insisted that Republican Florida Governor Ron DeSantis was the real Republican while speaking in a recent video discussion on her Substack over the weekend.

"[Trump] is so done. He is on his last legs," she said. "There are so few Trump diehards."

Once again, be careful who you get into bed with!

Again Trump has all the right enemies.

Mitt is ALL bottom. He’s an ass.

I’m not eager to jump on the “Ron DeShaftedus” bandwagon just another Jeb Bush supported by Jeb Bush and those of his “clan”. 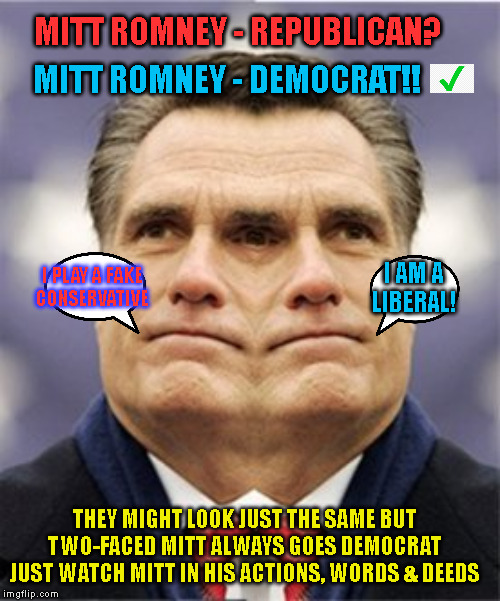 Not surprised Romney would have such interests in Trumps “bottom”

Evidently, this is National Astroturf Day.

Romney... you are the disgusting RINO who is so petty that he kicked your butt that you can’t get over it.

Haven’t heard from skeletor bitch in a while. Shame. Wish it was a longer while.

a coulter endorsement for ron

as apposed to no brain

Without Trump, Romney would never make news. Isn’t that the definition of a parasite?

Has he ever said anything like that about ANY Democrat? Hillary Clinton? Ted Kennedy? Barney Frank? Oh, bad example.

Theres a reason why even Obama looked better than him in 2012..I had to be forced to vote for Romney..he makes my skin crawl he is vile and disgusting he made Obama look decent

Mittens is the most narrow minded Rino in the country.

I will admit, when Trump endorsed Romney I did feel like he was scraping the absolute bottom.