Biden’s war on fossil fuels may reduce funding for America’s national parks, according to the Western Energy Alliance, a nonprofit energy industry association for the U.S. West.

The Great American Outdoors Act (GAOA), which was passed in August 2020, provides $1.9 billion for public lands and national park restoration, primarily from onshore oil and gas development on federal lands.

The act combined the restoration and Land and Water Conservation funds, which supplies $900 million in matching grant money for state and local parks.

Biden campaigned on a promise that he was going to eliminate the oil industry, and since taking office he has taken more than 100 steps to make good on that promise. Net-zero goals, if achieved, will replace all coal, oil and gas with wind, solar and other forms of renewable energy.

If that happens, the alliance claims, the royalties from renewable industries operating on federal lands would only generate $11.5 million for the restoration fund.

Biden “promised no federal oil at all. That was his campaign pledge,” Kathleen Sgamma, president of the Western Energy Alliance, told Cowboy State Daily. “Now, he ran into this nasty thing called the law.

“But if his policies were taken to their logical conclusion – no more federal oil and gas would be allowed – then there would be no funding for the Great American Outdoors Act.”

Biden had placed a moratorium on new oil and gas leasing, but a judge in the Western District of Louisiana issued a permanent injunction against the Biden administration. The ruling concluded that the moratorium took steps reserved for Congress and violated the Mineral Leasing Act and the Outer Continental Shelf Lands Act.

Of the $1.9 billion in funding for the GAOA, 70% goes to the National Park Service to reduce deferred maintenance in national parks. The rest goes to various agencies that manage federal lands.

The GAOA provided $204 million in funding for projects in Yellowstone National Park, including repairs to historic buildings and roads to the Old Faithful geyser. The fund may also support repair projects from last summer’s floods.

Sgamma said royalties from oil and gas production on federal land will support the restoration fund for some time. Existing leases will continue to produce for a while, but as production at those wells decline, the royalties will evaporate.

“The president’s preferred wind and solar contributes basically nothing to conservation,” Sgamma said.

The Fascist Bastards believe the path to control depends on keeping patriots on their porch.

Just hand them over to the United Nations.

They can turn them into CCP military bases.

It’s been shown time and time again that national parks are racist! Blacks prefer not to visit them, so the parks really shouldn’t be funded at all.
/s

Allow me to disagree in a polite manner.

National Parks are NOT racist. They’re for illegal aliens of ALL RACES to coop, poop, and grow pot in. (Great White Hunter STAY YOU HOME.)

I thought that was the role of the National Forests.

Guarantees inflation through the roof, astronomical prices in stores - if there is anything on the shelves. Trucks shut, railroads shut - cars, out of fuel & stranded everywhere.

National parks, open or closed, will be the least of anyone’s worries should the Biden/Klain/0bana plan succeed.

As is the enviros care. In DC, the EPA is staffed by green fanatics who ride bikes to work with solar panels on their caps to power their lights. They would return us to the stone age if they are allowed. 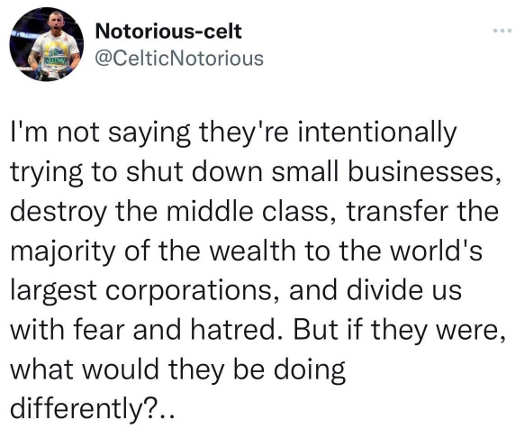 Unintended consequences. Or maybe not.

If he eliminates the oil industry we die, shivering in the dark. But you need not worry about the future of the human race. A large number will die out, but not all. The remaining ones will go on to repopulate the Earth.

They are the ruling elite who, of course, had enough gas for their limousines, fuel for their jets, electricity to keep their pool filter motors running so they can have their Chateau Lafitte Rothchild by the pool while they talk about how bad Trump was.

How many live within an electric vehicle’s range of a National Park, anyway?

I believe the only goal Joe has in mind every day is where’s the nearest ice cream shop?

The Dems answer will be “it’s only 2 billion”.

No amount of money/debt, means anything to them.