An apparent anti-COVID-19 vaccine digital billboard had Charlotte residents and social media buzzing Sunday afternoon. But it wasn't anti-vaccine at all. Quite the opposite.

The billboard was on the side of a truck being driven around uptown Charlotte as thousands walked the streets during Sunday's Carolina Panthers game at Bank of America Stadium.

The message featured simple white lettering on a black background and read, "Don't get vaccinated." Under it was the name "Wilmore Funeral Home." It also included a web address for WilmoreFuneralHome.com. But the funeral home doesn't exist.

The billboard was the brainchild of David Oakley, owner of the BooneOakley advertising agency, which went public about it in a tweet:

He spoke to CBS Charlotte affiliate WBTV about why he wanted to have the provocative message on people's lips.

While at first glance, the billboard may have appeared to be an anti-vaccination plug, Oakley maintains it was meant to carry a pro-vaccine message.

"A lot of the advertisements that you see right now for pro-vaccine are very simple like, 'get the shot', 'get vaccinated'. It's very simple. We wanted to do something that saw things from a different perspective," he said.

"The idea came about when we thought about who would really benefit from people not getting the shot and you kind of go back to the simple fact that people are dying that aren't vaccinated, so who benefits from people dying? A funeral home!" Oakley explained.

He said the faux funeral home is named for the neighborhood where his business is located.

But while the Wilmore Funeral Home isn't real, WilmoreFuneralHome.com is very much a real website. It features the same black background with white lettering. The website's message reads, "Get vaccinated now. If not, see you soon."

david-oakley-owner-of-booneoakley-ad-ahgnecy-in-charlotte-speaking-with-wbtv-on-092121.jpg David Oakley, owner of BooneOakley ad agency in Charlotte. WBTV The message links to the website for StarMED Healthcare, a company that's helped to vaccinate thousands of people in Charlotte.

Chris Dobbins, Chief Relations and Response Officer for StarMED, sent WBTV a statement about the company's website being linked to the digital billboard:

"StarMED Health has and will continue to administer and support COVID Testing, Vaccinations, and Antibody Therapy in response to this ongoing Pandemic. While we recognize there are varying opinions and different types of media messages, we support all efforts to educate and motivate our community to prevent and stop the spread of this virus."

WBTV asked Oakley if he was worried his edgy messaging might rub some people the wrong way.

"I was a little bit worried before we started, but when I really think about it, if this advertisement gets one person vaccinated, it was worth it," he replied.

A photo of the billboard truck went viral on Twitter Sunday. Thousands of people retweeted the image.

Garrett Crenshaw, owner of Crenshaw Visions, owns the digital billboard truck Oakley paid to use. Crenshaw's business's phone number is displayed on the vehicle. He said he's received nearly 200 phone calls because of the vaccination message on the truck.

"(Oakley) told me that it might cause some attention. I was like, "You know, as long as it doesn't go against our morals as a company then we're fine," and I knew the underlying messages of it that he was trying to get so we were good to go with it," said Crenshaw.

Oakley said he and his team are proud of the billboard and he hopes it will ultimately lead to more people getting vaccinated against COVID-19.

"I think any advertisement that is provocative is going to create a dialogue and when you get people talking, people have action and I'm hoping that the action is people will get the shot because of this," he remarked to WBTV. 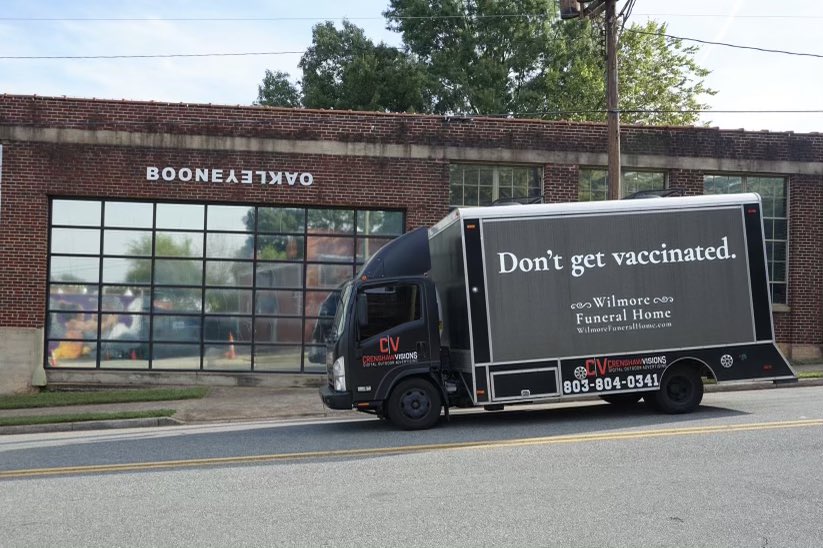 That could go either way..

Cute...but many Americans are on to your bullsh*t.

They wanna be viral? Maybe their phone and email inbox should go viral.

Everybody is gonna die—the only question is will they die on their feet or on their knees.

Bet their emails are burning... I sent one to the F’ers

When trying to be clever backfires.

Too clever by half......One often sees crap like this generating opposite the intended effect.

I love it, hilarious...and truth.

Epic fail, for an advertising agency.

Nothing will beat Ferryman funeral homes.

So basically the narrative is get vaccinated and live or get Covid and die. That’s it. There are no other choices, no other options. according to the Covididiots.

I am flabbergasted at how quickly this country has turned into just stupid! No critical thinking skills, no research, just people trusting government 110%. What is wrong with Peoples brains?

that was my thought too

I think my expiration date is due soon, because I didn't get vaccinated. 🙂

Less Than $803 To Go!!
Even George Would Be Shocked
To Find Some FReepers
Haven't Donated To FR This Quarter!
Every Dollar Helps!!