Voters in Oregon’s Harney County will be asked in November to decide on a “Greater Idaho” proposal, potentially allowing the county and several others in Oregon to join the neighboring state, according to a group that has collected signatures in support of the initiative.

Citizens for Greater Idaho’s website said on July 19 that the group has obtained enough signatures.

The group said the proposal would “extend Idaho’s jurisdiction over rural, conservative counties of eastern and southern Oregon” and are also “intended to put pressure on the state legislatures of Oregon and Idaho to negotiate an interstate compact to relocate their common border.”

“Idaho’s government would defend us from the radical Left’s cultural revolution and preserve our way of life—Oregon’s government wouldn’t,” said Mike McCarter, president of Move Oregon’s Border and Citizens for Greater Idaho, in a statement. “We may be able to convince northwestern Oregon to let eastern and southern Oregon counties go.”

Most voters in Oregon live in the northwestern part of the state, which includes heavily Democratic Portland, McCarter said in an interview with television station KTVZ.

Voters in seven other Oregon counties, he said, have already voted in favor of their county leaders meeting twice per year to discuss the “Greater Idaho” proposal.

Some experts noted that the concept is a long shot, as it would require the approval of the Democrat-led state legislature as well as the Democrat-controlled U.S. Congress. 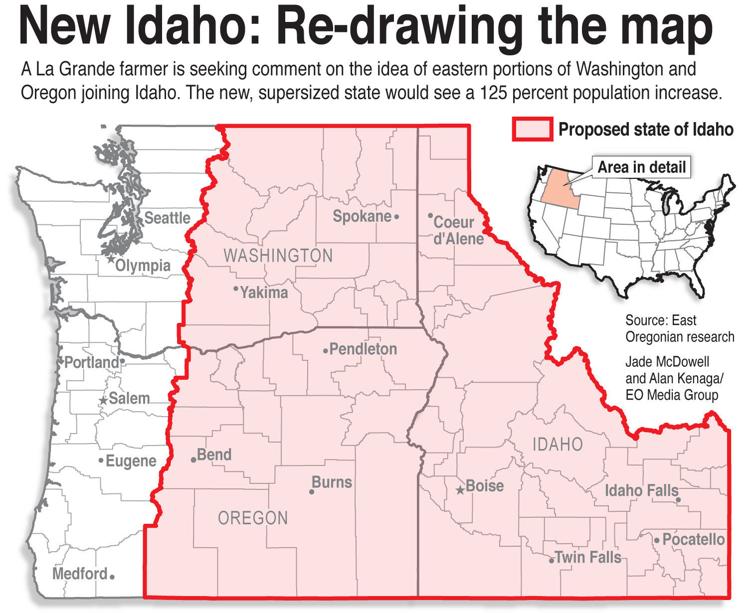 The constitution is very clear. No portion of a state may be used to secede to form a new state or join an existing state without the consent of the state legislature and Congress. Not going to happen.

*The constitution is very clear. No portion of a state may be used to secede to form a new state or join an existing state without the consent of the state legislature and Congress. Not going to happen.*

Agreed. I do find it interesting that the United States is always preaching the right of self-determination to other countries. But no way is it allowed here.

Time to move to Orexit.

Just move to Idaho. These movements are just a waste of time

“The constitution is very clear. No portion of a state may be used to secede to form a new state or join an existing state without the consent of the state legislature and Congress. Not going to happen.”

Tell that to West Virginia.

11 posted on 07/21/2021 8:52:33 PM PDT by oldbill
[ Post Reply | Private Reply | To 4 | View Replies]
To: DownInFlames; Leaning Right
The constitution is very clear. No portion of a state may be used to secede to form a new state or join an existing state without the consent of the state legislature and Congress. Not going to happen.

That's not what it says. Here's the text:

New States may be admitted by the Congress into this Union; but no new State shall be formed or erected within the Jurisdiction of any other State; nor any State be formed by the Junction of two or more States, or Parts of States, without the Consent of the Legislatures of the States concerned as well as of the Congress.

So without the consent of Congress and the sate legislature(s) involved...

It doesn't say that one existing state can't cede territory to another. It stands to reason the consent of both legislatures would be needed, but it doesn't look like Congress gets a say.

These secession movements are silly on both sides.

The problem will solve it self, if we just let nature and economics run its course.

The states of both Oregon and Washington are geological “gold mines” in natural resources. The rural counties in both states have been undervalued and underutilized since the late 1960’s & early 1970’s. The reasons are many and complex.

Both states hit peak urbanization around the late 1990’s or early 2000’s. Peak urbanization is when a large city can no longer grow within a natural organic supply chain. Supply chains move people, goods, and services where they’re needed, not only globally but locally.

When urbanized areas become expensive inflated bubbles of consumerism and non productive fat. The blob of fat eventually gets introduced to a diet. An economic diet.
When capital finds a better return it will leave and find new growth, regardless of politics or sentimentality.

Bill Gates is one of the wealthiest capitalist in world history. He is one of the familiar faces in the technology sector. A tech sector that has helped drive wealth & innovation through the stratosphere.

Yet Gates is investing in farm land at this very moment. He wouldn’t be doing it, if he thought it was a losing long term investment.

The Federal government wouldn’t need a Grant or a Sherman either. The government would just cut off Social Security and Medicare payments to rebellious areas, until they folded.

Same thing underway in parts of B.C. that want to be in Alberta instead of B.C. — same roadblocks in their way.

If they could grab a bit of Wyoming and Nevada then Wydahowagonevada comes into view.

This is rather like a very speculative idea I had earlier about some part of the U.S. declaring itself independent and “the real America” trying to rebuild the country back one county at a time once a suitable hard core base was created, and I imagined that hard core base might be states like Utah, Idaho, Nevada (except for Las Vegas possibly) and eastern Oregon, eastern Washington, Wyoming and Montana. plus some of the plains states.

It may be the only way to fix the trainwreck because the crazies have the demographics, part of the problem is that so many people all jammed in together tend to get crazy and stupid, other than Vienna in the late 18th century it’s hard to think of a city that didn’t quickly become crazy and stupid in a highly organized way.

Even kommifornian conservatives still act like liberal fools. Just because someone is pro 2nd amendment doesn't make them conservative.

The libertarian retards that post on FR are proof of that.

This is backwards. Some Idaho counties should join Washington and Oregon and turn both of those states red.

But it should. The more it is talked about the better the idea sounds. That is how change happens.

Freedom is never a waste of time.

"Rebellious" areas also can collect taxes and distribute them funds too. GET IT???? What kind of idiot thinks if a group of state secede that the citizens are going to keep sending taxes to DC? Are you daft?