President Joe Biden on Feb. 14 urged Congress to strengthen existing laws concerning gun ownership on the third anniversary of the mass shooting at a high school in Parkland, Florida.

“The Parkland students and so many other young people across the country who have experienced gun violence are carrying forward the history of the American journey. It is a history written by young people in each generation who challenged prevailing dogma to demand a simple truth: we can do better. And we will,” Biden said in a statement.

“This Administration will not wait for the next mass shooting to heed that call. We will take action to end our epidemic of gun violence and make our schools and communities safer. Today, I am calling on Congress to enact commonsense gun law reforms, including requiring background checks on all gun sales, banning assault weapons and high-capacity magazines, and eliminating immunity for gun manufacturers who knowingly put weapons of war on our streets.”

In the afternoon of Feb. 14, 2018, a man identified by authorities as Nikolas Cruz, now 22, walked into Marjory Stoneman Douglas High School in Parkland and opened fire with an AR-15 rifle. The shooting left 17 dead, including 14 students. Cruz, who is currently awaiting trial, could face the death penalty.

After the shooting, a number of Parkland students and parents began agitating for stricter gun control laws, arguing that Cruz shouldn’t have been able to obtain a gun. But others pointed to failures by law enforcement, including safety officer Scot Peterson, who has pleaded not guilty to criminal charges for not entering the school building to confront Cruz, and urged restraint on new measures.

Meanwhile the Capitol is protected by people with assault weapons........

If the feckless police had done their jobs including but not limited to enforcing existing law even at a bare minimum, this would have never happened.

6 posted on 02/14/2021 5:54:42 PM PST by traderrob6
[ Post Reply | Private Reply | To 1 | View Replies]
To: Tolerance Sucks Rocks
It won't make it out of any Congressional committee. If Biden wanted gun control so bad, he'd do an EO or issue onerous regulations through the ATF. The fact that he's calling on Congress to do "something" is a tell. This is nothing more than a fundraising optic for the kook leftist base, and to portray Republicans as "fighting against" gun control.

Even POS RINOs like Romney, Collins, and Murkowski aren't going to vote for Biden's gun control.

Can you say Chicago where daily shootings is a way of life.

As soon as they go to Chicago and a few other blue cities and collect all the illegal guns I might listen. NOT

President Le Petomane says whatever his handlers put in his ear.

Dems are going to have to double the number of illegal votes the next time if potato head pushes this.

Take out a sheet of paper and a pencil and write a comprehensive definition of “weapons of war”.

You won’t be able to do it.

"If ye love wealth better than liberty, the tranquility of servitude better than the animating contest of freedom, go home from us in peace. We ask not your counsels or your arms. Crouch down and lick the hands which feed you. May your chains set lightly upon you, and may posterity forget that you were our countrymen.

Among the natural rights of the colonists are these: first, a right to life; secondly, to liberty; thirdly to property; together with the right to support and defend them in the best manner they can.

The liberties of our country, the freedom of our civil Constitution, are worth defending at all hazards; and it is our duty to defend them against all attacks. We have received them as a fair inheritance from our worthy ancestors: they purchased them for us with toil and danger and expense of treasure and blood, and transmitted them to us with care and diligence. It will bring an everlasting mark of infamy on the present generation, enlightened as it is, if we should suffer them to be wrested from us by violence without a struggle, or to be cheated out of them by the artifices of false and designing men." 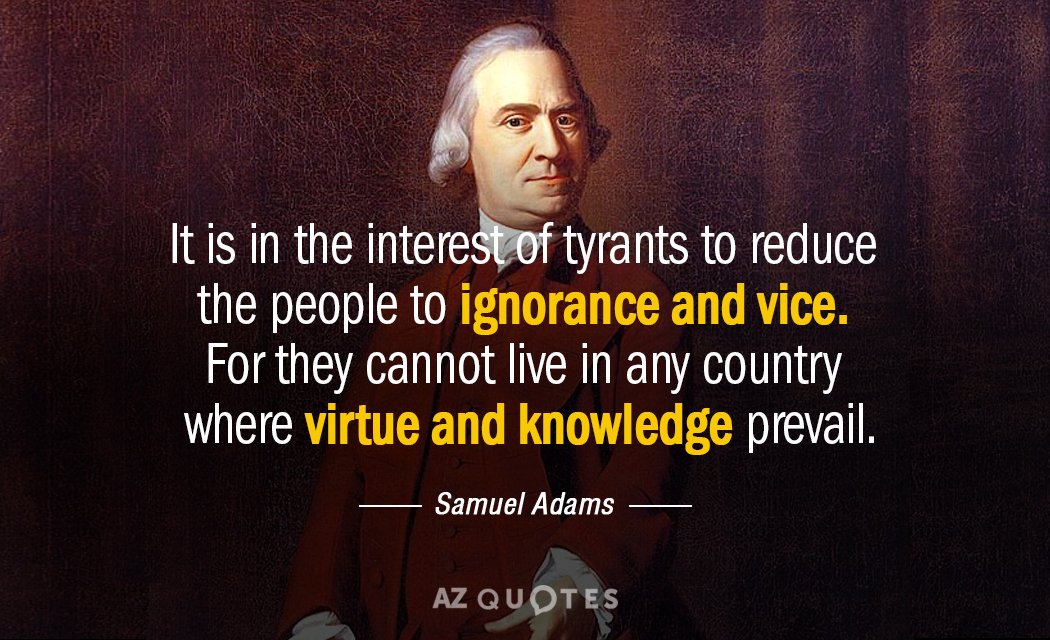 18 posted on 02/14/2021 6:10:03 PM PST by hardspunned (Former GOP globalist stooge.)
[ Post Reply | Private Reply | To 7 | View Replies]
To: All
It is very instructive that the bereaved Broward parents of slaughtered victims are the ones literally forced to lead the search for justice.

The Broward PTB chickened out.

<><> The $800 million Broward police force some 5000-strong did NOTHING.
<><> Democrap Cong Debbie Wasserman Scultz is a Broward resident

An investigation showed the on-site officer:
<><> refused to investigate where the gunshots were

An investigation showed the on-site officer:
<><> refused to investigate where the gunshots were coming from,
<><> retreated during the gunfire as victims were being shot,
<><> directed other law enforcement who arrived on scene to remain 500 feet away from the building.

As well. the gonad-lite mega-paid Supt Runcie (Obama's stupid pick)
did THE VERY LEAST he could do in the wake of the massacres. He needs to be unceremoniously ousted.

Supt Runcie alerted School Board members of the departure of human resources' Nichols, head since 2015 who ignorantly
overruled the firing of a school security guard found sexually harassing students, including one of the murdered students.

Runcie is a stupid excuse for a $400,000 Supt..... doesnt understand IT IS HIS JOB to know these things and TO DO SOMETHING ABOUT IT. 6/26 Florida sheriff fires 2 more deputies over Parkland response UPI ^ | June 26, 2019 | By Clyde Hughes Posted on 6/26/2019, 5:11:01 PM by Red Badger June 26 (UPI) -- South Florida investigators said Wednesday two more deputies have lost their jobs over the response to the 2018 shooting attack at Marjory Stoneman Douglas High School in Parkland. In briefing reporters on an internal report, Broward County Sheriff Gregory Tony said deputies Edward Eason and Josh Stambaugh were fired Tuesday for "neglect of duty." He did not detail their actions or why they were dismissed, however. Their terminations raised the total number of officers fired over the shooting to four. Tony said three other deputies who were also investigated were not disciplined. "As we conclude this final chapter ... in terms of this internal affairs investigation, we are now going to continue to move forward with fixing the issues that exist herein the agency in relation to training," he said. Scot Peterson, the school's resource officer who was heavily criticized for his reluctance to enter the building during the gunfire on Feb. 14, 2018, and Sgt. Brian Miller, a first responder who hid behind his car, were previously terminated. Former MSD student Nikolas Cruz killed 17 people in the assault. Deputies Brian Goolsby, Michael Kratz and Arthur Perry were cleared in the investigation. Florida Gov. Ron DeSantis fired Broward County Sheriff Scott Israel in January over the department's handling of the attack and named Tony, a former Coral Springs police sergeant, to replace him. ////Gov De Santis is doing a yeoman's job, picking off those responsible for the Broward massacre,
as gunfire resonated, kids screamed and called for help....and nobody came to help them.
<><> Gov DeSantis tossed out the imbecile Sheriff,
<><> and a passel of charges are pending against the cowardly officer who did nothing while kids were slaughtered.

Still a few to go such as the Broward moron hand-picked by Obama from Chicago.
Supt Runcie did THE VERY LEAST he could do as kids were massacred. He needs to be unceremoniously ousted.

AND THIS---Happy Days pic of the imbecile Sheriff Israel (now ousted)
with Cong Debbie W/S...........she is a Broward resident.

<><> What part did D/W/S play in securing the $58 million bribes, er, I mean tax dollars Obama showered on Broward for keeping minorities off the arrest roles?

Thus demonstrating how one can swear to uphold and defend the Constitution on the one hand, and wipe the ass with it on the other.