DUBAI - Thousands of Muslims, from Pakistan to Lebanon to the Palestinian territories, poured out of prayer services to join anti-France protests on Friday, as the French president’s vow to protect the right to caricature the Prophet Muhammad continues to roil the Muslim world.

Demonstrations in Pakistan’s capital Islamabad turned violent as some 2,000 people who tried to march toward the French Embassy were pushed back by police firing tear gas and beating protesters with batons. Crowds of Islamist activists hanged an effigy of French President Emmanuel Macron from a highway overpass after pounding it furiously with their shoes. Several demonstrators were wounded in clashes with police and authorities deployed more security forces to protect the embassy.

In Pakistan’s eastern city of Lahore, thousands of worshippers celebrating the Mawlid, the birthday of the Prophet Muhammad, took to the streets, chanting anti-France slogans, raising banners and clogging major roads en route to a Sufi shrine. In Multan, a city in Pakistan’s eastern Punjab province, thousands more burned an effigy of Macron and demanded that Pakistan sever ties with France and boycott French goods. 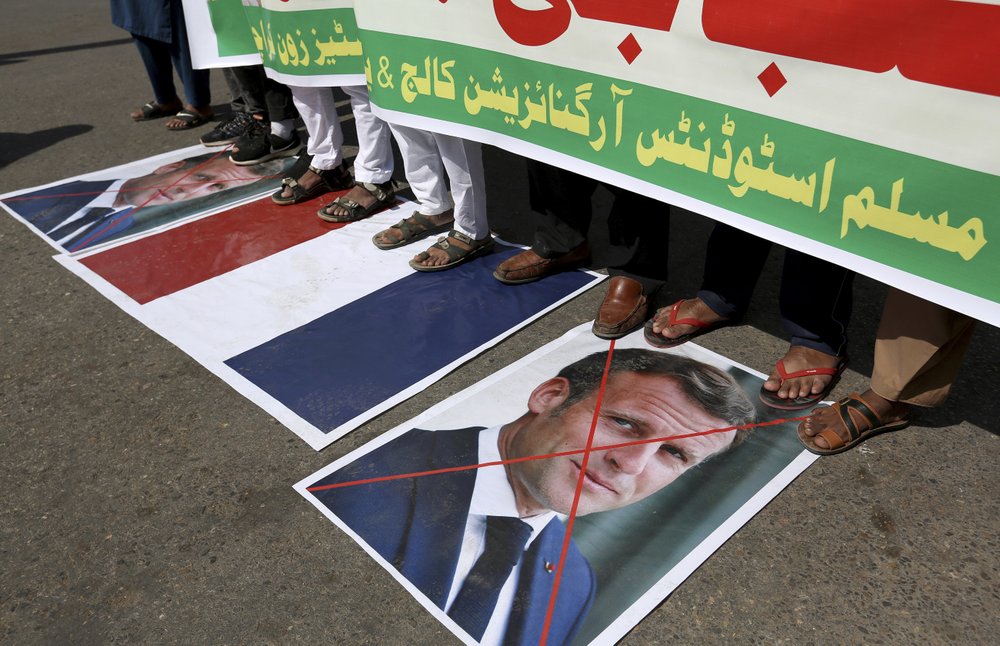 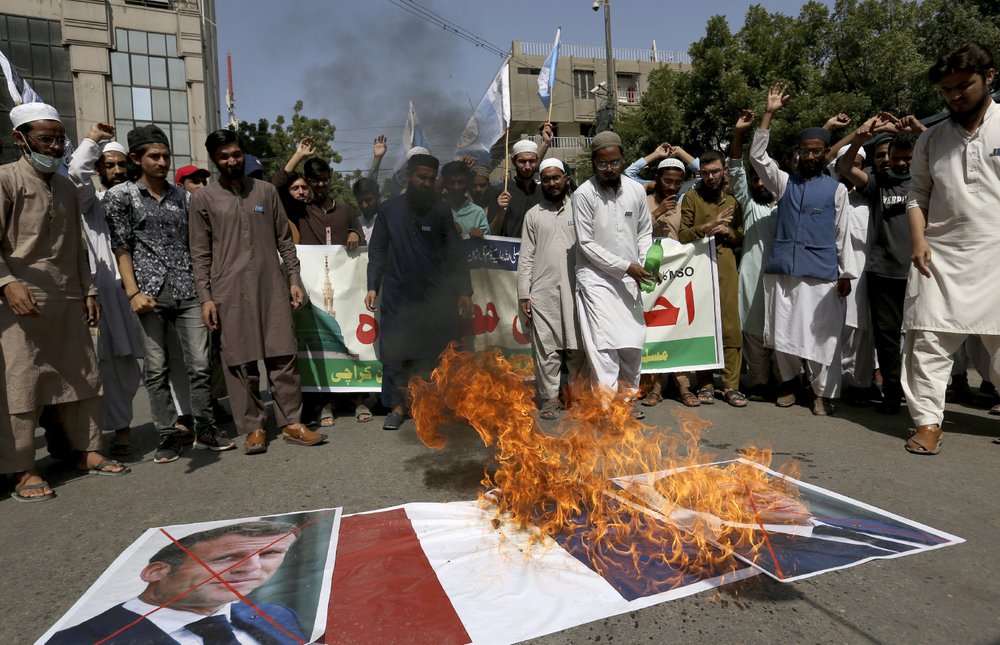 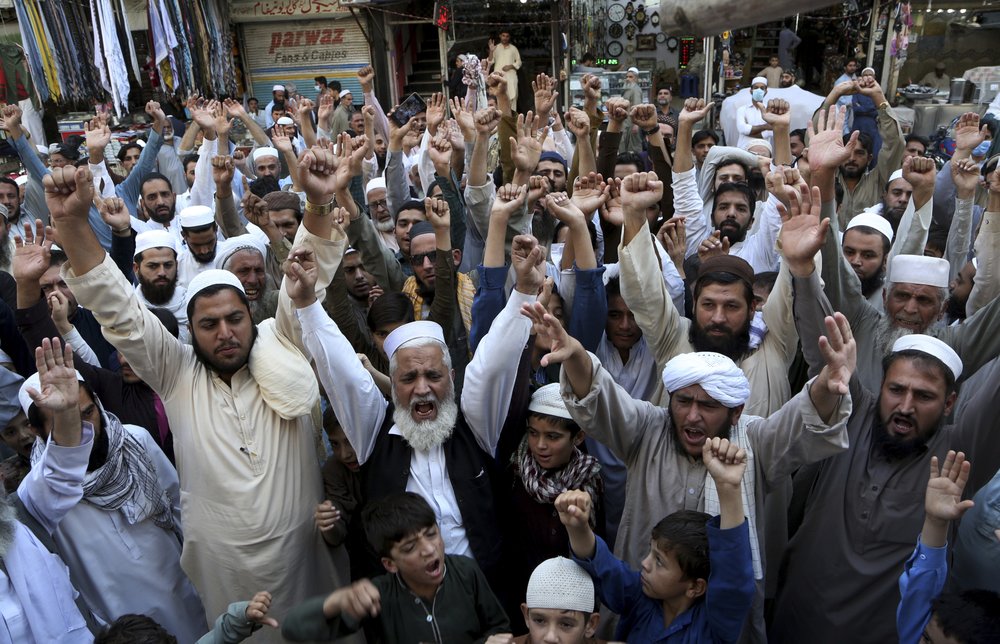 Europe needs another Battle of Tours or Vienna to deal with this.

Soy boy Macron is going to have to grow a set. Right.

Erdogan has every Muslim in Europe at his disposal.

Where’s Hussein Obama when you need him, to ask the French to subjugate themselves.

True. Not sure how many Europeans would fight for their homeland right now.

Europe ispresently genetically inferior to the Islamist Invaders. The warriors, the fighters, the strong were eliminated in the 20th century.

Hitler wished that Germany was Muslim, because the religion rewards soldiers who fall in battle, unlike “flabby” Christianity. He said had Germany converted to Islam, they would have dominated the world.

“Islam, the Religion of Peace”

(when was the last time you saw Christians rioting like that when, e.g., somebody put a Jesus statue in a jar of urine, etc ...)

And here he is with one of his biggest allies-----who happens to sit in the US Congress. 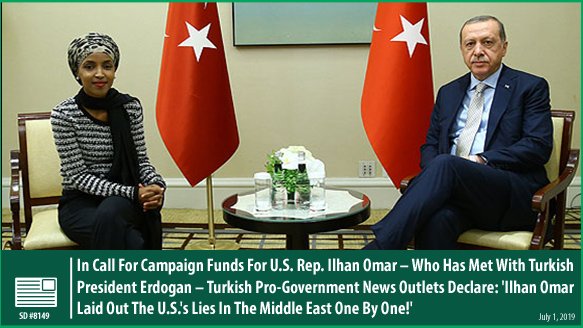 Her foray into foreign politics should have disqualified her from a US office.

And how did she get security clearance----did she falsify official US govt papers?

There is a huge, basic incompatibility between Western culture and Islam. Wester culture is accepting of any other culture. Islam is not. To adherents of Islam there is only one way; or, they kill you. If Western culture is to survive intact, it must either convert Muslims to other religions, or, kill them. Neither is something Western culture, especially the French, is willing to do. So, the West will continue to bleed until it either dies or kills/converts Islamists. When will Western culture reach that tipping point? Probably after millions of Western innocents die. Not a moment before then.

The bearded savages wake up angry. They are trained to react with violence at the smallest slight. They are incapable of living in a civilized country.

Trump did the right thing, and I wish he could have done more to keep all of the bearded ones out.

In general, anything that angers a muslim or a leftist/liberal/democrat is ok in my book. :-) I don’t even care if the cartoons are well drawn or funny.

Lacy Johnson, the Republican challenger to Rep. Ilhan Omar (D-Minn), complains that “Rep. Omar has been dodging all of my requests to engage in a debate to help voters view both candidates answering questions about the policies they support and how they will affect Minnesotans.

She is one of only two holdouts among the state’s eight-member congressional delegation—both of them Democrats—who have refused to participate in a debate.”

Omar brushed off Johnson’s complaint, calling it “the mewling whining of a loser. The fact is that our campaign has discovered that debates are an inefficient method for interacting with voters.”

“We have found that a simple offer of cash in exchange for each vote bypasses the meaningless chit-chat that occurs in debates and gives voters a real and more substantial reason to support my reelection.”

In late September Project Veritas released an undercover video showing a ballot harvester for Omar’s campaign offering $200 to a voter in exchange for his absentee ballot. The ballot harvester explained that “the honest purchase of votes is very popular among the thousands of Somali immigrants in Rep. Omar’s district.”

He went on to justify the clearly illegal scheme on the grounds that “reelecting Rep. Omar is our only defense against Jews taking over the world.”

I watched the movie ‘Fury’ recently. Thought it was good. One deeper point of the movie was how committed the SS was to killing us and getting that point home to new soldiers being called up to the front. We need to be thinking now about decisions we may need to make, just like our forefathers did.

mohammedum terrorists
have carried out
more than
38006
deadly terror attacks
since 9/11.

Add to this that it also applies to the different versions of Islam. Sunni Islam and Shi'a Islam are, throughout history, antagonistic and even deadly towards the other.

However they both have the doctrine that there is no backing out of Islam, either individually or geographically. To renounce Islam to become a believer in any other religion is a death penalty in many Islamic-controlled countries. Geographically, if Islam has ever conquered a place, it is a religious dogma that it is theirs forever. Thus Islamic clerics demand that Spain return to Islam, amongst other places.

Finally, for this posting, there is this absolute status demanded by Islamic believers, that the entire world must subjugate to Islam even when practicing other beliefs. It is not just these cartoons in France, any media or speech that denigates or criticizes Islam is blasphemy and punishable by death.