He sure seems like a nice guy, doesn’t he? That Joe Biden, with his unnaturally white-capped smile so wide you can see his wisdom teeth and his “awe, shucks” kind of way of running for president as just your average Joe. “Middle-class Joe” and “lunch bucket Joe” are just a couple of the names senators used to call him as a way of picking on him for being so naturally blue collar he’d sometimes show up to work with a naked torso and a tie, not realizing he wasn’t wearing a blue shirt. Everybody loves Joe, just ask him.

Of course, none of that is true. His smile is forced, his teeth are eerily fake. He may have been blue collar for a couple of years during his childhood, but as an adult he’s never held a job he had to shower from, only for. And no one, NO ONE EVER, called him either “middle-class Joe” or “lunch bucket Joe,” except himself.

Joe Biden’s life story has been carefully constructed by him to paint him as a sort of folk hero; an everyman who made good. He’s a Forrest Gump, of sorts, who inserts himself retroactively in whatever was happening in the past, once it was determined to have mattered and to be useful to him going forward.

Despite a long history of talking about his participation in the Civil Rights Movement, he never had anything to do with it. He didn’t march, he didn’t protest, he didn’t do anything. Eventually, his lies caught up with him and he admitted as much, then shifted his hero story to him fighting for civil rights in the Senate. Of course, there weren’t any major civil rights fights during his tenure in the Senate, and his biggest accomplishment as a Senator resulted in incarcerating more young black men for extended periods of time over minor drug offenses than anything since the days of the Democrat-controlled segregated south. That wasn’t Joe’s only brush with lies designed to appeal to black voters. Biden told voters on February 11th, “This day, 30 years ago, Nelson Mandela walked out of prison and entered into discussions about apartheid. I had the great honor of meeting him. I had the great honor of being arrested with our U.N. ambassador on the streets of Soweto trying to get to see him on Robbens Island.”

Couple of things about this. First, it’s Robben Island, not Robbens. That’s minor, but shows how loose he can be when on a roll of lies. He wasn’t arrested, he was detained very briefly, not on the streets Soweto but at the airport. He wasn’t with the U.N. Ambassador, but other members of Congress.

But the oddest part of all of it is a simple question: why was he in Soweto if he was trying to see Mandela on Robben Island? Soweto is almost as far away from Robben Island as you can get and still be in South Africa. It’s almost 900 miles away. Why, if he was “trying to get to see” Mandela in prison, wouldn’t he fly to Cape Town, the country’s capital and where the island actually is?

So much of Joe Biden’s life doesn’t hold up to basic scrutiny. Not because it didn’t happen – he was alive and the Civil Rights Movement happened, he just wasn’t part of it, and he did travel to South Africa in the '70s – but because whatever really happened wasn’t good enough for his purposes, it didn’t make him out to somehow be a hero.

In 1987, Biden told a voter who’d asked about his academic record during his first run for president, “I think I probably have a much higher IQ than you do, I suspect. I went to law school on a full academic scholarship, the only one in my -- in my class that have a full academic scholarship. In the first year in law school I decided didn’t want to be in law school and ended up in the bottom two-thirds of my class, and then decided I wanted to stay, went back to law school, and in fact ended up in the top half of my class. I won the international moot-court competition. I was the outstanding student in the political science department at the end of my year. I graduated with three degrees from undergraduate school and 165 credits — I only needed 123 credits. And I'd be delighted to sit down and compare my IQ to yours if you'd like.” It was all captured on video, and everything he said was a lie.

For example, Joe’s scholarship was based on need, not academics (and it was only a half scholarship), and he graduated 76th out of 85 in his class. Everything he said was a lie.

It can’t be that he misremembered so many parts of his own life and every aspect of his college career, and how he misremembered the details uniformly made his sound impressive when he was not. Everyone is the hero of their own story, but there comes a point when you simply have to admit when someone is full of it, and Joe Biden most definitely is full of…it.

He just “says stuff”. I don’t think the concept of Truth really registers with the guy. He wants to persuade people or manipulate people and he doesn’t care how he does it.

Self praise is a laxative, don’t $hit yourself Joe.

Grifters will natter on while watching the mark. When something resonates, they cycle back to it and elaborate. Rinse & repeat.

He is is his own long con. And it paid off well, too. Now, he’s past his sell-by date and the family can’t let go the of the grift.

Joe Biden was pulled out of the bottom of the Dem Presidential primary discard heap and elevated to Soetoro’s Veep, after Joe’s son, Beau, bailed Barry out of an embarrassing situation with an unsavory fella named Larry Sinclair. Beau used phony charges to extradite Larry from center stage at a Wash DC press conference to Delaware, but not before exposing Barry with crack cocaine and gay-sex scandal. Beau then had to release Larry soon after based on the nonsensical charges.

Comma-La was pulled out of the bottom of the Dem Presidential primary race without securing even one delegate. Comma-La was roundly rejected by her own party.

She is from a state that Joe does not need. She is a “magical” woman of color who has never really “down wid duh shrtuggah” and equally as magical as Barry. Born from a high caste Indian mother and an elite Jamaican father with slave-owner genealogy, to paraphrase Joe, “she ain’t black”.

So, we have a party reject at the top of the current Dem ticket and a Veep running mate who is also a dismal Dem party reject. Joe dragged Comma-La from the Dem reject pile to make her the Veep nominee, and the heir apparent after Joe’s mind finally goes into vapor lock.

Joe's son Hunter before and after the unnaturally white-capped crackhead smile...

I'm glad the author suffixed with "of sorts", otherwise it would be an insult to Forrest. We all know Forrest is about twice as smart as Biden.

Joe Biden Is The Hero of His Own Story.

A legend in his own mind. What an asshole. 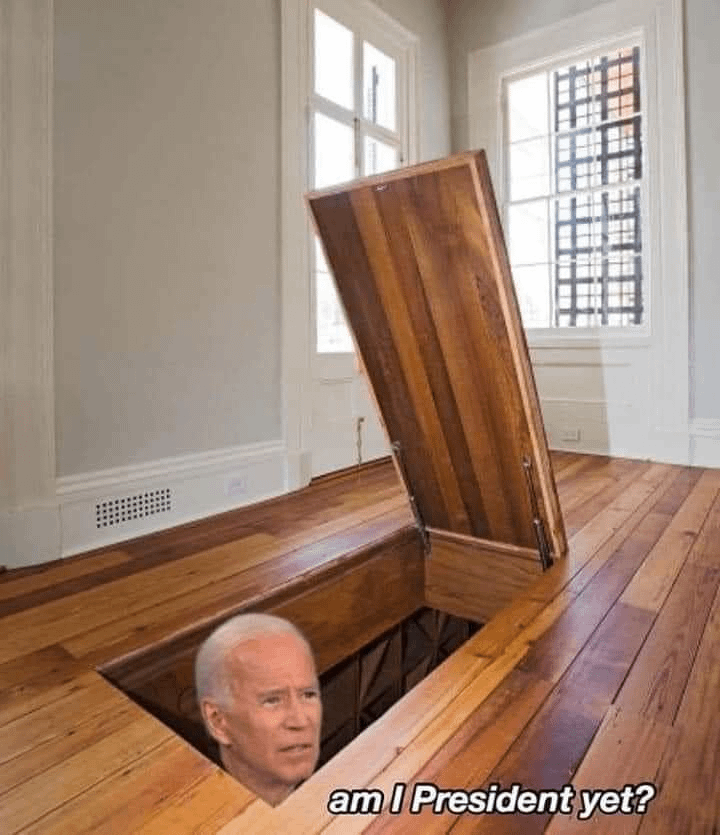 “I’m Joe Biden and I lied about this message”

Joe Biden got plenty of votes by becoming a "victim", asserting his family was hit by a “drunk driver”, but the trucker was not even ticketed.

Still unanswered is why family man Joe Biden did not accompany his wife and children that fateful night,
on a usually joyous family excursion to buy a Christmas tree. Did he have a hot date?

Joe says his second wife Jill was the baby-sitter......but that's another Joe con-----he's also said he met Jill on a blind date.

Jill's ex-husband stepped forward to say: he and his then-wife, Jill, were Biden's campaign workers......
then he found out about their affair when the garage man told him they had a fender-bender in his car.