Big media’s divergent handling of the Steele dossier and the Hunter Biden email stories proves that the corrupt press is not just the enemy of the people, but the enemy of truth, freedom, and our constitutional republic.

For nearly four years, big media peddled Russia collusion as reality-based and the Christopher Steele “dossier” it rested upon as “mostly verified” or “fake but accurate.” Relying on unnamed sources, inuendo, and illegal leaks, the press played a constant refrain of Russia, Russia, Russia, while promising a smoking gun would soon emerge from Robert Mueller’s special counsel investigation.

At the same time, when the Republican head of the House Intelligence Committee at the time, Devin Nunes, released a memorandum detailing the abuse of the Foreign Intelligence Surveillance Act court as part of the Russia collusion “investigation,” the media portrayed the memo as resting on “shaky grounds” and designed solely to undermine the special counsel investigation, which itself was launched as a result of a leak from former FBI Director James Comey.

Conversely, when Democrats like Rep. Adam Schiff, D-Calif., lied to the American public about Russia collusion, the media portrayed his assertions as infallible. Even Inspector General Michael Horowitz’s report on FISA abuse did not compel corporate media to change course.

To this day, the majority of Americans likely have no idea that “Spygate” actually occurred. Heck, just two months ago, CNN’s Jim Acosta displayed his ignorance of the facts, responding to Trump’s complaints that the Obama administration had spied on his campaign. “That is just not true. That did not happen, it has not been proven,” Acosta intoned on TV.

Yes, Jim, it has been proven true.

While U.S. Attorney John Durham’s investigation into the entire Russian collusion hoax remains ongoing, much more Democrat malfeasance has already been proven true as well. The average American might not know it, though, given the corrupt mainstream press’s penchant for putting a lid on news that proves Trump was right.

When news broke that Steele’s primary sub-source had been investigated for being a Russian agent, there was scant mention of the development, even though it suggested the Steele dossier Democrats used might have been Russian disinformation. CIA Director John Brennan briefed then-President Obama on Russian intelligence claiming that on July 28, 2016, Hillary Clinton approved vilifying Trump by claiming Russian interference in the election. That major story was likewise a news blip in the election-year cycle.

In short, corporate media ignored, downplayed, or spun the biggest, most widespread political scandal in our country’s history, involving the Obama-Biden administration’s spying on a political enemy, with Russian-provided fake intelligence bought and paid for by Clinton and the Democratic National Committee.

Now, big media is ignoring, downplaying, or spinning evidence suggesting the second biggest political-corruption scandal in our country’s history. They are ignoring evidence that former Vice President Biden knowingly helped his son Hunter, and Hunter’s “business” partners, sell access and influence to foreign officials and businesses, and possibly received a kick-back of the payouts.

The evidence of the Bidens’ corruption comes not from unverified and unnamed sources, but from emails and texts recovered from a laptop left at a Delaware computer store, and emails provided by Hunter’s former business partner. The corporate press, however, pretends those emails and texts can’t be relied upon because they haven’t personally verified them. But others have. In addition, salacious videos and photographs of Hunter Biden have been recovered from the laptop, providing excellent evidence of its authenticity.

Hunter and Joe Biden also have not disputed the emails’ validity—something very easy to do. Secret Service records have also corroborated many of the travel details included in the emails.

While the evidence overwhelmingly confirms the authenticity of the emails and text messages, the fake news instead runs with intelligence official-rejected claims that the corruption scandal is Russian disinformation, pushed by none other than Russia-collusion clown Schiff! Not only is there no evidence the emails and text messages are “Russian disinformation,” Director of National Intelligence John Ratcliffe—who, unlike Schiff, has access to the actual intelligence—has stated unequivocally that “the laptop is not part of a Russian disinformation campaign targeting Democratic presidential nominee Joe Biden.” FBI and Justice Department officials have also reportedly agreed with Ratcliffe’s assessment.

If the emails are authentic, as all the evidence to date indicates, then they cannot possibly be Russian disinformation. They must be truth. And that truth indicates corruption that pierces to the heart of our democratic republic: elected officials selling access to government decisionmakers to benefit their families and themselves.

While Joe Biden has repeatedly claimed to the public that he has never “discussed his son Hunter’s overseas business activity with Hunter ‘or with anyone else,’” emails indicate Hunter introduced his then-vice president father to a senior adviser to the Ukrainian company Burisma. At that very time, Burisma, which was under investigation in Ukraine for corruption, “was showering Hunter with upwards of $50,000 a month in excess compensation.”

The elder Biden also later bragged about causing Ukraine to fire the prosecutor investigating corruption at Burisma by threatening to withhold a billion dollars in loans unless he was axed. “Well, son of a b-tch. (Laughter.) He got fired,” Biden postscripted the incident at a public event.

The hard drive evidence goes even further, suggesting Hunter may have even served as the bag man for the political family: “A text recovered from the hard drive also suggests the former vice president may have received a cut of Hunter’s ‘earnings.’ ‘I Hope you all cal do what I did and pay for everything for this entire family Fro 30 years,’” a screenshot of a text from January 2019 to Hunter’s daughter read. “It’s really hard. But don’t worry unlike Pop I won’t make you give me half your salary.”

Other emails indicate Ukraine was not the only target of the family shakedown. “Subsequent reporting from the Post confirmed by Fox News later revealed that Chinese businessmen with deep ties to the Chinese Communist Party were offering Hunter Biden $10 million a year for ‘introductions alone.’” Again, a Hunter email indicates Joe Biden was to receive a share of the proceeds—here a 10 percent cut of the compensation package.

The evidence that Democratic presidential candidate Biden was complicit in his son’s pay-to-play scheme is solid, and the email and texts indicating the long-time politician received a cut of the proceeds even more damning. But corporate media doesn’t care. Biden is a means for them to dump Trump.

Ignoring this story goes beyond protecting corrupt politicians. Should Joe Biden win the election, U.S. national security is gravely at risk because he is clearly compromised. “Every country, every foreign politician or political faction, and every corrupt oligarch or business that paid for access has the emails, notes, receipts, itineraries, fund transfers, and maybe even photographs or recordings,” which is a fatal lever over our potential commander-in-chief.

If he becomes president, Joe Biden’s apparent corruption puts America and Americans at serious risk. If that happens, the fault will not merely lay at his feet, but at the door of every “journalist” who ignored the evidence to avoid a repeat of 2016’s election results.

Big media is linked with the “deep state.” Rather than seeing them as merely “biased” a closer comparison would be instead to see them linked as Pravda was linked to the Soviet government.

Besides voting President Trump in for four more years as well as getting the right people into the house and senate, we conservatives REALLY need to come up with a plan of attack to insure this is the very last presidential election the main stream media and big tech control the entire discourse and publication of information. We need news sources that reach real people EVERY day from a variety of mediums as well as the excellent podcasts, radio shows, tech accounts, and a few opinion news sources at Fox.

Big media are owned by the same oligarchs who own the rest of America and want to retain the status quo corruption. They need to be broken up with anti-trust lawsuits. They and big tech have a monopoly power that needs to be dismantled. The alternative will take us to totalitarianism in line with the CCP.

Just see who worked in the previous administrations and is now telling us what to think. Unbelievable! And don’t forget all the pay-off books, the untutored might believe the money was for real writing.

“The seriousness of the charges” has been a weapon/excuse/meme in the hands of the left even before Foley was brash enough to admit it was all they needed to dig into obviously absurd accusations against a Republican (the whole charge that Bush had flown to Paris in an SR71 to secretly meet with the Iranians too keep the hostages till after Reagan was in).

The obverse, that no charges are ever serious enough if they involve Democrats, is also a proven thing on the Left.

Hey, remember ‘16 and people bragging on video of personal knowledge of crimes by candidate Clinton, the DNC and the PACs they were colluding with? That resulted in two men getting fired and nothing else for the actual criminals?

Or what about Teddy Kennedy actually trying to collude with Soviets?

... huge book deals for Obama after huge contracts for texts...

You know, it’s just a thing.

Not even Weiner was a weiner that could get a Clinton in trouble.

But the books will be opened in the Lord’s time.

11 posted on 10/22/2020 10:02:41 AM PDT by Rurudyne (Standup Philosopher)
[ Post Reply | Private Reply | To 1 | View Replies]
To: Kaslin
Big media’s divergent handling of the Steele dossier and the Hunter Biden email stories proves that the corrupt press is not just the enemy of the people, but the enemy of truth, freedom, and our constitutional republic.

The Liberal Elite 'press' is the biggest loser...

We need accountability of government officials and bureaucrats. The fact that NO ONE is held accountable, no one is charged and we just keep piling up the facts. It seems we are finished as a country of law. That is lawlessness of Republicans are reported and sometimes brought to justice. Demoncrats not so much, well I should say never. Hillary, Hussein, Shitft Pelosi just keep skating. We are done if nothing happens soon. Can this be corrected in the next 4 years ???.

Wait. Are you just figuring this out? 100 years behind the times. But better late than never.

Time to declare war on them.

I mean that extremely literally.

We may look back on this era in American politics and culture and say that the media killed itself. The bias has always been there, but it achieved new extremes with Obama and just when you thought it could not get worse along comes Trump.

The irony is that they are so insulated within their bubble of group-think that they cannot even see it. They parrot the same DNC talking points and they have pretty much been wrong about every single major issue in the last 10 years. The people are not stupid, they see this clearly. 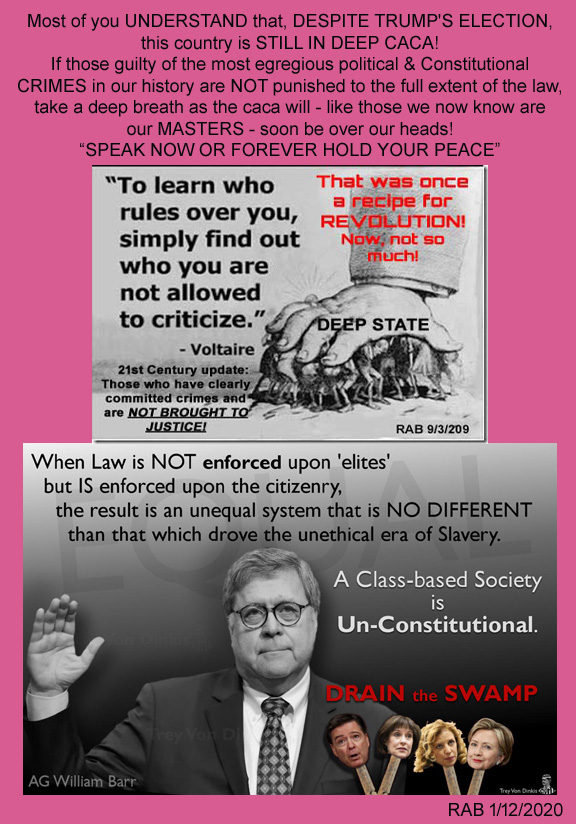 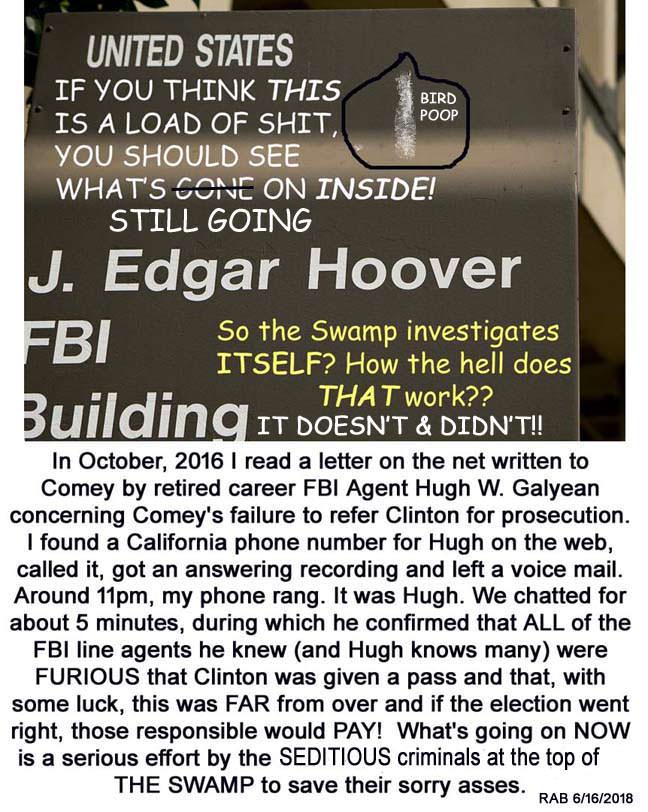