A silver casket was wheeled to the front of a Brooklyn nursing home Sunday — and 6,500 copies of the cover of Gov. Andrew Cuomo’s new book were dumped into it in protest of his COVID-19 policies.

The number of covers was equal to the roughly 6,500 people who have been reported killed by the coronavirus in nursing homes in the state — although the ralliers said they believe the figure is much higher.

“My mother-in-law got COVID in an elder-care facility but died in a hospital, [so] her number does not count’’ in New York’s nursing-home tally, said Janice Dean, a meteorologist for TV’s “Fox & Friends’’ who was among the roughly 50 protesters outside the Cobble Hill Health Center. 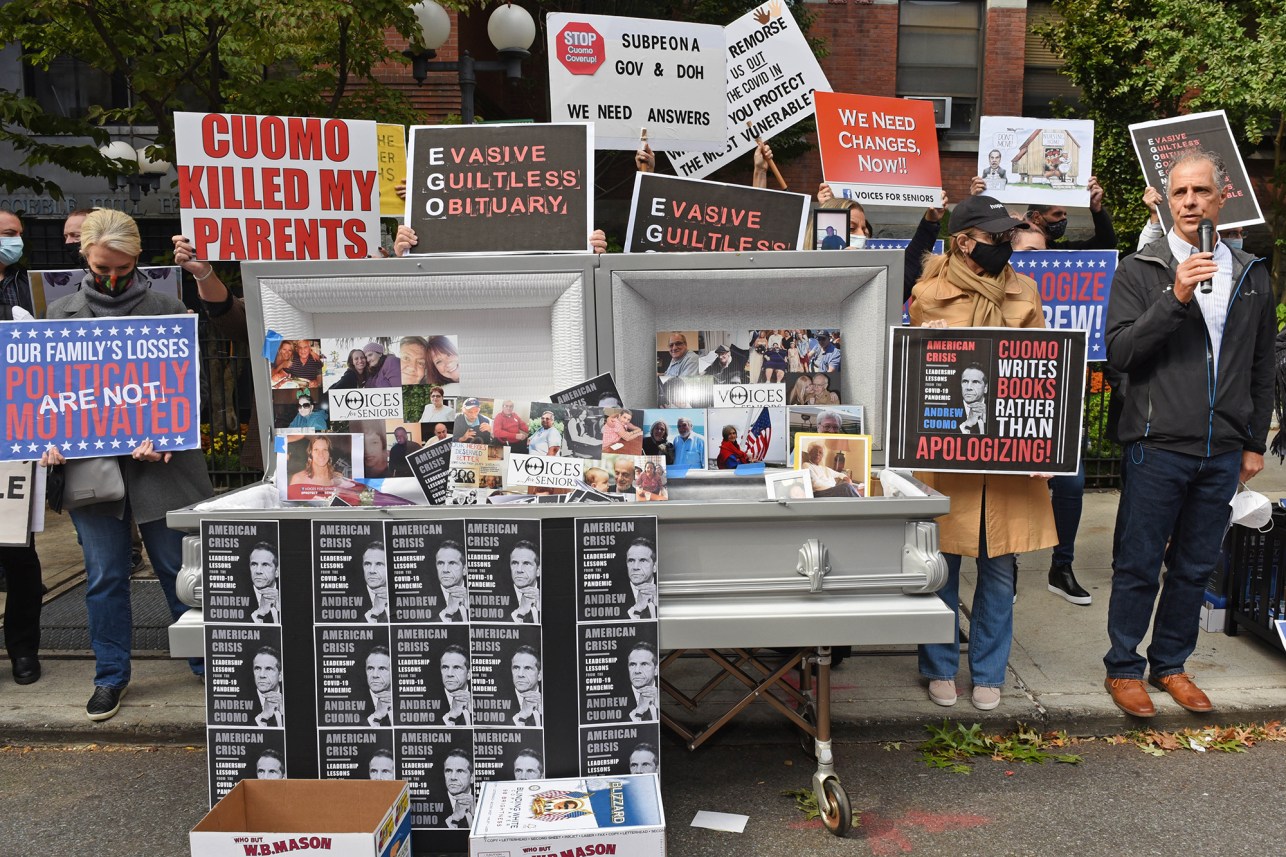 I live right over the bridge on Staten Island.

The next race is already obvious that the dem primary decides who will be next mayor.

Once there were enough sane people in the other four boroughs, along with Staten Island’s south shore and the Orthodox Jews in Brooklyn to put someone like Rudy over the top.

There are no longer enough sane people.

BUT Staten Islanders can turn out huge and get max rose the hell out of office!!

The brooklyn part of the district killed us last time

I think the worm has turned actually

It really comes down to this : America

Do you love this nation ? its principles ? the people ? the history the future;

I’m going to assume that you do

If you don’t . and you want a Marxist utopia !! Sunshine and rainbows and lollipopsi. - you want Venezuela ; if you want Cuba; if you want Soviet Russia orNorth Korea , please go ahead and vote D

As far as I can tell the only three. reasons Democrats are giving us to vote for them is 1- killing babies 2- Obamacare / government run healthcare and 3- climate change

Again if these are more important to you than.

Then go ahead and vote Democrat

Go ahead and vote Democrat

Now let’s look at those choices if you live in a place like New York City , which is very crowded , and thus depends heavily on people being able to get along. What do you think those New Yorkers are thinking

7 posted on 10/18/2020 12:54:52 PM PDT by Truthoverpower (The guv-mint you get is the Trump winning express ! Yea haw ! Trump Pence II! Save America again)
[ Post Reply | Private Reply | To 3 | View Replies]
To: AdmSmith; AnonymousConservative; Arthur Wildfire! March; Berosus; Bockscar; cardinal4; ColdOne; ...
8 posted on 10/18/2020 12:55:42 PM PDT by SunkenCiv (Imagine an imaginary menagerie manager imagining managing an imaginary menagerie.)
[ Post Reply | Private Reply | View Replies]
To: DFG
A female in-law flew back to NJ last week to finally have funeral services for her mother, who died in a nursing home after being sent back there from a hospital in the last week in April.

How low, would have been our real Covid 19 death rate? If these granny killing democrat governors had gotten the virus and died in the first week? Instead of them killing the innocent grannies!

Faces of PSYCHOPATHS. Exhibit A. I seriously hope they didn’t buy 6500 copies of that book. It would represent 97% of the total sales and probably make it nearly profitable.

It would only take a few books to cover the coffin I would think no more than 20!,,

Most people have no emotional connection to the Dow Jones, we need to reframe that part of the debate, something like, "Your union pension is heavily invested in the stock market, when Biden's policies crash the market, they'll crash your pension...."

It needs to be something a little less wordy, I'm open to suggestions...

That’s called a depraved indifference murder*. Except this is a mass murder.

*Under New York law, a defendant may be found guilty of depraved-indifference murder where, ‘[u]nder circumstances evincing a depraved indifference to human life, he recklessly engages in conduct which creates a grave risk of death to another person, and thereby causes the death of another person.’ N.Y. Penal Law § 125.25(2).

From the photo it looks like they are black and white photocopies. At a penny a piece, that’s $65.

I grew up in Kentucky and I remember wondering why Kentucky elected its Governor in May instead of in November like everybody else. The answer is that the primary elections are held in May, and for a long time in Kentucky you could be a liberal or a conservative, but you had to call yourself a Democrat in order to be elected to pretty much anything.

I grew up in Kentucky and I remember wondering why Kentucky elected its Governor in May instead of in November like everybody else. The answer is that the primary elections are held in May, and for a long time in Kentucky you could be a liberal or a conservative, but you had to call yourself a Democrat in order to be elected to pretty much anything.