Newly declassified handwritten notes from former CIA Director John Brennan show that the U.S. intelligence community knew in 2016 that Russian intelligence was actively monitoring, and potentially injecting disinformation into, Clinton’s anti-Trump collusion narrative. The intelligence concerning Russia’s knowledge of Clinton’s campaign plans was so concerning to Brennan and other national security officials that they personally informed Obama of the matter in the Oval Office in the summer of 2016. The handwritten notes from Brennan were declassified by Director of National Intelligence (DNI) John Ratcliffe and provided to Congress on Tuesday afternoon.

According to the declassified notes, Brennan and the U.S. intelligence community knew months prior to the 2016 election that the collusion smear was the result of a campaign operation hatched by the campaign of Democratic presidential candidate Hillary Clinton.

“We’re getting additional insight into Russian activites from [REDACTED],” Brennan’s handwritten notes state. “Cite alleged approval by Hillary Clinton–on 26 July–of a proposal from one of her foreign policy advisers to villify [sic] Donald Trump by stirring up a scandal claiming interference by the Russian security services.”

The notes appear to have been prepared by Brennan to memorialize a meeting held at the White House with the president and his top national security advisers. Included in Brennan’s notes are the responses of other participants in the briefing — including those of former White House National Security Adviser Susan Rice, former White House Chief of Staff Denis McDonough, and former DNI James Clapper, but those responses are redacted.

At one point, Obama asked whether there was any evidence of collaboration between the Trump campaign and Russia, but any response that may have been recorded in Brennan’s notes is redacted. Moreover, the CIA and other intelligence agencies also suspected early on that many of the key claims underpinning the collusion narrative could themselves be the product of deliberate Russian disinformation. Last week, Ratcliffe released a declassified memo, based in part on Brennan’s notes, noting that Russian intelligence was aware of the Clinton campaign’s plan, increasing the likelihood that it would be tainted by Russian disinformation.

While the Clinton campaign hired Christopher Steele, a foreign agent in the pocket of a sanctioned Russian oligarch, to concoct a dossier of allegations against Trump, the primary source of the most salacious and damning allegations of treasonous collusion came from a suspected Russian spy named Igor Danchenko. Last month, Attorney General William Barr informed Congress that the Federal Bureau of Investigation (FBI) was so concerned about Danchenko, who had been dubbed the “Primary Sub-Source” used by Clinton campaign sub-contractor Christopher Steele in his thoroughly debunked Steele dossier, that it had previously deemed him a national security threat and investigated him to determine if he was a Russian spy. The bureau called off the investigation once Danchenko left the United States and was no longer within the purview of the FBI’s domestic counterintelligence mission.

Although Democratic lawmakers have claimed, without evidence, that the latest declassifications are themselves the product of Russian disinformation, multiple senior intelligence officials told The Federalist that the CIA remains convinced that Russian intelligence sincerely believed as early as summer of 2016 that the Clinton campaign launched its anti-Trump collusion smear operation to distract from Clinton’s e-mail scandal. In October of 2017, the top lawyer for the Clinton campaign and the Democratic National Committee finally confessed publicly that he had personally hired the Democrat opposition research firm Fusion GPS, which paid Steele to peddle allegations that Trump was a secret Russian agent working on behalf of Vladimir Putin.

Ratcliffe also declassified on Tuesday portions of a formal CIA investigative referral sent on Sept. 7, 2016, to fired former FBI Director James Comey and fired former counterintelligence official Peter Strzok asking them to investigate the Clinton campaign’s anti-Trump collusion smear operation in light of Russia’s knowledge of the plan and the likelihood it could be tainted by deliberate Russian disinformation. Rather than act on the CIA investigative referral in the same manner they had launched a full-blown counterintelligence investigation of the Trump campaign, Strzok and Comey refused to initiate an investigation.

“Per FBI verbal request, CIA provides the below examples of information the CROSSFIRE HURRICANE fusion cell has gleaned to date,” the memo states. “An exchange [REDACTED] discussing US presidential candidate Hillary Clinton’s approval of a plan concerning US presidential candidate Donald Trump and Russian hackers hampering US elections as a means of distracting the public from her use of private e-mail server.”

The cover note of the memorandum stated that the information within was provided to the FBI “for the exclusive use of your Bureau for background, investigative action, or lead purposes, as appropriate.”

There is no evidence the FBI ever took any action to ensure that Russian knowledge of Clinton’s plans did not lead to infiltration of that campaign’s operation by Russian intelligence agents. The CIA referral, specifically its reference to a “CROSSFIRE HURRICANE fusion cell,” suggests that the Obama administration’s anti-Trump investigation may not have been limited to the FBI, but may have included the use of CIA assets and surveillance capabilities, raising troubling questions about whether the nation’s top spy service was weaponized against a U.S. political campaign. 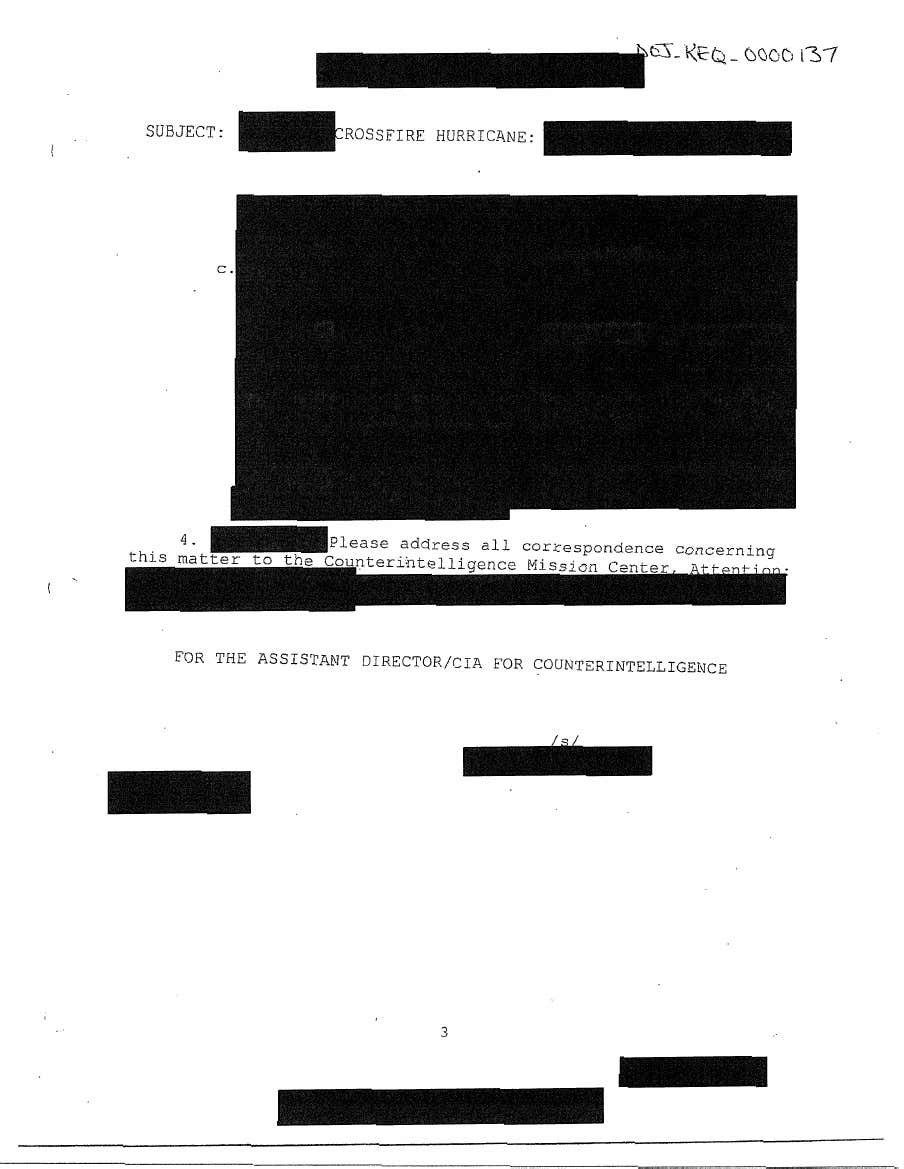 The CIA referral declassified and released by Ratcliffe shows that it was personally addressed to both Comey and Strzok. Because the CIA does not have legal authority to police domestic matters, it informed the FBI of the agency’s concerns about potential Russian knowledge of Clinton campaign’s plan to smear Trump as a Russian asset, especially given the FBI’s ongoing counterintelligence investigation of the Trump campaign. Not only did the FBI refuse to investigate whether the Russians were using the Clinton campaign to interfere in the 2016 national election, but Comey also claimed last week that he knew nothing whatsoever about the CIA investigative referral.

During a Senate Judiciary Committee hearing on the matter last week, Sen. Lindsey Graham (R-S.C.) asked Comey point blank whether he remembered receiving a referral from the CIA personally addressed to him. Comey claimed that he had zero recollection of the CIA asking him to investigate whether the Clinton campaign was potentially compromised by Russian disinformation artists.

“That doesn’t ring any bells with me,” Comey claimed under oath.

“You don’t recall this inquiry I just read about September 2016?” Graham followed up, referring to the CIA referral sent to Comey on Sept. 7, 2016.

“No, as I said it doesn’t…It doesn’t sound familiar,” Comey again claimed.

Following a lengthy investigation of FBI abuses of power under Comey’s watch, the Deparment of Justice (DOJ) Office of Inspector General (OIG) concluded in its summary report that Comey had repeatedly violated FBI policies and cast a cloud over the entire bureau, damaging its reputation and that of its 35,000 employees.

“Comey set a dangerous example,” the reported stated. Although the OIG referred Comey to DOJ for criminal investigation and potential prosecution, DOJ ultimately refused to hold Comey accountable. Comey’s deputy, Andrew McCabe, was similarly referred for criminal investigation after he repeatedly lied to DOJ officials under oath, but DOJ also refused to prosecute McCabe for lying under oath.

One of Comey’s attorneys at the FBI and a member of former Special Counsel Robert Mueller’s legal team recently pleaded guilty to charges of fabricating evidence in an application to spy on former Trump campaign affiliate Carter Page.

BFD....when someone goes to prison, I’ll raise an eyebrow.

At one point, Obama asked whether there was any evidence of collaboration between the Trump campaign and Russia, but any response that may have been recorded in Brennan’s notes is redacted.

This becomes a tedious game. At some point, the only way to cleanup D.C. may be to drop a 50 MT fusion bomb on it.

Yet another release that undeniably puts Obama right into the middle of the entire operation, briefed on it every step of the way. Nothing will come if it.

It isn’t truly declassified until you see every word.

And Barr does nothing.
Forget the fine words and look at what Barr has done.
If Barr ever intended to investigate honestly he would have never been approved by the Senate...

Here we see the FBI, CIA, and multiple other federal agencies complicit with the Hillary Clinton and Obama camps to literally cook up a bunch of lies in order to use the full weight of the US Government to accuse, investigate, and demonize an innocent man.

The FBI, DNC, and the rest of the Satanic Deep State Cabal are demonic garbage for their lies, false accusations, and attempts to destroy the innocent.

No one in his right mind should trust any of these creeps.

This is just in time for Pence to use in debate tomorrow.

I want he unredacted version.

The same guys who hid it for years redacted it.

It's at the point where when one sees multiple alien spacecraft attack Washington DC in the movies, one realizes the aliens are doing We The People a huge favor.

Democrat City is so corrupt and evil; that Godforsaken town literally does more harm than good to our society. 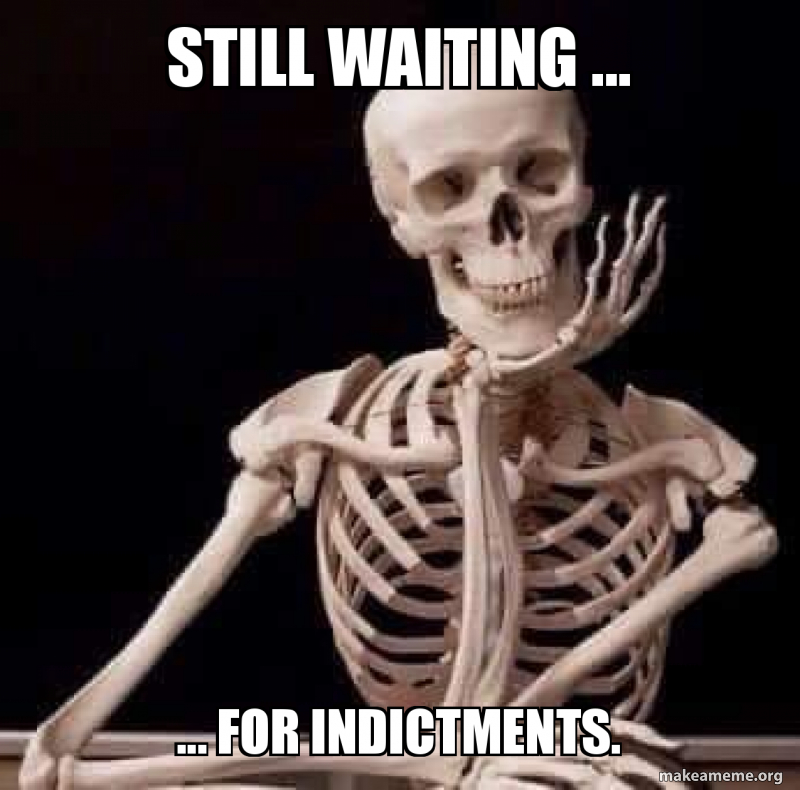 Mr. Ratliffe making things embarrassing for AG Barstool; sitting on all this evidence. Or maybe not.

I think I know that guy

Forgive me all for being sceptical, but how could the Meuller investigation be fair if it didn’t know/find out/accept that everyone in the prior administration KNEW that the Hillary campaign was faking the Russian collusion scam, and disclose that as part of it’s findings? I’m guessing this is why Obama didn’t do anything to stop the Russian interference, he already knew it was a made up story by Hillary.

How much more evidence is needed to arrest the traitors. They have put this country through four years of hell and nothing is done about it. When there is no law or justice, civilization ends.

“Cry havoc and let slip the dogs of war”. Shakespeare

18 posted on 10/06/2020 1:46:38 PM PDT by Guenevere (**See you at the Franklin Graham Prayer March in DC on September 26!**)
[ Post Reply | Private Reply | To 17 | View Replies]
To: Kaslin
Top U.S. intelligence officials were so concerned heading into the 2016 election that the Russians were aware of and potentially manipulating Democratic presidential candidate Hillary Clinton’s plans to smear Donald Trump as a Russian agent that they personally briefed President Barack Obama on the matter

They were 'so concerned' that they jumped on board and continued to push this hoax on the American public for years both as public servants and later as high paid analysts, novelists, anonymous sources to the media etc... Amazingly (/s) Mueller and Horowitz never saw any of this.

19 posted on 10/06/2020 1:47:32 PM PDT by monkeyshine (live and let live is dead)
[ Post Reply | Private Reply | To 1 | View Replies]
To: Kaslin
Good grief! There is more than enough probable cause to indict/arrest Hillary Clinton for violations of the espionage act, evidence tampering, obstruction of justice, treason and conspiracy with two or more to commit all the above.

What in Sam hell is Barr waiting for? Why is Christopher Wray still the head of the FBI?

This is freakin crazy.