So Joe Biden has picked the runt of the litter, an also-ran loser in the Democratic primaries who never one a primary, barely escaped sitting at the kiddies table, whom the voters didn’t think was qualified to be president, yet whom Biden wanted to be a heartbeat away. Or maybe his puppet masters, the voices in his earpiece, and the voices in his head picked her from a list loaded with more baggage than an airport carousel.

Biden picked a running mate who labeled him a racist opponent of school busing who cavorted and collaborated with segregationist Democrat colleagues in the Senate where Biden supported legislation leading to the incarceration of young black males. Of course, Harris did her part in incarcerating young black males with a vengeance as states attorney in San Francisco and attorney general of California.

Kamala Harris also believes Biden is a sexual predator, saying we should believe his accusers, even staffer Tara Reade, who has credibly accused him of sexual assault. Reade certainly brings more evidence to the table than Brett Kavanaugh’s accuser, whom Harris viciously attacked in one of the most unhinged attempts at character assassination we have ever seen.

Dementia and Heels will refuse to concede after the election.

I’ve never one anything either but I did get more than 2%.

Who edits this sh!t? 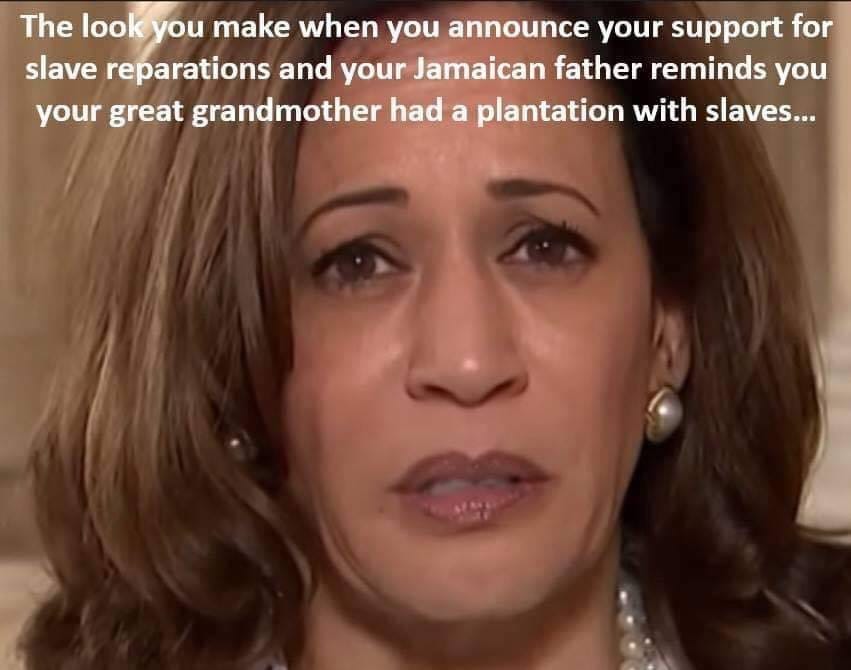 My 2 cents...traditionally a VP pick is done to lock in a State in the election. Kamala is from CA, so somethings unusual here. My guess is the Dems that control Biden’s puppet strings wanted her from the start but she couldn’t hack it in the primaries. So what to do? Put in the puppet Biden and her as VP.

And the last week of Joe’s “deciding who” was just to give her recent Botox time to look better.

There is no “real” Kamala ( “comma-la” ). She is a political shape shifter and currently pointing left.

HaHa, I spotted that too. I’ve never “ONE” anything either.

Regardless of what anyone thinks of her and Biden, this will be a tough race given that they have the MSM and lots of powerful benefactors.

No one ever won an election who underestimated their opponent.

I missed that one...good catch.

I’m not sure such a thing as an editor or proofreader even exists any more. The spelling, punctuation and grammar I see in “journalism” these days is horrible. I could do better in 4th grade.

These people are suposed to be college educated journalists, who make their living using the printed word, and they usually don’t know the difference between

to and too
lose and loose
quiet and quite - sometimes quit
and now one and won...

10 posted on 08/13/2020 5:50:31 AM PDT by Paleo Pete (I smile because you are family. I laugh because you can do nothing about it...)
[ Post Reply | Private Reply | To 4 | View Replies]
To: Kaslin
"So Joe Biden has picked the runt of the litter, an also-ran loser in the Democratic primaries who never one a primary, barely escaped sitting at the kiddies table, whom the voters didn’t think was qualified to be president, yet whom Biden wanted to be a heartbeat away. Or maybe his puppet masters, the voices in his earpiece, and the voices in his head picked her from a list loaded with more baggage than an airport carousel."

Biden didn't pick Harris. Let's just get that straight out the gate. The people pulling strings behind Biden picked Harris.

My thoughts:
1. Harris could not break 10% support in her home state in the primary. That tells you what the voters think of her. This was despite a media push early on to establish Harris as the "presumed front runner".
2. There is not a lot of enthusiasm for Biden. But he's the least "scary" of what passes for Democrat candidates. And while his words say one thing, his agenda, which is that of the puppetmasters, is anything other than his publuc speech, when he gets to talking specifics at all.
3. Those in the shadows are determined to get someone like Harris in power--even though her policy positions are unpopular, people see her as a morally bereft opportunist who has no qualms about abusing the power she is given--sort of a combination of the worst traits of Hillary Clinton and Barack Obama. But, Harris will benefit her puppetmasters and will "stay bought".

As pointed out early this year, Biden is a placeholder, a bait-and-switch candidate who is the "gentler, kinder" false marketing while the real intended candidate is put into the next in line position. There is no interest in the will of the voters, except the facade of a democracy to prevent an uprising. Make no mistake, Harris (or someone of similar characteristics) is the intended nominee, not Biden.
This is beyond cynical political considerations, its evil.

I think Tucker should start calling her “Comma La’Harris” since the Left jumped on him for saying Camel-a.

Plugs and the Plugee. They really have got to be kidding about

Choose and chose.
It’s and its.
We’re and were.
They’re, there and their.

Nothing to do with winning a state. She is to win the woman vote, race vote, and to put a feather in the dems cap because if Biden wins, he will absolutely step down before his 4 yrs is up and she will be the 1st woman president.

How many Indian-Americans and H1b workers reside in America?

How many Indians have control and influence in Big Data?

How many Indians (here and in India) code for society-affecting Google, Facebook, Twitter, Youtube, Microsoft, etc.? How many of those will support Biden/Harris fervently, with every tool at their disposal?

Indians, like muzzies, have been steadily gaining population here, with our government’s H1b help. But unlike muzzies, they’ve done it quietly, being nice, good, friendly folks.

I do not doubt that they, like all growing demographics, want to have control and to do things that benefit their own kind over those not their kind. Tribal human nature.

And, Indians do the caste system (here, too), fitting right in with our leftists’ goals.

I hope she gets further vetting. I saw her busing sob story but I wonder how her race was classified in school at Berkeley. Was she bused as a black, or as a white, because both races were forcibly transported?

“ Nothing to do with winning a state. She is to win the woman vote, race vote....”

Yeah, but there are women that check those boxes that “could” deliver a state. Stacey Abrams for instance.

That’s why I think it was Kamala all along.