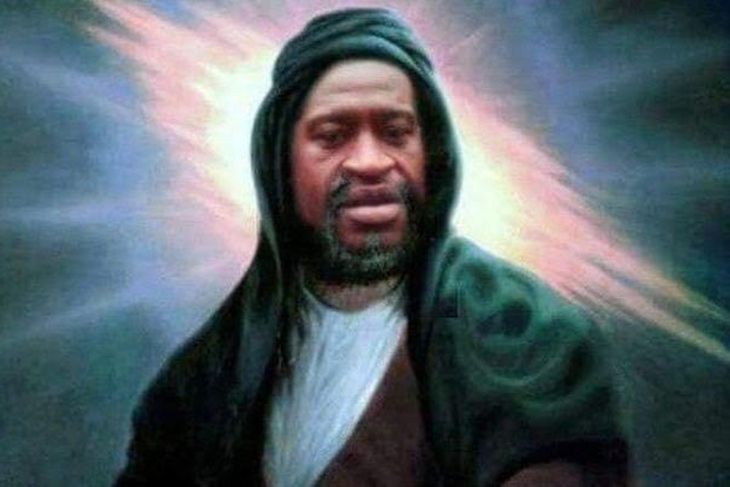 Dr. Reza Parchizadeh, a political theorist and analyst, recently noted on Twitter that “the Iranian regime has turned the late #George_Floyd into Saint George, Shiite-style!” And sure enough, Parchizadeh posted a painting of Floyd depicting him in the way Shi’ite Muslims often depict their holy figures: in a green robe and surrounded by an aura of holy light.

As incongruous as the image is, it’s perfectly fitting: Floyd, whose murder touched off the rage for destruction that is afflicting America today, is the perfect symbol for the Iranian Islamic regime’s oft-repeated aspiration: “Death to America.”

Floyd’s criminal record and history of violent behavior and drug use may seem at first glance to be incompatible with sanctity, even sanctity as the Iranian mullahs envision it, but actually the canonization of Floyd is entirely reasonable within the context of present-day Iran.

When it ordered the Iranian people to scream “Death to America” every Friday in mosques, the regime already made the destruction of America into a holy act. The destructive riots and ongoing unrest in the United States that began with Floyd’s murder can be seen, through pious Shi’ite eyes, as a manifestation of Allah’s judgment against the Great Satan. So they are holy as well, and therefore their linchpin Floyd is a saint. What else could he be?

Well, he did beat his wife

Anything to oust Trump

I thought Obama was a saint

I do believe the Iranian regime are making fun of us, rather than really making this guy out to b a saint.

We should send that question to the TV show, “Ask the Imam.”

It’s on Al Jazera right after the morning prayers.

9 posted on 06/22/2020 7:03:00 AM PDT by SJackson (wondered...what 10 Commandments would have looked like if Moses had run them through..Congress, RR)
[ Post Reply | Private Reply | To 8 | View Replies]
To: dennisw; Cachelot; Nix 2; veronica; Catspaw; knighthawk; Alouette; Optimist; weikel; Lent; GregB; ..
Middle East and terrorism, occasional political and Jewish issues Ping List. High Volume If you’d like to be on or off, please FR mail me.

It’s getting weirder out there...

Iran just sent Venezuela some food along with gas and is to open a grocery store [a chain?] in Venezuela:

Iran also named the street that the British Embassy in Tehran was on “Bobby Sands Road”.

...The food follows Iran’s recent flotilla of five tanker ships filled with gasoline sent to relieve Venezuela’s deep fuel shortages, the result of broken-down refineries and U.S. sanctions. Iran also provided Venezuela with key ingredients needed to restart refineries and resume producing its own gasoline....
“That ship can carry 23,000 tons,” said Russ Dallen, head of the Miami-based investment firm Caracas Capital Markets, who tracked the ship’s progress. “That would be enough food for a whole chain of Iranian supermarkets across the country, not just one.”