Did John Roberts Set up an Offshore Bank Account in Malta right after his Obamacare Ruling? You decide...
Voat ^ | OregonAngel2

At least four times now Justice John Roberts has betrayed the conservatives. Further he has twisted the law and written decisions that were legal contortions inconsistent with his legal ability and history.

What has been going on? What could have motivated him to betray his country and his legal integrity like that?

It has been suggested that Roberts is secretly homosexual, and he did pro-bono work for gay activists back in 1996, but the stigma attached to that has effectively been removed by societal changes over the decades. He appears to be happily married in the normal sense.

It has been suggested that his children’ adoptions were illegal and thus he feared that they could be taken away from him. Yet his children are now adult age. They have outgrown any risk of removal.

Just a few months ago Chief Justice Roberts ruled that the Trump administration could not place the citizenship question on the 2020 Census. This defies the supermajority desires of both political parties, and clearly violates the Constitution and precedent. It is also an affront to common sense.

Furthermore, the history of John Roberts demonstrates a very sharp legal mind. He should not have authored something that is such poor legal reasoning. It is an affront to his integrity and his self respect as an American and as a lawyer.

Why is Roberts still backing legal decisions that are both a betrayal and such a legal embarrassment? What information could bad actors have on him that could explain his betrayal.

Let’s look more carefully at his actions and timing:

Immediately following his disastrous Obamacare decision where he upheld the Individual Mandate, he went to the island of Malta. He flew to Malta on the Fourth of July 2012. He left his wife and children behind, and went to the island for two weeks, where he gave a few lectures on “The Supreme Court in Historical Perspective”.

Roberts referred to Malta as his “impregnable island fortress”. It has a rich history. It was where HW Bush met with Gorbachev on ships in the harbor, and it is where the Catholic Knights of Malta are headquartered.

There is no public information on how much he was paid for these lectures or who was present, but as the Clintons example showed, lectures in foreign countries can result in very large fees. According to one source the later President of the European Council, Herman Van Rompuy of Belgium was present on Malta at the same time.

The interesting thing about Malta is that it is a major offshore banking location. It is one of the top ten locations for offshore banking. Banking arrangements for non EU individuals takes about two weeks - the length of time Judge Roberts visited. Even though he only gave 6 lectures, he stayed long enough to set up an account.

Furthermore, it is possible to incorporate a company in Malta and set it up so that it is not public who actually owns the company:

"The ultimate beneficial owner (UBO) of a company need not be on public record. Company formation can usually be completed in a few days for EU nationals. It will take a bit longer (a couple of weeks) for other nationalities.”

It would have been possible for Judge Roberts to have set up a private corporate account which could have received funds without anyone publicly knowing it existed. It is at least possible that there was some sort of covert payoff there during those two weeks.

As Forbes notes:"The Obamacare Supreme Court ruling seemed strange. Chief Justice John Roberts’ reasoning was incoherent. The conservative’s dissent read like it was originally meant to be a majority opinion. Now, we know why. According to Jan Crawford of CBS News, John Roberts switched sides in May, withstanding a “one-month campaign” from his conservative colleagues to change his mind.

“I am told by two sources with specific knowledge of the court's deliberations that Roberts initially sided with the conservatives in this case and was prepared to strike down...the individual mandate,” said Crawfordon CBS’ Face the Nation. “But Roberts, I’m told by my sources, changed his views, deciding to instead join with the liberals.”"

Was Judge Roberts waiting for a sufficiently high offer and threatening to side with the conservatives?

Consider that if the account was set up in Malta at that time, it has been possible to put money into it covertly ever since then.

The second oldest bank in Malta is HSBC. https://www.hsbc.com.mt.

HSBC has been deeply entwined with payoffs to the Clinton Foundation including accounts for Jeffrey Epstein (the convicted pedophile of Sex Slave island fame) and Denise Rich (of the infamous Clinton pardon fame).

"The charitable foundation run by Hillary Clinton and her family has received as much as $81m from wealthy international donors who were clients of HSBC’s controversial Swiss bank.”

James Comey, the disgraced fixer for the Clintons, is on the Board of Directors of HSBC. List of directors and their role and function.

HSBC has also been deeply involved in drug money laundering as well as handling money for adversary nations under sanctions, and the Obama DOJ intentionally refused to prosecute:

"The US government decided not to pursue criminal charges against HSBC for allowing terrorists and drug dealers to launder millions of dollars after George Osborne and the UK banking regulator intervened to warn that prosecuting Britain’s biggest bank could lead to a “global financial disaster”.

“Rather than lacking adequate evidence to prove HSBC’s criminal conduct, internal treasury documents show that DoJ leadership declined to pursue [its legal team’s] recommendation to prosecute HSBC because senior DoJ leaders were concerned that prosecuting the bank ‘could result in a global financial disaster’– as the FSA repeatedly warned.”

The 2012 settlement detailed how Mexico’s Sinaloa drug cartel and Colombia’s Norte del Valle cartel laundered $881m through HSBC and a Mexican unit. In some cases, Mexican branches had widened tellers’ windows to allow big boxes of cash to be pushed across the counters.

HSBC also violated US sanctions by working with customers in Iran, Libya, Sudan, Burma and Cuba."

While the above is worthy of suspicion and further investigation by the authorities, It is also possible that there is something even more damaging that could have been affecting Roberts’ decision that took place much earlier. That has to do with the secretive and unusual circumstances of how he adopted his children.

Further he has twisted the law and written decisions that were legal contortions inconsistent with his legal ability and history.

This is it in a nutshell. 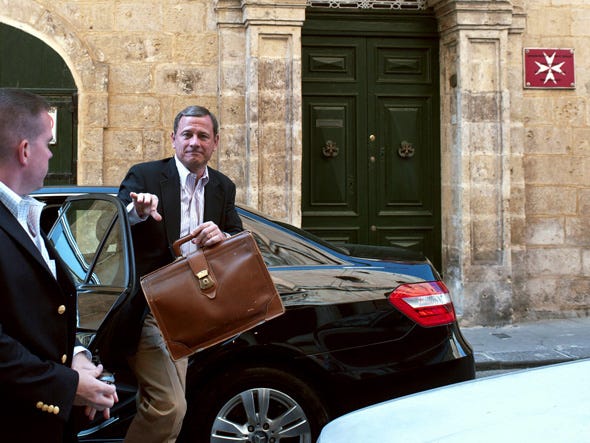 Shortly after the Obamacare vote, a photo of Roberts “on vacation” on Malta was widely put out by the MSM. I thought the photo was odd. He was in a sport coat, carrying a briefcase, getting into a taxi, alone, in front of a financial institution. No kids, no wife, nothing.

Malta is one of the world’s leading money laundering headquarters and is not what one thinks of as a vacation spot.

He is on the take.

I’m not quick to accept conspiratory theories, but the lousy opinions authored by or joined by Justice Roberts do make me scratch my head. He either is rotten or he is so weak-willed he goes the way a slight wind blows from the left.

Just find him doing something that even has the appearance of being racist - that’ll end his little job real quick.

Somebody owns him....it would seem. Wouldn’t the other justices know?

I still remember how agreeable John Boehner became after his private golf game with Obama.

But if you're going to take shots at either a king or a Chief Justice of the Supreme Court of the United States of America and his Democrat Party funds, unh, friends, then you'd better not miss.

“It has been suggested that Roberts is secretly homosexual ...”

That seems so obvious that I question its value as leverage against him.

14 posted on 06/18/2020 9:44:33 AM PDT by cdcdawg (Paleoconservatives were right about literally everything.)
[ Post Reply | Private Reply | To 1 | View Replies]
To: SkyPilot
Not a bad life for a ‘public servant’. Our government and our legal system are what need to be ‘reformed’, not everything else that DC wants to ‘reform’.

I would like to see a very public committee of citizens, non-Ivy attorneys, business owners, etc. inquiry into how the government we now have has inappropriately veered from the government that was envisioned by our nation's founders, and that they delineated in the US Constitution.

But about Gorsuch ? Didn't see that one coming.. and from someone supposedly so brilliant.

There are three possibilities I can think of. One, he was persuaded/coerced by the Trump hating/closet-homo Chief Justice. Two, Trump has been touting the two "great Supreme Court justices" endlessly at all his rallies, press conferences.. etc and Gorsuch didn't want to come across as a Trump puppet by siding with the Left on a major issue, ala some of Kavanaugh's early rulings. Third, being a Denver guy he probably has a bunch of homo friends and didn't want to let them down.