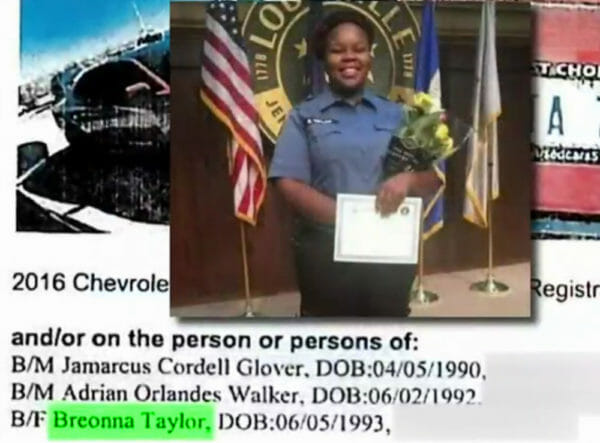 Image is a screenshot taken from video at WAV3.com. Cropped and scaled by Dean Weingarten

On March 13, 2020, at about 1 a.m., in Louisville, Kentucky, five police officers, at least three who were in plain clothes, without body cameras, executed a no-knock raid, with a warrant naming Breonna Taylor.

The warrant had the right address and person.  The officers were not wearing body cameras, because they were narcotics officers, and were exempt by policy.

No body-camera footage is available because officers in the Criminal Interdiction Division who conducted the search warrant do not wear cameras, police chief Steve Conrad previously said.

The three narcotics officers, in plain clothes, fired back, about 22 rounds, missing Kenneth Walker, but hitting Breonna eight times, killing her. The two other officers who were there did not fire. Kenneth Walker immediately called 911, believing a home invasion was occurring.

How were Breonna and Kenneth supposed to know it was police breaking down their door, and not a gang of criminals? Neither of them had criminal records. Many criminals claim to be police. Mere verbal claims of being police should not be sufficient identification.  A Louisville councilwoman, asked: How would a person know to comply? From wdrb.com:

TOPICS: Constitution/Conservatism; Crime/Corruption; News/Current Events; US: Kentucky
KEYWORDS: banglist; breonna; donutwatch; kentucky; ky; noknock Navigation: use the links below to view more comments.
first 1-20, 21-24 next last
How can an honest citizen know the people breaking down his door, in the middle of the night, are police?
1 posted on 06/13/2020 5:01:15 AM PDT by marktwain
[ Post Reply | Private Reply | View Replies]
To: marktwain

And neither do the so-called police~

If Kenneth fired a round off, how did Breonna take the bullets? Wouldn’t officers return fire in the direction the fire came from? All 22 rounds fired missed Kenneth by a mile? Are we sure it was Kenneth that had the gun?

Since there was a warrant, let’s read it and find out answers.

Although apparently it’s ok to lie on warrants anyway.

No-knock raids are an abomination and should be outlawed, as it leads to situations like this one.

There’s more to it than the police. They’re the ‘end user’ of policies, laws and rubber stamps made by politicians, bureaucrats and judges. The police give this corruption a face. In the end tho it’s the electorate who voted for law and order thinking that trading a bit of liberty for security would be ok.

“Although apparently it’s ok to lie on warrants anyway.”

It is for the FBI so why not locals?

The tactic, why is this tactic used?

There are many horror stories of deadly no knock raids happening at the wrong address. Too many.

One of the many reasons I want an end to the WOD.

Sen. Rand Paul introduced legislation Thursday to stop the use of no-knock warrants, an idea that Democrats are also pushing in their calls for police reform.

The Kentucky Republican’s bill, titled the Justice for Breonna Taylor Act, requires federal law enforcement officers to give notice of their authority and purpose before entering a home. The law would also apply to state and local law enforcement agencies that receive money from the Justice Department.

I have heard that on the street if you get a break in, and they are yelling “Police!”, the very best thing you can do is to VERY LOUDLY YELL BACK “POLICE!!!”, then to immediately get face down on the floor in a spread eagle position.

Brilliant psychology, if you think about it.

1) If you yell police! back, the must assume that other police (unknown agency maybe) are *already there*, so they won’t charge in guns blazing.

2) Seeing you sprawled out on the floor, they are inclined to make a second wrong assumption that this room has already been “cleared”, and the other cops left in pursuit of someone. So while they may “secure” you they won’t execute you gangland style, mostly because you are another cops’ take down.

3) Worst case, if they are actually robbers pretending to police, at worst you still have 50/50 odds of getting out without being killed. You may just lose you stuff and get some free novelty handcuffs.

There are some basic police reforms that have to be instituted nation-wide: end no-knock warrants, end choke holds and neck restraints, end qualified immunity and mandate that every cop anywhere in the US must have an active body cam for all interactions with the public. Unnecessary deaths caused by the police are not only a menace to the rest of us, they’re also eagerly awaited by the radical left, which is using them to turn the US into a weird combination of the Road Warrior and Cultural Revolution-era China.

The root cause of the current rioting and pillaging is criminal activity and resisting arrest.

There is no right to resist arrest.

I'd say the American problem in 2020 consists of a lot of things, one of which is the way the police do their business. I don't want to ever have anonymous men forcing their way through my door without announcing who they are and what they want, and then shooting me if I try to resist their entry, all under the cover of a no-knock warrant. I also don't want them to get away with my murder under the cover of qualified immunity. I also don't want to get choked to death by some badly trained cop who was working at McDonald's last year.