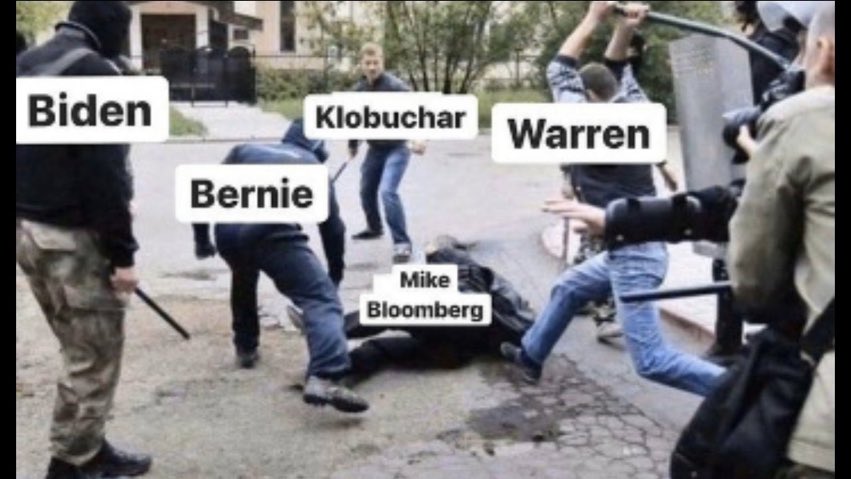 My first clown show, too.
Biden looked and sounded better than usual.
Little Gulp got hosed.

43 posted on 02/19/2020 7:25:48 PM PST by Lurkinanloomin (Natural Born Citizens Are Born Here of Citizen Parents_Know Islam, No Peace-No Islam, Know Peace)
[ Post Reply | Private Reply | To 39 | View Replies]
To: Helicondelta
This has been a really fun debate to watch. It has all the usual clowniness of all the debates, plus lizzy has a cold so her voice is breaking making her sound more like a begging teenager and even more victimmy than usual. She's a really upset teenager this time.

Bernie is as angry and curmudgeonly as Lizzy is victimmy and pleading.

Mike is simply an *sshole and is getting his ass kicked because he's occasionally honest but can't pull of the hard honesty like Trump because even when he's honest he's an *sshole.

But they are landing some good blows against each other, not Pete literally, basically each exposing the other for the frauds they are. A couple of them have some good comedian writers.

It's all very funny and all very sad if you are a democrat, and I'm not, so I'm not sad :-) sorry not sorry.

Amy though a democrat comes off as someone you wouldn't mind working with. I guess that's damning with faint praise.

Biden as usual is slurring and running words together and can't put a sentence together without starting on 3 other sentences in the middle of the sentence.

I can't remember a more politically happy time in my life, which is not to say I'm not aware of the constant danger freedom is in when the government has way way way too much control over our freedom. But at this moment in the eternal war between free rational men and deluded sociopaths ... birds are chirping and the sun is shining for a bit ... and the deluded sociopaths actually appear to most of America as deluded sociopaths.

Ohhhh ho ho ho Bloomberg said 'we're not going to just throw out capitalism and replace it with socialism we've seen that in other countries and it just won't work' ... after which everyone kind of boos and then Liz talks about the wonderful things about communism implicitly trying to say 'this isn't communism'' ... she's just going to give 567 Trillion dollars to everyone with a 2cent wealth tax.

I'm telling you ... this is SO bad for democrats.

Former Midwestern Mayor Pete Buttigieg attacked both Bloomberg and Sanders, warning that one threatened to “burn down” the Democratic Party and the other was trying to buy it.

As Democrats were clustered inside the casino, outside on the Las Vegas Strip, Republicans hired a mobile electronic billboard truck to drive slowly in front of tourists, flashing a message promoting Trump’s reelection.

The little man is living proof that the Democrat Party is the party for slavery.

Starting out by saying that I disagree with virtually every single position that he has, Sanders is easily the best politician on that stage, with the rest tied for last.

what about fat lesbians and horse-faced broads?

Sanders has the advantage of consistency, he was socialist before socialism was cool.

She actually looks and sounds normal.

Bloomberg has a lot of baggage.

Bernie is just an perpetually angry, crazy old man, waving his fists, face turning red. He’s a parody of himself.

people here discount him but he is dangerous.

>>Moments later, Pete Buttigieg offered his criticism for Bloomberg “Let’s put someone forward who is actually a Democrat,” Buttigieg said.

that sounds like it was directed at “Independent” Communist Bernie Sander.

Someone put a Microphone on James Carville.

Nobody lost voters tonight but Bloomberg...Even Joe got some voters back.

It’s kind of scary how badly Bloomberg did in the first half. I don’t want to see him crash and burn. I want to see him clash with Bernie until the convention and for a third candidate to bring up the rear.

He is starting to come back in the 2nd half and score some blows on behalf of the so-called moderate camp.

57 posted on 02/19/2020 7:36:45 PM PST by CheshireTheCat ("Forgetting pain is convenient.Remembering it agonizing.But recovering truth is worth the suffering")
[ Post Reply | Private Reply | To 39 | View Replies]
To: campaignPete R-CT

Yes, he is guaranteed at least 45% with all the Trump haters, and can get higher if Trump does not run a focused campaign.

same as his Broadway song and dance number