That is a very poorly photoshopped picture...

Yeah I think I agree with you there ... Joe did (relative to what he's done) well.

It's cliche but ... Trump won this debate. For a democrat not in the grasp of TDS which isn't all of them, he's got to appear as the least worst choice.

He just needs more practice, that is all. A shaky debate start won’t effect him at all. He can buy himself anything he wants and after a couple more of these, he will be seen as the only moderate who can win of the bunch. 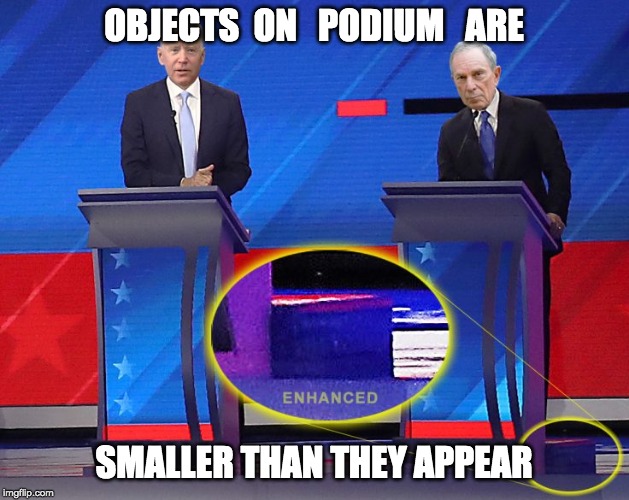 The end of Bloomberg??? Warren goes on the attack. Body shot after body shot and Bloomberg stutters, stammers and then starts blinking like a hostage.

Joe is Terrible, but he was way less terrible than I thought he would be.

Sure he can’t remember where he is going with 1/2 his statements, but Joe voters won’t abandon him over this.

This all points to Sanders with 35% of the delegates and as Bernie predicted, the second ballot Super delegates pull tyh the pin on the Bernie Bro bomb and we all kick back, grab a cold one and pop popcorn and roast marshmallows on a burning Milwaukee.

That's exactly my thought. Hey you kids, get off my lawn, and you're not getting your ball back!

Tulsi will be back in four years. By then the OLD GUYS will be gone.

Amy K reminds me of Sally Field’s horrible “You like me! You really like me!” Oscar speech.

Yeah, all those billions are going to come in handy after this cluster of a start. I hope the pundits don’t throw him under the bus tonight in their post game analysis. He did have a more compelling closing speech than the others, there’s that.

71 posted on 02/19/2020 7:58:31 PM PST by CheshireTheCat ("Forgetting pain is convenient.Remembering it agonizing.But recovering truth is worth the suffering")
[ Post Reply | Private Reply | To 63 | View Replies]
To: conservative98

30% of Democrat primary voters want to send Billionaires to the Guillotine. With 6 viable candidates and only Bernie with a ground game, no way Bloomberg gets more than 20% of the delegates.

If Bloomberg gets the nomination, 20% of Democrats vote green party.

“I watched a little of it, after a half hour, I couldn’t take any more.
Switched to the Trump rally.”

I was flipping through the channels and caught crazy Bernie crazily ranting about climate change in his typical crazy way. That guy is crazy. And he’s the front runner!

My father lost his job. And then my mother lost an eye. And then I lost my mind.

Am I a DEM speechwriter now?

just checked out my prog son in law on FB. Steaming over DNC smacking the Bern and are getting discouraged wasting their vote on Bern.

He and his friends are totally disgruntled over their choices and are resigned to 4 more years.
Unfortunately he has corrupted my daughter.

79 posted on 02/19/2020 8:08:09 PM PST by AbolishCSEU (Amount of "child" support paid is inversely proportionate to mother's actual parenting of children)
[ Post Reply | Private Reply | To 16 | View Replies]
To: CheshireTheCat
Bloomberg literally looks like the proverbial deer in the headlights—total doe eyes......completely out of his league against the rest of them.

No question.....he was way out of his element.

Bloomie's such an annoying little creep......he's got a dumb opinion on just abut everything.

Wouldnt be so bad if he had 1-2 enlightening political opinions that might make him presidential material.

But no......he's a billionaire New Yorker and has a dopey opinion on farmers.