For more than a decade, Hezbollah and therefore Iran have maintained “sleeper agents” in America who await only a coded signal to commit mass murder and wreak maximum chaos.

“There would be certain scenarios that would require action or conduct by those who belonged to the cell,” one of three sleeper agents arrested by the FBI since 2017 is quoted saying in court papers.

The sleeper agent, Ali Kourani, told the FBI Joint Terrorism Task Force that he would have expected to be activated if Iran and the United States went to war.

Other precipitating events would include major U.S. military action against Hezbollah or its Iranian overseers.

“In those scenarios the sleeper cell would also be triggered into action,” Kourani said.

That would certainly seem to include an airstrike killing Iran’s most prominent military figure, General Qassem Soleimani.

In the aftermath of that startling action, a senior U.S. intelligence official said that if the Iranians remain rational they will refrain from mounting an attack on the American homeland for fear of sparking a war they cannot possibly win. He noted in the next breath that emotions are no doubt running high in Tehran.

“If you remove the rational thinking…” he said.

The official figured that Kourani and a second sleeper agent named Samer El Debek had almost certainly been replaced after they were arrested on the same day in different cities in 2017. The third, Alexei Saab, who was arrested in July of 2019, had already been in place for years but was unaware of the other two.

“There could be sleeper cells all over the place,” the official said.

And they are presumably under orders, just as Kourani was in the Bronx, El Debek was in Dearborn, Michigan... ,

And in the past 40 years we’ve not pissed off the Iranians enough that we wouldn’t have a single “event?”

This crap is getting pretty dramatic.

How about we wait until something happens.

Got two in Congress, right now. Talaib and that Somali moron.

Fox News was activated a while back, what else do they have?

Yahoo, Reuters and all the rest of them are pushing the terrorists to act.

What have they been waiting for?

They won’t be sleepers anymore.

Anyone heard a response from Val Jar yet? Maybe she’s prepping her weapons?

Worse. Iran will now have us all on triple secret probation.

And there are many Americans who carry and I hope they remain extra vigilant and those who tend to not carry start to regularly.

America should never have allowed any Muslims into the country.

ATT owned radical lefties cheeping on a US attack .

Time for all to cancel this American hating ATT .

ATT needs to be investigated . 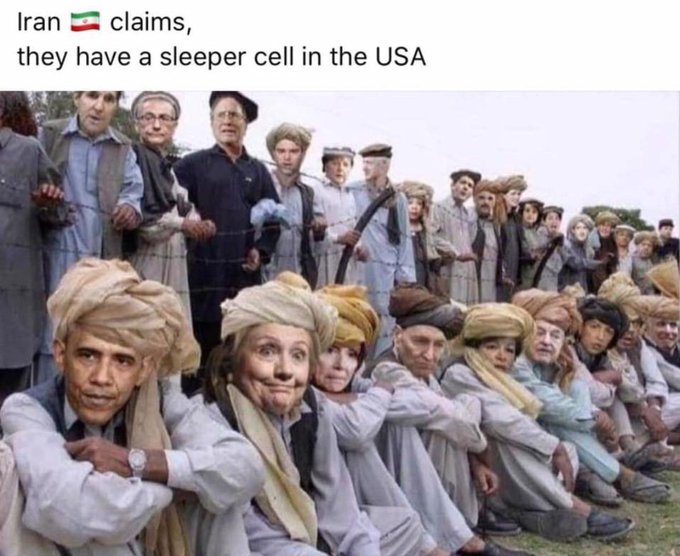 They are going to be “woke” too?

It's nice to see Yahoo's concern trolls suddenly becoming aware that Iran is a terrorist state and has been since Khomeini overthrew the Shah.

Depends on whether the sleepers can be bothered to drop their remotes and get out of their recliners. Cushy America been very good to criminals sneaking in from all over the world.

The answer is obvious that it has: They’re all composed of Congressional Democrats.