With Virginia Democrats taking over all branches of state government, a firearms store owner in the state says sales of guns, magazines, and ammunition are up 200%, and more of his customers are paying in cash.

“This is the largest Christmas and November, December that we've had, basically, since Trump has come on board. The only other person that was a better salesman right now is when we had President Obama,” said Jerry Rapp, owner of SpecDive Tactical, in Alexandria, comparing the administrations of President Trump and his White House predecessor, Barack Obama.

“Every time [Obama] turned around he was going to ban something or make something illegal. But even that isn't even close to the amount of sales we're selling right now of magazines, of guns, of every kind of gun from pistol, rifle, shotguns, to AR platforms" and ammunition, Rapp told the Washington Examiner. "We can't keep it in stock.”

Since Democrats took the majorities of both chambers in Virginia’s state legislature after big wins in the November elections, gun control proposals that include bans on “assault-style” weapons, restrictions on magazine capacity, universal background checks, and restrictions to one gun a month purchases have all been brought forth.

Same at the federal level, with House Democrats entering their second year in the majority.

Virginia freshman Democratic Rep. Jennifer Wexton, who was previously a state senator, has proposed legislation in Congress to use credit card data to track gun purchases. The bill faces long odds on Capitol Hill. News about her idea has made it to Virginia firearms customers.

Rapp said his clients are increasingly concerned about privacy issues. Since the November elections, they've been purchasing with cash rather than credit cards.

Rapp, whose business includes gun safety training, says that some of the proposed legislation also affects his course instruction.

"From a gun place, the biggest [proposed legislation] that affects me right now, because we're a training company that sells guns, is if you are a trainer or if you train your son or daughter, that you could become a felon, but as a training place, we do safety," Rapp said. "We do training both from a basic pistol, rifle, shotgun to advanced combat shootings and tactical shootings for the military, law enforcement, three-letter agencies."

“Anti-gun billionaires who invested millions in the 2019 Virginia elections expect a return on that investment. While we mobilize our members and supporters to defeat Governor Northam’s political gun grab," said D.J. Spiker, NRA Institute for Legislative Action Virginia state director. "The NRA remains committed to working with those members of the General Assembly who are focused on finding real solutions to violent crime in Virginia.”

I wonder if VA will use credit purchases of guns for probable cause warrants.

It will be a felony to teach your child how to handle a firearm safely? This is evil.

Don't they know they're just going to have to turn around and give those ARs and magazines back?

I am rereading your first(?) book while watching it in real life.

For anyone who doesn’t already read Matt Bracken, his works are worth your time: https://www.amazon.com/Matthew-Bracken/e/B00350B7EU%3Fref=dbs_a_mng_rwt_scns_share

Open season on unarmed citizens by those who won’t follow the law as in street hoods.

I just read a litany of antigun quotes over the past fifty years. These ominous quotes emerged:

“There should be no such thing as anonymous ownership of guns.”

“There is no right of privacy when it comes to guns.”

That’s how these fascists think.

Given the information that is now out about Northam and the radical Rat’s plans, it is reaonable to surmise that a lot of these purchasers don’t intend to give their guns and magazines back. Nartham may push this until there are actual violent incidents and is probably what he intends. Virginia has a widespread 2A Sanctuary city and county movement that he threatening, too. I hope that court action will stop this insanity, but the Left wants a confrontation.

They won’t go into the hood to take guns, they only want to take the guns away from law-abiding White People.

They are wise to mistrust their government! A government may be benign at first, as it doles out benefits, but it always amasses more and more power, and always imposes stricter and stricter laws, and always restricts freedoms, so that, in time, all governments tend to become overpowering dictatorships.

There is infinite wisdom in keeping government small. Let them build bridges and pave roads, but keep them out of our lives in every other way.

NRA Life Member since around 1990.

I think Trump should direct the DOJ to look at law suit options to get a case up to the Supreme Court as soon as possible.

Lotta chit can happen when you start pulling that stuff.

WATCH the Gov’s other hand! While we have our eyes on this gun control schemes he may try to pass something else you don’t want!

“The only other person that was a better salesman right now is when we had President Obama...”

VA Governor giving 0bama a run for the money. LOL!

(I wrote and just published this on American Partisan.)

Rolling into 2020, all eyes are on Virginia following Governor Ralph Northam’s declared intention to pass onerous new gun control laws that could mandate the forced confiscation of common semi-automatic firearms which have been legal for Virginians to own for more than a century, ever since their invention. The first date in the coming showdown to be aware of is Monday, January 20th, when the Virginia Assembly opens for the new session, and Northam’s new gun laws will be considered. The Virginia Civil Defense League, a pro-Second Amendment group, is organizing a “Lobby Day” rally to be held at the state capitol to oppose these new gun control laws. It’s estimated that thousands of Virginians will attend the VCDL rally, many arriving in buses from all over the commonwealth.

In response to Northam’s plans, 90% of Virginia’s counties and many of its independent cities have declared themselves to be “second amendment sanctuaries.” After receiving vociferous pushback, Northam has recently stepped away from promising the outright confiscation of currently owned semi-auto weapons, and he is instead now demanding that gun owners register “grandfathered” weapons with the state government. Based on recent experiences in New York, Connecticut and other states that mandated registration, it’s assumed that very few Virginians will comply, instantly turning hundreds of thousands of otherwise law-abiding citizens into paper felons.

What will Northam’s response be to mass defiance of his gun control edicts? Common investigative tools could easily be used to locate non-compliant Virginians and arrest them on felony gun charges. At least some gun confiscation raids would inevitably lead to armed resistance, beginning a cycle of action and reaction that could, over time, grow into a low-intensity guerrilla conflict or a “dirty civil war.”

How plausible is this unwanted outcome? And what forms might a civil war over gun rights take? In certain respects we are in uncharted waters, because there are some new and unique variables in the known and studied civil war and counter-insurgency equations that are far out of line with available historical precedents. Chief among them: in all of history there has never been a civil war where, at the outset of hostilities, the resisting indigenous population was armed to the teeth with rifles capable of making 500 to 1,000 yard aimed precision shots. Never.

On average, approximately 64,000 people live in each of Virginia’s 133 counties and independent cities and towns, average land area 324 square miles. Measured another way, about 7,000 people live in each of Virginia’s 1,218 postal zip codes, average land area 42 square miles. About 250,000 Virginia state hunting license are issued each year, a small fraction of the total number of firearm owners. Now this is just a guess, but I’d bet that there are at least a hundred riflemen in every Virginia zip code capable of walking out their front door in the next five minutes, and making a rested 500 yard aimed precision shot. (For non-shooters, that means these marksmen can hit the man-size target they are aiming at.) And many of these marksmen are hunters and outdoorsmen who know their regional woods and forests like the backs of their hands.

[The rest of the 2,600 word essay is at the American Partisan link.]

I wrote EFAD in 2002, so that I’d have credibility when similar scenarios rolled out.

Small world. Meantime I had just found your article on WRSA and posted it on FR 6 minutes after this post. Great minds? LOL 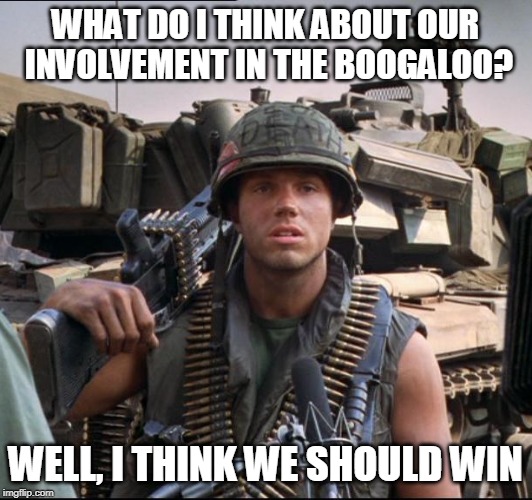