LONDON — President Trump sat down in a gilded chair beside President Emmanuel Macron of France on Tuesday, prepared for what has become a ritual of sorts on his home turf at the White House: He holds forth as another leader is left to smile stoically through his jokes, jabs and insults.

But Mr. Macron changed the script. By the time their 45-minute appearance at the American ambassador’s residence in London was over, the French leader had managed a rare role reversal, putting Mr. Trump on the defensive about his vision for NATO and his handling of a military conflict involving Turkey, and swatting away the president’s joke about sending Islamic State fighters from Syria to France.

“Would you like some nice ISIS fighters?” Mr. Trump said, crouching forward and claiming that “many” fighters had come from France. “I can give them to you.”

“Let’s be serious,” Mr. Macron, who sat coiled on the edge of his seat with one hand clamped firmly on his knee, replied. “The very large numbers of fighters on the ground are the fighters coming from Syria, from Iraq.”

The dramatic moment, which came as both leaders were in London to celebrate the 70th anniversary of the NATO alliance, underscored how a relationship formerly known for lingering hugs, lint-brushing and white-knuckle handshakes has devolved over divisions on matters ranging from terrorism to trade policy.

This time, the deterioration took place on live television.

“The president doesn’t like confrontation in person and doesn’t quite know how to react to being on the receiving end,” said Heather A. Conley, director of the Europe program at the Center for Strategic and International Studies. “Macron understands that. He’s decided the best defense is offense.”

WATCH THEIR CLASH OF WORDS HERE:

Macron needs to realize that he is allowing the same warriors he mentions here to flood into his country. I would say "before it is too late," but I suspect it might be past that point.

and the french plan?

oh i see... both hands raised above our heads?

In your dreams NYT.

We’ll see who gets the best of this over time.

In the video, it seed like Macron’s butt plug was chaffing.

Whose tense? Certainly not PDJT.

NYT Is full of sh*t as usual.

Bull, the French leader walked right into a carefully prepared trap Trump has been working on since he was sworn in.

The MIC is dead set against the US pulling out of Europe, Trump knows that and has been squeezing the EU countries to stir up resentment that will cause the usual reaction against the US being a nasty bully just because the US pays the most. That in turn leads to a consensus in Brussels for a reduced US personnel presence in the EU.

If the EU and European NATO members decide that they actually will spend more, they'll also dig in their heels over evolving NATO standards that make the arms market so comfortable for the US MIC. Telling the US that they don't need or want as many US troops in Europe will naturally follow. Consequently, it's easier for Trump to fight the MIC that kicks back billions to the Deep State.

It's a different front, but it's part of the same campaign in the same war that declaring Mexican drug cartels terrorists is a part of.

One noisy. One dominant.

Not a hard guess wh the alpha is.

Does anyone pay attention to the Times?

Apropos of nothing, it's been a long, long time since anyone in France chopped wood by hand.

“In Tense Exchange, Trump and Macron Put Forth Dueling Visions for NATO”

Trump could always just pull the U.S. all the way out of NATO and then let Macron have whatever vision Macron wants for NATO ...

13 posted on 12/03/2019 4:18:48 PM PST by catnipman (Cat Nipman: Vote Republican in 2012 and only be called racist one more time!)
[ Post Reply | Private Reply | To 2 | View Replies]
To: SeekAndFind
Once again once you watch the video you realize the main stream media is totally misrepresenting what happened. Trump's statement about the fighters is clearly made in a light hearted way -- and Macron knows it, so he starts his answer off by saying "seriously" to characterize his response as oriented to the actual problems.

When did that happen?

(And if it hasn’t, Macron should just shut his yap.) 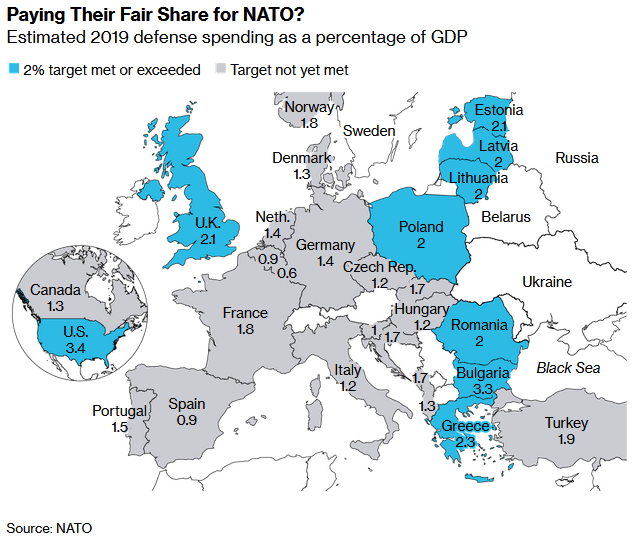 Europe is puffed up and incapable of being embarrassed.

NICE “humble opinion” Rashputin! Thanks for sharing it!