COLUMBIA, S.C. (Nov. 22, 2019) – A bill prefiled in the South Carolina House would make gold and silver coins legal tender in the state. Passage of this bill would take a step toward creating currency competition in South Carolina and undermine the Federal Reserve’s monopoly on money.

Practically speaking, this would allow South Carolina residents to use gold or silver coins to pay taxes and other debts owed to the state. In effect, it would put gold and silver on the same footing as Federal Reserve notes.

The phrase, “unless agreed upon by the parties” has important legal ramifications. This wording reaffirms the court’s ability, and constitutional responsibility according to Article I, Section 10, to require specific performance when enforcing such contracts. If voluntary parties agree to be paid, or to pay, in gold and silver coin, South Carolina courts could not substitute any other thing, e.g. Federal Reserve Notes, as payment.

South Carolina could become the fourth state to recognize gold and silver as legal tender. Utah led the way, reestablishing constitutional money in 2011. Wyoming and Oklahoma have since joined.

This is something of an oddball but worthy of a Federalist/Anti-Federalist ping. The Supreme Court’s decision in the Gold Clause cases of 1937 permitted abrogation of all gold contracts and cemented our Federal Reserve Notes as forced tender.

Thanks for the ping. Good thing for states to be doing.

This shouldn’t even be necessary. The Constitution is quite clear on what constitutes money and what States May use for payment of debts.

Hallelujah! The Republic is saved!

The Supreme Court was wrong.

Good idea, but I would step it up a notch by creating a special state gold repository.

1) Anyone could bring their gold there for assaying and purification to a high standard, like the Canadian Gold Maple Leaf (GML), of .9999 or 24 carat purity. Then it would be minted with a hologram (like a GML) for authenticity, and put in a special box to protect it. The person who brought it in would either get the coins or their cash value.

3) Unlike typical coinage, the face value of such coins could be near to or even higher than their value (typical maximum market value) as metal. So the state makes a profit when it sells such coins.

9 posted on 11/26/2019 8:11:08 PM PST by yefragetuwrabrumuy (Liberalism is the belief everyone else should be in treatment for your disorder.)
[ Post Reply | Private Reply | To 1 | View Replies]
To: Perseverando

Once he became Chief Justice of the SCOTUS, he declared ONLY GOLD and SILVER to be legal tender.

Good luck keeping it from becoming ‘funny money’ as soon as it hits the streets.

Even pure gold coins become fakes as quick as they get out the bank vault. 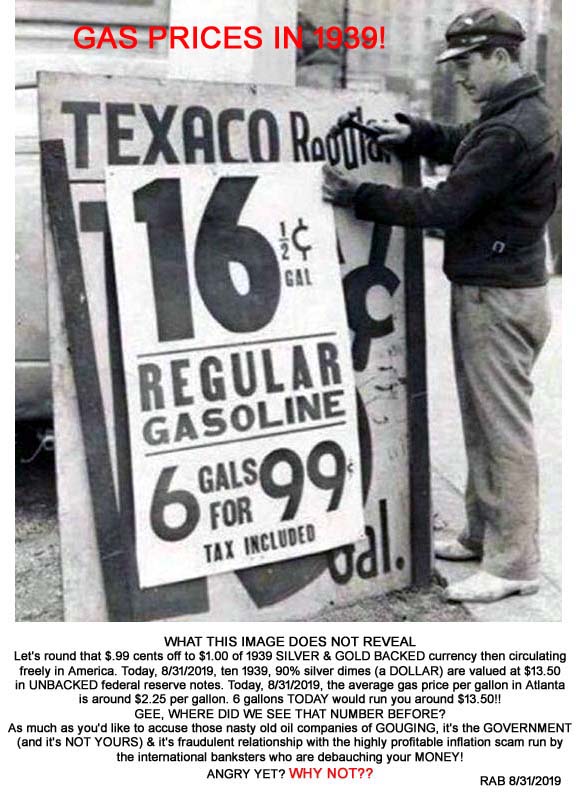 We are headed back to the gold standard for the USD. Goodbye inflation!

13 posted on 11/27/2019 3:45:28 AM PST by Candor7 ((Obama Fascism)http://www.americanthinker.com/articles/2009/05/barack_obam_the_quintessentia_1.html)
[ Post Reply | Private Reply | To 1 | View Replies]
To: Perseverando
South Carolina could become the fourth state to recognize gold and silver as legal tender. Utah led the way, reestablishing constitutional money in 2011. Wyoming and Oklahoma have since joined.

It'd be interesting to know how many transactions per year are done in gold or silver in these states, especially Utah since it's been legal there for eight years.

Why? If it's been legal in Utah since 2011 and the federal courts haven't stepped in yet then why would they do so merely because South Carolina is the fourth state to legalize it?

So a gallon of gas was the equivalent of 44% of your hourly rate. Today the equivalent would be gas for $3.19 a gallon. I don't know about you but I can fill up for about $2.35 a gallon in the KC area.

18 posted on 11/27/2019 5:10:15 AM PST by DoodleDawg
[ Post Reply | Private Reply | To 16 | View Replies]
To: Perseverando
This is kind of interesting. I'd not heard that other states had done the same as well. How do transactions work? Since the face value (in FRNs) of gold coins is far below their actual value. For instance, I have a 1oz U.S. gold piece minted last year that has a face value of $50, but today that coin would run you a minimum of $1456, for the gold content itself. Would you price things by weight? For large transactions, it wouldn't be that much of an issue, but you'd need fractionals to transact smaller items of value. Since it says you can use U.S. and foreign gold, would that also include rounds? This would be interesting as you can get private mint rounds down to a gram, or even less. I've seen leaf in 1/4 gram increments.

Another interesting idea comes to mind... Let's say you are called for jury duty. Could you demand to be paid in silver for the pitiful $5/day they pay you? If so, I'd like 5 silver eagles, which have a face value of $1, or would accept 5 pre-1933 Morgan/Peace dollars even though they are less valuable from an actual silver content point of view.

If I had a bunch of money to waste, I'd like to do exactly that, right here in Texas, which doesn't have such a law, since it says right there in black and white in the Constitution:

Section 10. No state shall enter into any treaty, alliance, or confederation; grant letters of marque and reprisal; coin money; emit bills of credit; make anything but gold and silver coin a tender in payment of debts; pass any bill of attainder, ex post facto law, or law impairing the obligation of contracts, or grant any title of nobility.

Since the state conducts most of it's business in FRNs, and the price was denominated in "dollars", it would be logical for Bob and Alice to argue that $20 in FRN was an appropriate tax, as the coins are issued by the U.S. government and are denominated in 'dollars'.