Is it safe to say we all loathe the son of a bitch?

Good sports analogy. Romney is like the NFL coach who has never won a playoff game ... complaining sanctimoniously about the coach who is attempting to win a second straight Super Bowl.

This from a guy who wears magic underwear and knows all the secret handshakes.

God forgive me for voting for him. I despise him a thousand times more than Bill Clinton or Obama.

Thankfully his magic underwear holds his ticket to Hell.

This nitwit moron is the King of Nitwits. I have seldom seen such an irritating loser.

Don’t forget Mittens belongs to a cult whose god Elohim has a body of flesh and bones and who has entitled them to rule over all of North America and that all Christian denominations are false and evil.

Look up “mormon secrets” and enjoy some vids. And have a very Merry Smithmas this December! 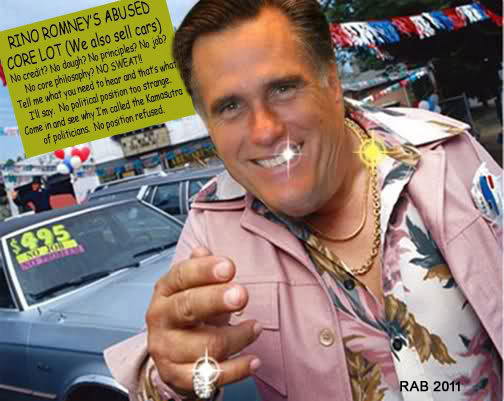 One thing that has crossed my mind: Once asked why he had Bill and Hillary as guests at his wedding he said “I had a lot of big plans for projects and I needed friends.”

One story said he made such an enemy of Jerry Nadler many years earlier and called Nadler “Fat Jerry” that Nadler vowed to destroy him by a vendetta someday and is now obsessed with that. Trump later blasted Jeb Bush and Romney and Kasich —all of whom do every possible thing they can to undermine and criticize him.

All his enemies are total wastes of space, true. But now headlines say “GOP in Senate has many who may turn against him in impeachment trial for past slights (paraphrased).”

Trump needs friends, not enemies. So what if he called them clever nicknames and enjoyed it? Now they can destroy his dreams of being the greatest President.

I bet Romney was only permitted to drive Ramblers when he was a teenager while his classmates drove Corvettes and called him a fairy.

He sure turned out rotten. (Said by someone who worked worked very very hard to get him elected )

It’s almost time to start warming up the lampposts. There really is a question of whether we are reaching a point of treason.

Romney is a skid mark on America’s underwear.

I’ll go out on a limb here, and say yeah. Hillary went carpet bagger to New York, Romney to Utah. They seem very similar in their failure to handle defeat well. Maybe they’ll meet each other begging for a drink from Gunga Din someday. For the uneducated leftist trolls here read the last of Kipling’s poem titled —- wait for it “Gunga Din”. :)

What would dumping Mitt be called. How about intelligent.

Then walk him over the edge of a cliff.

Milt IS loyal to his party.

The loser party of Dole, McCain and Romney

Hey mutt. You know all of your new democrat pals will turn on you instantly and you will treated as if you were Trump by the media and the dhims, or do you not get that?

He always was. The people who fell for the con-job in 2012 need to publicly apologize.

He even recites their NPC buzzwords. Next he’ll accuse Trump of gaslighting us.