Sen. Mitt Romney (R-Utah) ripped the administration over the recently announced cease-fire in Syria, calling President Trump's decision to withdraw troops "a bloodstain in the annals of American history."

Under the agreement Pence said Turkish President Recep Tayyip Erdoğan agreed to halt Turkey’s offensive in Syria for 120 hours in order to allow Kurdish YPG forces to evacuate. The agreement will also maintain a “permanent cease-fire” once the evacuation is complete.

Romney added the administration needs to explain what the U.S. role will be moving forward. And the cease-fire, he argued, does not change that the United States "abandoned" the Kurds.

"Adding insult to dishonor, the administration speaks cavalierly, even flippantly, even as our ally has suffered death and casualty," Romney said. "We once abandoned a red line. Now we abandon an ally."

[An area the size of Hawaii... if the Turks can hold it against Syria/ Kurds /Russia.]

Mitt is a good example of how Mormons mislead.

Mormons claim to identify as Christians to get people to trust them. I do not consider them to be.

Mitt tries to identify as a republican. He’s not.

Fool me once shame on you. That’s how I feel.

Mitch is a clueless A-hole.

“I am so ashamed that I voted for Romney to be POTUS.”

We should all thank Candy Crowley that this conniving weasel wasn’t elected.

I think one of you geniuses up there in the Puzzle Palace needs to explain what the hell the U.S. role has been moving backwards. LOL!!!

WTF Mitt? What is wrong with you? If I didn't know better, I'd wonder if maybe somebody should check to see if one of your kids sits on the board of directors for a Syrian Natural Gas firm at $50k a month. Why do these guys seem to get all exercised about the Turkish/Syrian border 7,000 miles away? Aren't "Open Borders" an unalloyed Good Thing™??

I would never have put it together if you hadn’t mentioned the massacre. Reading the wiki article, Nauvoo Legion and Nauvoo Mission were mentioned. Nauvoo was also the name of the huge space ship the Mormons built to seek their destiny in the Netflix series, “The Expanse”. The good guys commandeered it to save the planetary system.

Just one of those things I learned while looking up other things...always fun.

Mittens has his magic underwear in a wad again.


I’m a propagandist for America’s friends. The Syrian Kurds have taken a huge amount of punishment - far more than the Iraqi Kurds have done. They could have run away to Europe. They stayed and fought.


Trump’s comparisons to Normandy are inapt. Our “allies” there fought for the same reason as the Syrian Kurds - to keep their identities separate from a conquering power. Apart from the Soviets, who fought the Germans to avoid being killed to the last man, woman and child, after they helped the Germans kick off WWII, the US took the largest number of soldiers killed on European battlefields. The Syrian Kurds have lost about 10,000 dead. The US has lost 8. That’s how the Syrian Kurds have been way better allies than all of Western Europe combined.

Most of our so-called allies are little more than hangers-on. The Syrian Kurds are a big exception. And that’s why the Special Forces people on the ground aren’t too thrilled at the thought of abandoning them to their fate, even as they were fairly blase about getting out of Afghanistan and Iraq.

Pull the foreskin up over your face Romney and shut up.

I doubt 99% of Americans would understand the reference.

Romney in his prime wouldn't have made it to day two of boot camp. 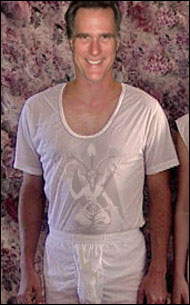 How scary is it that these warmonger scum talk like this? The other scary thing is that if the President did ramp up forces in the region to fight,these same a-holes would be screaming bloody murder.

Cyprus… good point!
Turkey has ‘played’ Europe over and over. Bet it affects their planning here.

Lot more anti-Turk forces here, though.
Though Assad wants the Kurds cleared for refugees in mostly the same places Turkey does.

But it’s Idlib that matters to everyone.
A quarter million Kurds displaced for refugees is, I’m sorry to say, not a big deal in the big picture.

Myth became rather quiet and uncurious about Benghazi, arms smuggling across the Mediterranean, and Syria after losing in 2012. I wonder why...

As much as I despise Barack Obama, and I do, I thank God that he saved us from a President Romney ( and a President McCain too).

I guess it proves that God really does work things for the best, even if it doesn’t seem so at the time.


Neither his nor his family evidently. I believe his sons never donned the uniform??