The near consensus view of President Donald Trump’s decision to remove US special forces from the Syrian border with Turkey is that Trump is enabling a Turkish invasion and double crossing the Syrian Kurds who have fought with the Americans for five years against ISIS. Trump’s move, the thinking goes, harms US credibility and undermines US power in the region and throughout the world.

There are several problems with this narrative. The first is that it assumes that until this week, the US had power and influence in Syria when in fact, by design, the US went to great lengths to limit its ability to influence events in Syria.

The war in Syria broke out in 2011 as a popular insurrection by Syrian Sunnis against the Iranian-sponsored regime of President Bashar al Assad. The Obama administration responded by declaring US support for Assad’s overthrow. But the declaration was empty. The administration sat on its thumbs as the regime’s atrocities mounted. They supported a feckless Turkish effort to raise a resistance army dominated by jihadist elements aligned with the Muslim Brotherhood.

Obama infamously issued his “redline” regarding the use of chemical weapons against civilians by Assad, which he repudiated the moment it was crossed.

As ISIS forces gathered in Iraq and Syria, Obama shrugged them off as a “jayvee squad.” When the jayvees in ISIS took over a third of Iraqi and Syrian territory, Obama did nothing.

As Lee Smith recalled in January in the New York Post, Obama only decided to do something about ISIS in late 2014 after the group beheaded a number of American journalists and posted their decapitations on social media.

The timing was problematic for Obama.

Our Gallant Allies, the Kurds (and other fairy tales)

[The final assumption of the narrative regarding Trump’s moves in Syria is that by moving its forces away from the border ahead of the Turkish invasion, Trump harmed regional stability and America’s reputation as a trustworthy ally.

On the latter issue, Trump has spent the better part of his term in office rebuilding America’s credibility as an ally after Obama effectively abandoned the Sunnis and Israel in favor of Iran. To the extent that Trump has harmed US credibility, he didn’t do it in Syria this week by rejecting war with Turkey. He did it last month by failing to retaliate militarily against Iran’s brazen military attack on Saudi Arabia’s oil installations. Whereasthe US has no commitment to protect the Kurds, the US’s central commitment in the Middle East for the past 70 years has been the protection of Saudi oil installations and maintaining the safety of maritime routes in and around the Persian Gulf.

The best move Trump can make now in light of the fake narrative of his treachery towards the Kurds is to finally retaliate against Iran. A well-conceived, and limited US strike against Iranian missile and drone installations would restore America’s posture as the dominant power in the Persian Gulf and prevent the further destabilization of the Saudi regime and the backsliding of the UAE towards Iran.]

5 posted on 10/12/2019 8:47:16 PM PDT by Zhang Fei (My dad had a Delta 88. That was a car. It was like driving your living room.)
[ Post Reply | Private Reply | To 1 | View Replies]
To: Zhang Fei
To the extent that Trump has harmed US credibility, he didn’t do it in Syria this week by rejecting war with Turkey. He did it last month by failing to retaliate militarily against Iran’s brazen military attack on Saudi Arabia’s oil installations.

President Trump would have completely destroyed his own credibility if he authorized the U.S. military to take action against Iran in response to an attack on a country run by a radical Islamic royal family. 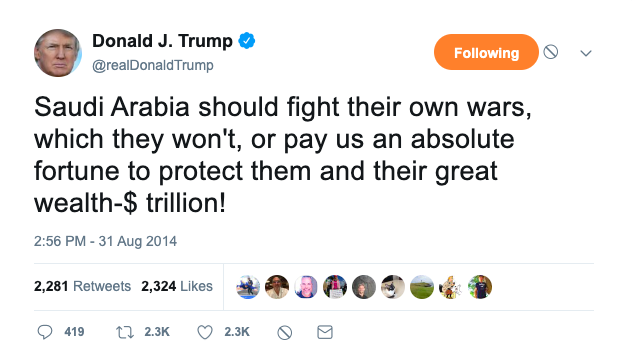 OK here is what is happening in Syria. We have 50 troops there plus some weapons makers who are testing weapons in limited live combat conditions. We are keeping this little war going, not to protect the Kurds, but to test military AI. We are literally running product tests for American AI weapons that are being tested on the Turks and Syrians.

This is not a real war. Its a limited battle that we keep going. It’s whole purpose is a test lab. Its like a war game. But in this case its live, so there are real casualties.

The Saudis have been bloodsucking us and backstabbing us for a very long time, let them defend themselves, the attack was either an inside job to raise oil prices or the result of total incompetence.

” He did it last month by failing to retaliate militarily against Iran’s brazen military attack on Saudi Arabia’s...

IDK
If someone wants our support let them show it... with moneyy “

Caroline is such a voice of reason when all is said and done.

He didn’t betray America. I don’t care about the Kurds or Syria or the middle east.

If the Turks do not listen to Trmup’s admonition that they prevent the 10,000 ISIS prisoners from escaping in the chaos, he better do something about it quick. All we need for international security, including our own is to have 10,000 of these guys and their families running around loose.

We will come to the aid of Saudi Arabia — and charge them a stiff price for it.

Thanks for the link

16 posted on 10/12/2019 11:00:21 PM PDT by Farcesensitive
[ Post Reply | Private Reply | To 15 | View Replies]
To: Alberta's Child
It seemed odd as I read that article that the author switched from arguing against war with Turkey to arguing for war with Iran. Why not both? Well no that would be double-stupid. Why not neither? Now you are talking.

Trump wants Iran to stop attacking Israel, stop building nukes, and mostly stop building missiles. That requires a credible threat of war but not a strike or two like the author envisions. Rather it is a pressure dampaign backed up with strong defense keeping Iran in a non-nuke box.

As for the Saudi radical Islamic royal family, the best we can do is keep them in their box but allow them to defend that box and help if necessary. Remember the lesson of the Cash Hoagie story: the anti-Saudis of which there are a variety, want to destabilize Saudi. That would have huge and awful consequences for the ME.

Why not castigate the Saudis for not retaliating?

Because that would make sense, and be intellectually honest.
Can’t have that.

I just love this. Dems are now in high dudgeon because President Trump is refusing to drag us into stupid wars.