("Son Of A Bitch Got Fired!": Joe Biden Brags He Forced Ukraine To Fire Key Official In Exchange For Money)

Former Vice President Joe Biden just casually dropped a bombshell admission that he personally and directly intervened in Ukraine's governance, boasting on stage during an event hosted by the US Council on Foreign Relations (CFR) that he got a high Kiev government official removed essentially at the snap of his fingers.

"I looked at them and said: ‘I’m leaving in six hours. If the prosecutor is not fired, you’re not getting the money,’" Biden said at the CFR talk on Tuesday, in what was a follow-up to prior admissions revealing that the United States actively asserted behind the scenes control of Ukraine's post-Maidan government, to the point that US officials even dictated who would occupy high offices in the war-torn country.

Biden confirmed what was only previously hinted at through an anonymous senior official who spoke to The New Yorker in 2016. It was revealed then that Ukraine's Prosecutor General, which the equivalent office to the US Attorney General, was removed only after the Obama administration threatened to withhold 1$ billion in loan guarantees.

The prosecutor general at the time, Viktor Shokin, was previously supported by the US and much of the EU, but as The New Yorker described, "after initially supporting Shokin, U.S. and E.U. officials soured on him." Washington suddenly viewed Shokin, who had served two decades within the Prosecutor General's office as corrupt and unwilling to initiate crackdown in major financial scandal cases involving high profile figures.

Ukraine's chief prosecutor serves a term of six years and can only be appointed and dismissed by the president with parliamentary consent; however in the case of Shokin, Joe Biden boasted before the CFR audience that he told Ukrainian President Petro Poroshenko and former Ukrainian prime minister Arseny Yatsenyuk sometime in late March 2016, "I’m telling you, you’re not getting the billion dollars," unless they immediately sacked Shokin. To the glee of his CFR listeners who laughed audibly, Biden added, "Well, son of a bitch. He got fired!"

Indeed the threat of withholding what had been the third installment of a massive loan package desperately needed to help prop up the new pro-EU/US Kiev government resulted in Viktor Shokin being hastily removed from his post by Ukrainian parliament on March 29, 2016 - within the very month Biden made the ultimatum (Shokin had initially promised he would willingly resign in a February letter, but resumed his work through March). Poroshenko then officially and formally dismissed Shokin on April 3, 2016.

But it appears that it was somewhat of an open secret as Shokin became widely referred to among Ukrainians as "the billion-dollar man". It was also a time in which Biden and other US officials were constantly in direct communication with President Poroshenko, talking foreign aid and loan packages, and presumably according to Biden's latest admission, how he should run his government.

Biden had previously disclosed in his personal memoirs that he “had been on the phone with either Poroshenko or… Yatsenyuk, or both, almost every week” for months attempting to guide nearly every major decision of the Poroshenko administration after the overthrow of Viktor Yanukovych in the 2014 coup d'état which inaugurated the Ukraine crisis.

As a reminder, in 2014 - not long after Ukraine's US-endorsed and facilitated presidential coup - Joe's son Hunter joined the board of directors of Burisma Holdings, the largest private gas producers in Ukraine, incorporated in Cyprus, a European tax haven.

Elsewhere in Tuesday's talk, Biden revealed that the Obama White House "spent so much time on the phone making sure that everyone from… [former French president Francois] Hollande to [former Italian prime minister Matteo] Renzi wouldn’t walk away" from anti-Russian sanctions.

We certainly hope that Biden continues to open his infamously big mouth as he will only further confirm (primarily through his penchant for boasting and self-congratulating) that the US version of events whether in Ukraine, Syria, or other parts of the world (spontaneous "democratic revolutions" championed by political figures who happen to take their dictates from Washington, etc...) is nowhere close to the reality.

Joe Biden: "Do I think they’re—I think the Donbas has potential to be able to be solved, but it takes two things. One of those things is missing now. And that is I’m desperately concerned about the backsliding on the part of Kiev in terms of corruption. They made—I mean, I’ll give you one concrete example. I was—not I, but it just happened to be that was the assignment I got. I got all the good ones. And so I got Ukraine. And I remember going over, convincing our team, our leaders to—convincing that we should be providing for loan guarantees. And I went over, I guess, the 12th, 13th time to Kiev. And I was supposed to announce that there was another billion-dollar loan guarantee. And I had gotten a commitment from Poroshenko and from Yatsenyuk that they would take action against the state prosecutor. And they didn’t."

"So they said they had—they were walking out to a press conference. I said, nah, I’m not going to—or, we’re not going to give you the billion dollars. They said, you have no authority. You’re not the president. The president said—I said, call him." (Laughter.)

"Well, there’s still—so they made some genuine substantial changes institutionally and with people. But one of the three institutions, there’s now some backsliding."

And a video of the full event:

Hannity started showing this video months ago on his show. Nobody picked it up until the President finally mentioned.

The power of the Bully Pulpit used right. 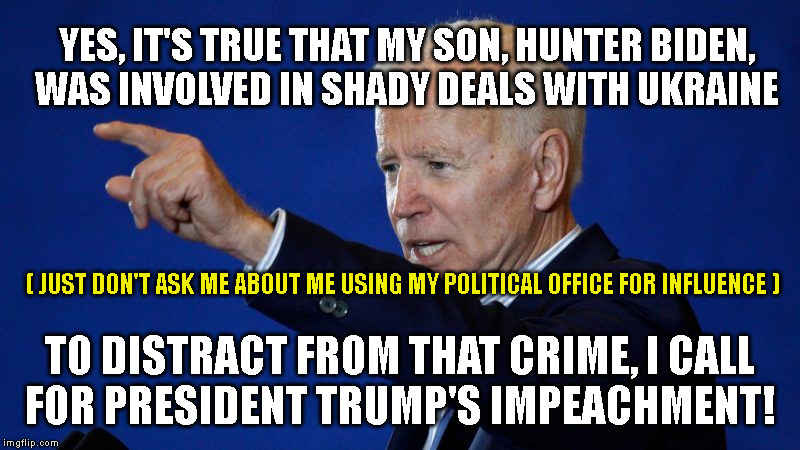 Plugs sealed his fate when he bragged about it.

& Obama
His hands are dirty in this as well..

Needs to become a broadcast ad from now through Monday. Air it on CNN, MSNBC, ABC, CBS, NBC, FOX...

They would probably refuse to run it. MSM thinks this is finally the way they get Trump and they are not about to allow anything to jeopardize it.

Biden’s actions and subsequent bragging are unseemly for sure, but I think this falls under the president’s clear constitutional authority to conduct foreign diplomacy. I would actually be quite surprised to find out the diplomatic corps doesn’t do a great deal of arm twisting, using American $ as carrots and sanctions or other punishments as sticks.

I also don’t think the Congress has authority to demand transcripts from the president regarding discussions he’s held with foreign powers in the execution of the president’s constitutional duties. 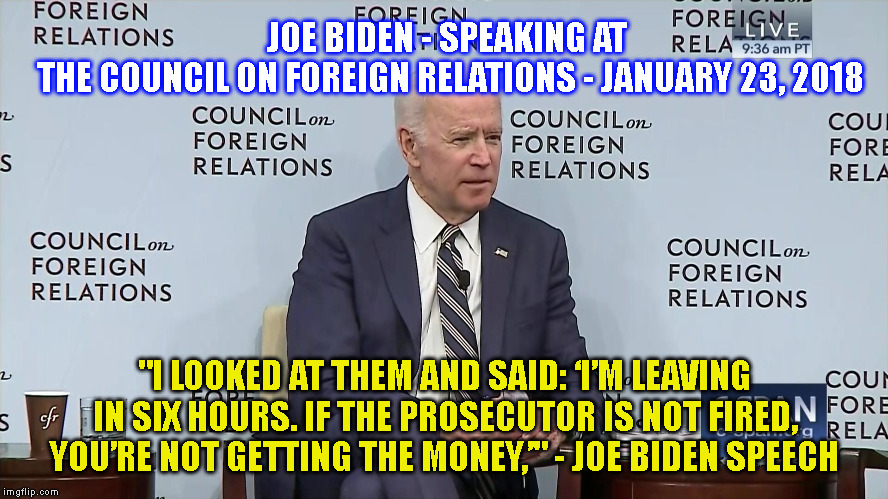 As I hear Joe "explain" this, it actually sounds good. He went over there and was "concerned about corruption" and there was a Ukrainian prosecutor who wasn't "doing his job right" and Joe the valiant statesman insisted that the prosecutor be fired.

Only, the real story is that Joe went over there, concerned that his son's corrupt practices might be exposed. And Joe found a Ukrainian prosecutor who was relentlessly pursuing corruption and exposing the people who contributed to the corruption. So Joe the valiant statesman insisted that the prosecutor be fired so that Hunter would get off Scot free.

Yet the media are not covering this fact, and neither are the far left focusing on it . Yet again their hypocrisy is on show for all to see and they are too dumb to see this.

Call your Senators, tell them to support this President, OUR President....why aren't they investigating corrupt Hillary...etc. etc.

I don’t know if we will have a civil war.

But this country desperately needs one. Desperately.

POINTS TO PONDER The fired Ukrainian prosecutor was ALSO investigating a Ukraine oligarch WRT a $5 billion IMF theft, ......simultaneously with the investigation of Hunter Bidens $3 million salary. What's the connection?

SALIENT POINT: The fired Ukrainian prosecutor was investigating all the Ukranian money being stolen. But he was fired when Joe Biden twisted his arm for investigating Hunter Biden’s extortion.....so the story goes.

The oligarch might have been Viktor Pinchuk, a mega-donor to the Clinton Foundation.

HMMMMMMM....Could be Obama kicked Joe's ass, peeved that Hunter only got $3 million of the missing $5 billion?

(HAT TIP THINDEN) On August 26, 2016, NY Associated Press reported on how the records of Clinton’s official diary as Secretary of State paralleled money flows into the Clinton Foundation. AP concluded that Clinton was meeting in her official capacity with those giving cash to the foundation.

“At least 85 of 154 people from private interests who met or had phone conversations scheduled with Clinton while she led the State Department donated to her family charity or pledged commitments to its international programs, according to a review of State Department calendars released so far to The Associated Press. Combined, the 85 donors contributed as much as $156 million. At least 40 donated more than $100,000 each, and 20 gave more than $1 million.”

Even this much from the AP had taken three years of pursuing Clinton’s meeting records and stonewalling by the State Department. In the AP report, and in the archive it had investigated, there is no mention of the Ukraine or the oligarch believed to be Viktor Pinchuk, a mega-donor to the Clinton Foundation. Pinchuk gave the Clintons $29 million. 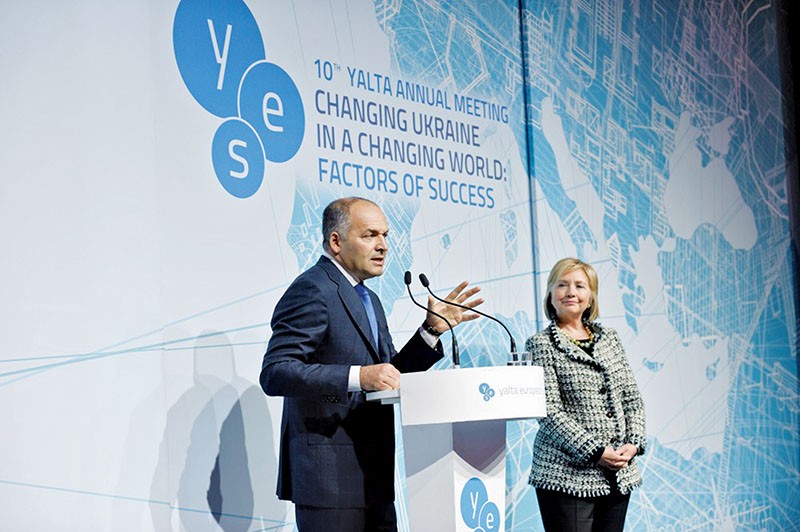 CIRCA 2013----Viktor Pinchuk hires Hillary to give a speech.

(HAT TIP THINDEN) This is the fight. Theft from Ukraine implicates all of the players from the Bidens to the Clinton Foundation to Obama. The Cyprus govt was called by OBAMA’S AMBASSADOR TO CYPRUS...AND TOLD TO REFUSE RETURN OF THE BIDEN MONEY. In a nutshell.......Obama's phony facade gets chipped away by the hour.